THE WASHINGTON POST – Before I say what I have to say about William Boyd’s new novel, Trio, let me first suggest that it might be great fun for readers keen to flee today’s soul-crushing social and political turmoil for the seemingly more innocent – and in this case madcap – cultural ferment of the late 1960s, in the faraway, louche land of Brighton (“the Las Vegas of England”, as one of the book’s characters observes). There, everyone’s a writer or director, an actor or photographer, or a bit of each, and the plight of a radical bomber can be played for laughs or pathos or a simple reminder that there really was something occasionally deadly happening in 1968 despite all the blinding sun and arc lights shining on Brighton Beach while characters of all persuasions were thrilling to the new freedoms afforded by the lifting of inhibitions as well as age-old decency laws.

Still, for all its brio, Trio hits some serious notes. It has a whiff of the ambivalent Graham Greene about it, waffling between the worldly gravity of The Quiet American and the sober farce of Our Man in Havana – as in fact the whole of Boyd’s celebrated oeuvre does, with its admixture of social, comic and recent-historical drama ranging light-footed all over the world. Here we are, of course, in Brighton in late 1968 with Elfrida Wing, a blocked writer; Talbot Kydd, a film producer; and Anny Viklund, a young American movie star – presumably the trio of the title, all in some way attached to the making of a film whose title, Emily Bracegirdle’s Extremely Useful Ladder to the Moon, seems to have been assembled from refrigerator word magnets. And so, come to think of it, does the movie’s plot, which involves Anny and her co-star, a British pop musician named Troy, breaking up and making up in long shot, wandering alone and driving around together, perhaps off a cliff.

Reggie/Rodrigo is married to Elfrida but is dallying with the script fixer – that it was another writer, Elfrida thinks, “made the betrayal all the more bitter”. Anny, who is caught between her fugitive ex-husband (the bomber) and her Parisian-Guadeloupean “radical revolutionary philosopher” boyfriend, is finding comfort, briefly, with her ingenuous, athletic co-star.

They all think and act like characters in a screenplay (Anny: “It was crazy – stop! She admonished herself. Get a grip … She hated herself for thinking this but she wanted to see him again – just once more.”) But they are in a screenplay, in a sense, and the movie Boyd has made of them may not be Bergman or even Capra, but it is, as I began by saying, diverting. 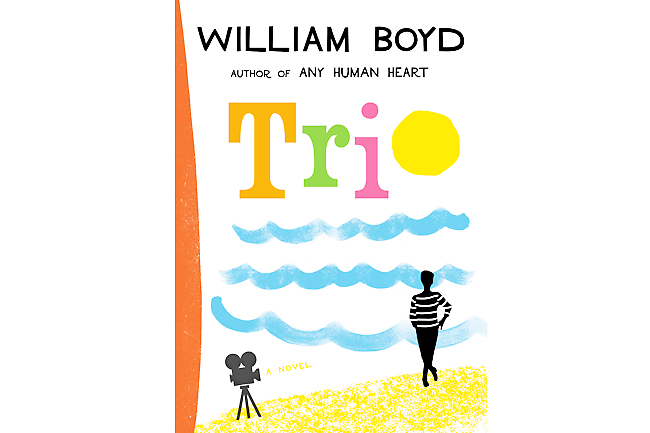