AFP – Social media fans are sure to be familiar with fake dimples, the sticky method, manga lashes, and the many other beauty tips that originated on TikTok this year. But were they really so successful?

In the age of social media, it can be easy to forget that real beauty trends aren’t just those that amass millions of views, but those that endure.

And this is the case with slugging, crying makeup, and the wolf cut, which have clearly influenced beauty routines in 2022.

Anything and everything goes on TikTok. So much so that trends – or micro-trends – sometimes emerge that aren’t really trends at all. This is especially true in the fashion and beauty sectors, where tips and inspirations can be counted by the hundreds.

However, real inspirations – those that have a lasting effect on our daily lives – can only be counted on the fingers of one hand.

Let’s take a look at three trends that originated on TikTok and which truly influenced beauty routines for the year 2022: 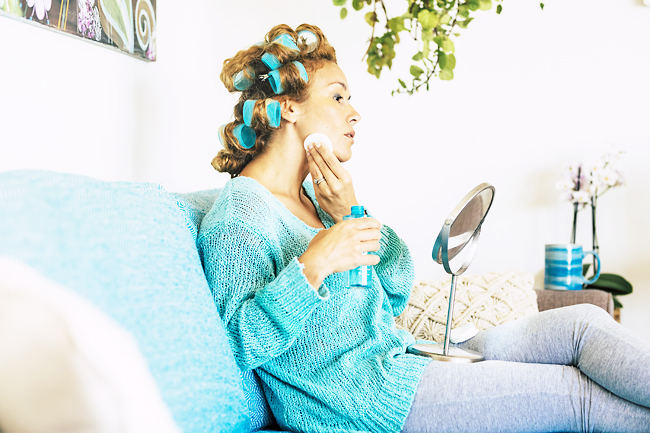 SLUGGING TO THE RESCUE OF DRY SKIN

K-beauty, or Korean beauty, is a driver of many trends on social networks. Here, proof comes in the form of slugging, the leading beauty trend of 2022, which has hundreds of millions of followers around the world.

Straight from South Korea, this technique with an improbable name involves coating the face with petroleum jelly all night long to help fight against certain winter ailments, starting with redness, itching and skin dryness.

With nearly 600 million views, the tip has been so successful that it’s given rise to dozens of videos from dermatologists giving their take on the trend.

Unusually, all of them have approved the technique, but they have also said that it’s suitable for all skin types, except those prone to acne. In fact, Vaseline can exacerbate this condition.

The trend has grown so much over the course of the year that it has spread to other parts of the body, with nail slugging and hair slugging.

CRYING MAKEUP IS AN ODE TO SADNESS

As incredible as it may seem, crying makeup has turned into a real beauty sensation over the months. The idea is to use makeup to make yourself look sad, as if you’ve been sobbing or are totally depressed.

Admittedly, the trend has never really gone beyond the borders of the virtual, but it has become a beauty must-have of the year.

To date, more there are more than 100 million views and counting for crying makeup, in turn derived from sadfishing, a trend that consists of expressing one’s most negative feelings on social networks.

As such, those who can’t (yet) cry on command can rely on blush to create the illusion of having cried. This is finished off with a slightly shimmering liquid eye shadow to perfect the ruse.

It’s a trend born on social networks and adopted by the most famous makeup artists on the planet, and which has never ceased to grow over the months.

THE WOLF CUT BRINGS THE MULLET UP TO DATE

We saw the wolf cut coming, accurately predicting that this updated version of the mullet would be a hit in 2022. And it was.

A retro-inspired hairstyle popularised by Billie Eilish, it has continued to appeal throughout the year, to the point of being elevated to the rank of star cut of 2022.

The once-mocked haircut – has scored no less than 2.3 billion views on TikTok, and is still being featured in new videos today.

The trend is such that users of the Chinese social network have created many tutorials to show others how to recreate the cut at home, not to mention the countless videos giving advice on how to style it on long, short or curly hair.

All in all, it’s a trend that shows that nostalgia, as well as the symbols of counter-culture, have strongly influenced last year trends, in fashion as in beauty.