PHNOM PENH, CAMBODIA (AP) – A treason trial against Cambodia’s opposition leader resumed yesterday, two years after it was adjourned due to the coronavirus pandemic.

Kem Sokha (AP pic below) was head of the Cambodia National Rescue Party when he was arrested in September 2017 on the basis of an old video showing him telling a seminar about receiving advice from United States (US) pro-democracy groups. If convicted, he could be sentenced to up to 30 years’ imprisonment.

The charge was widely seen as part of a political strategy by Prime Minister Hun Sen to sweep away all opposition before the 2018 general election, which his party won unanimously amid accusations the polls were neither free nor fair.

The popular opposition party was seen as a genuine electoral threat to Hun Sen’s Cambodian People’s Party. Kem Sokha’s arrest was swiftly followed by the dissolution of the party by the Supreme Court, after the government accused it of plotting a coup.

Hun Sen, who has held power for 36 years, has said he intends to stay in office until 2028 and has endorsed one of his sons to succeed him.

“The resumption of Kem Sokha’s trial in Phnom Penh after an almost two-year hiatus doesn’t alter the fact that these bogus, politically motivated charges should have never been brought against him in the first place,” deputy Asia director of Human Rights Watch Phil Robertson said in an e-mailed statement. 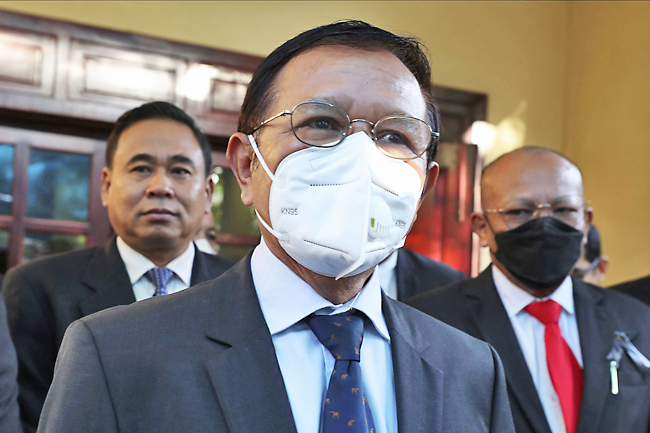 “This whole charade has been about preventing anyone from using the ballot box to meaningfully contest Hun Sen’s leadership, which is particularly important as commune-level elections are scheduled to be held across the country in mid-2022.”

Kem Sokha told reporters ahead of the hearing he hoped the court would drop the charges for the sake of national reconciliation. The trial began in January 2020 but was adjourned after a few days due to the spread of COVID-19.

Kem Sokha’s case has worsened his relationship with Cambodia National Rescue Party co-founder Sam Rainsy, who is in exile to avoid criminal convictions he said are politically inspired.

Sam Rainsy was the de facto leader of the party while Kem Sokha was in prison before his release on bail. There is tension between supporters of the two opposition leaders because some feel Kem Sokha had to face severe pressure from Hun Sen’s government while Sam Rainsy was free in exile.

The legal actions against Kem Sokha were widely seen as encouraging a split between the two. Hun Sen is an adroit political operator, and has a record of using divide-and-conquer tactics against his foes.