In October 2020, Brunei Darussalam’s total trade valued at BND1,470.0 million, a decrease by 1.7 per cent from BND1,495.0 million during the same month last year. Meanwhile, for month-to-month changes, total trade for October 2020 increased by 24.2 per cent compared to September 2020.

Total exports was also contributed by the domestic exports of other petroleum and gas products valued at BND127.6 million. 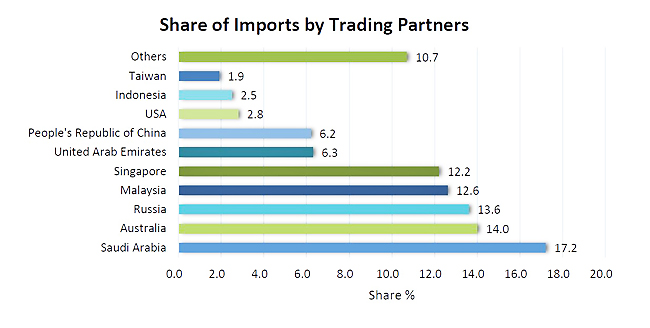 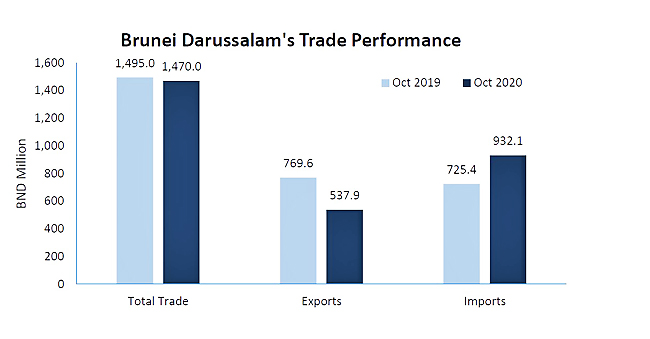 In terms of commodity by section, mineral fuels represents the major contributor to Brunei Darussalam’s exports with 82.2 per cent, followed by chemicals (16.4 per cent), machinery and transport equipment (0.6 per cent), crude materials inedible (0.3 per cent) and miscellaneous manufactured articles (0.2 per cent).

The main exports market in October 2020 was Japan (27 per cent) followed by the People’s Republic of China (16 per cent) and Thailand (15 per cent).

In ‘By End Use’ category, imports of intermediate goods accounted for 57.4 per cent of the total imports, followed by capital goods (38 per cent) and consumption goods (4.6 per cent).

For imports by trading partners, the highest share was from Saudi Arabia (17.2 per cent), followed by Australia (14 per cent), and Russia (13.6 per cent).

According to the mode of transport, the highest share was transport by sea, which amounted to BND1,390.1 million (94.6 per cent). This was followed by air transport (BND59 million or four per cent) and via land (BND20.8 million or 1.4 per cent).

The International Merchandise Trade Statistics (IMTS) for Brunei Darussalam adopts the General System for recording trade statistics, which covers imports, domestic exports, and re-exports. The full IMTS report for October 2020 is available from the Department of Economic Planning and Statistics (JPES) website at www.deps.gov.bn.