The Brunei public will be able to witness a rare total lunar eclipse on May 26, the first total eclipse in the country since July 2018.

The eclipse will come with a Supermoon bonus, where the full moon appears a little bigger and brighter due to its closer (perigee) position to the Earth during its orbit, said Astronomical Society of Brunei Darussalam (PABD) in a statement.

According to PABD, a lunar eclipse occurs when the Moon passes directly behind the Earth and being in the Earth’s dark shadow known as Umbra. Such occurrence is rare when the Sun, Earth and Moon are exactly aligned with the Earth being precisely in the middle.

This phenomenon is also observed by many regions around the globe such as East Asia, Australia, Pacific, North and South America.

In Brunei, the lunar eclipse will be first observed after the moon rise at 6.23pm.

If the evening sky is clear, eclipse watchers will see the full moon already partially obscured by the Earth’s shadows. At 7.11pm, it will be a very spectacular sight as the entire moon will pass through the Umbra.

During totality, eclipse observers will notice the full moon to completely darken and likely will turn to coppery red colour. 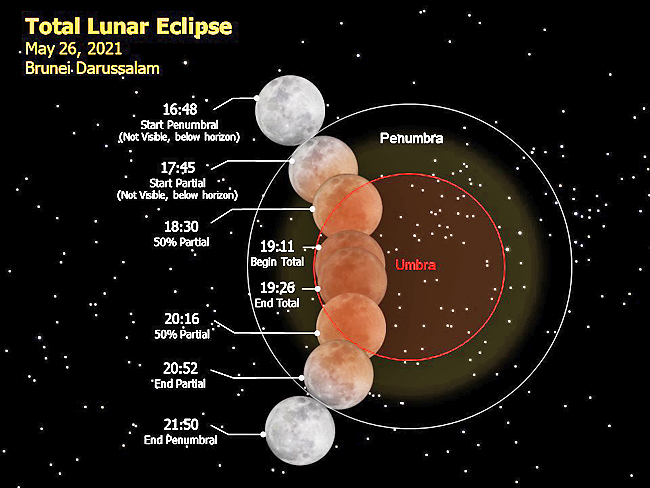 Totality’s duration will last for 14 minutes and 30 seconds. The moon leaves the Umbra at 7.26pm.

The briefest sight of totality is due to the moon passing remarkably close to the outer rim of the umbral shadow.

The eclipse also coincides with the Supermoon phenomenon. It is the total eclipse of the biggest full moon of the year. At closest distance of 357,500 kilometres, this spectacular event will cause the perigean eclipsed moon to appear larger-than-usual moon in the night sky.

The partial eclipse ends at 8.52pm, and sunlight will gradually reach the moon’s surface as the Earth’s umbra will leave the moon.

By then, the full moon is expected to return to its normal brilliance. Unlike solar eclipses, lunar eclipse is completely safe to watch with the naked eyes. As the elevation of the moon will be rather low during the eclipse, the event will be best observed from this country at places with an unobstructed view to the horizon in the East.

The PABD in collaboration with Temburong District Office, Ministry of Home Affairs, and Astronomy Club of IGS College will organise a Total Lunar Eclipse and Supermoon observation for the public from 5pm until 9.30pm, on May 26 in front of Bumiputra Complex, Temburong District.

Telescope viewing is available for members of the public to gaze at the phenomena. Admission is free of charge. The next lunar eclipse will occur on November 2021, but it will be a partial one. 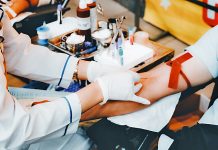 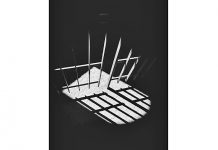