The company, which began accepting reservations in Japan last autumn, now hopes to promote the hoverbike overseas, mainly to wealthy people in the Middle East and the United States (US).

ALI is expected to announce the move at an event to be held in Monaco on Wednesday. The flying bike developed by ALI, Xturismo, hovers several metres above the ground using propellers.

Hailed as next-generation mobility, the hoverbike will likely be used in a wide variety of scenes, including rescue operations in disaster-hit areas. In March, the hoverbike was brought into the spotlight when manager of the Japanese professional baseball team Hokkaido Nippon-Ham Fighters Tsuyoshi Shinjo, made an entrance on the vehicle at a ceremony marking the team’s first home game of the season.

As hoverbikes are only allowed on privately-owned land under the current laws in Japan, ALI has received only a small number of domestic orders. 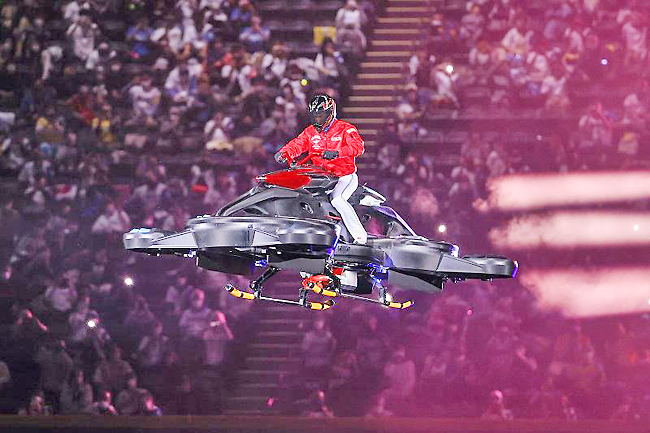 The company, however, has already received many inquiries on the product from government organisations, companies and the rich in nations in the Middle East, where regulations on such vehicles are lax. As the hoverbike is well-suited to operate in deserts, it can be used for border security.

In the United States (US), the hoverbike is attracting attention mainly from industries related to filmmaking and racing events.

Given these developments, ALI has concluded that it will enjoy bigger demand for the hoverbike abroad than in Japan.

Currently, ALI makes the hoverbike only in Japan. But it plans to start manufacturing the product soon in the Middle East, in line with the full-scale launch of the vehicle abroad.

The Xturismo costs USD777,000. The company plans to start accepting orders from abroad on Thursday for delivery beginning early next year.