To make pandemic recess fun, a principal turns to ‘old school’ games from her childhood

THE WASHINGTON POST – The principal stared across the grassy lawn at the fourth- and fifth-graders, standing masked and six feet apart in a ragged line against a wooden fence.

“All right,” Ingrid Bynum called through her own mask, and the children leaned forward, many holding their breath with anticipation. Bynum, 52, put her hands on her hips. “Do I need to explain the rules again?”

A chorus of “NO’s” and “We got it” – and some cries of “C’mon already!” – came from the fence. Bynum smiled and gave her audience what it wanted: She raised and lowered both hands, kicking off the first round of ‘Mother May I.’

Almost a year-and-a-half into the coronavirus pandemic that upended every aspect of the American schoolday, this was what recess looked like at Patrick Henry K-8 School in Alexandria, Virginia, on a recent Wednesday morning. Children in first- through fifth-grade forewent the snazzy playground equipment – the brightly coloured slides, the monkey bars, the tyre swing – and instead spent their 30 minutes in the sunshine playing ‘Mother May I,’ or ‘Simon Says’, or ‘Red Light Green Light.’ 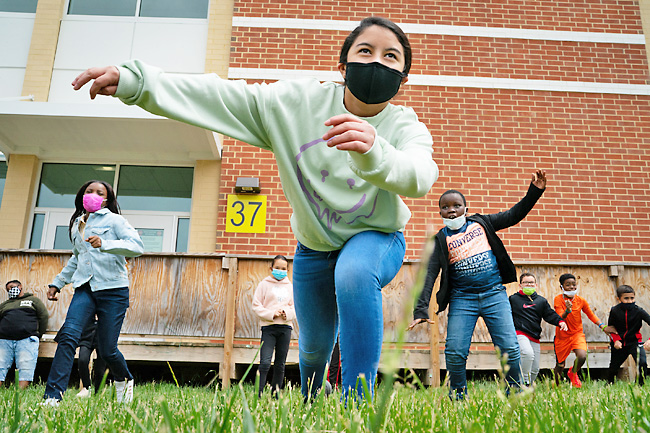 Amanueal Wondimu, 11, was one of the children for whom the games were totally new. He stood along the fence yelling “Mother May I” just as loud and fast as his classmates, even though he had only learned the rules a week or so before.

“At first I was like, ‘What is this game?’ but then I got used to it,” Amanueal said later. “Recess is different than before, but I’m getting used to playing these other games, and it still makes me happy, just like before.”

As was the case for children in school districts nationwide, Amanueal had spent the last half of fourth-grade and most of fifth-grade learning remotely, from inside his house. Class had been online-only in Alexandria City Public Schools for upward of 12 months. Children only began returning to classrooms, slowly and in small groups, in the spring.

The return ushered in a host of perplexing questions, not helped by shifting guidance from the federal government on issues such as the proper spacing between desks. As Alexandria’s superintendent, school board and hordes of central-office administrators worked through complex plans to improve school ventilation systems, and figured out how and where to hold lunch, Bynum and her peer principals honed in on an issue they felt was just as pressing: What to do about recess.

Playground equipment was a no-go during the early months of the return to school. To meet federal and local health guidance, Bynum would have to ensure that an adult wiped down every single structure immediately after a child used it.

“We have a big playground with tall structures,” Bynum said. “Who on earth is going to be the person who would climb to the top of the spiderweb and clean that?”

Also nixed were contact sports including soccer or the popular ‘Blob’ game, a form of tag in which every tagged student joins an ever-growing mass of children careening around the playground. Plus, children would have to stay masked outside, which would make vigorous physical activity difficult for some.

The stakes, Bynum said, could not be higher. Recess would be top of mind for any elementary-schooler heading back into classrooms. Not once, in her more than two decades of working in education, has she ever met a student who did not tell her recess was their favourite time of day.

Recess would be especially important after more than a year in which children did not get many, if any, chances to play outdoors with other children their age.

Amanueal, the fifth-grader, said he took daily breaks from online schooling at around the same time recess used to happen. Sometimes he was able to play with his little brother, and they went outside when the weather was good. But it just was not the same.

“It would have been way more fun,” he said, “if I had actual recess.”

Another Patrick Henry student, nine-year-old Noelle Nelson, said she spent many of her online recess breaks watching television with her two younger sisters. But Noelle, who is a fast runner, wanted more than anything to be outside playing tag with the boys again – and outrunning every one of them to their shock and awe.

The first group of roughly 60 children at Patrick Henry returned to classrooms during the first week of March. For every other week thereafter, more and more students came back, until about 300 children who selected in-person learning – about a third of the school – were back on-campus.

For the first few weeks, “recess” meant instructors leading children on socially distanced walks around the neighbourhood near the school. But as Bynum watched students with bored expressions file past her front-office window every day, she longed for another solution.

In late April, she had an idea – one stemming from her childhood in Richmond.

“I grew up in the inner city, we had one slide and one working swing, a couple balls and hoola hoops,” Bynum said. “The best part about recess was always playing games.”

She decided she would teach her students her favourite group games, all of which lent themselves easily to social distancing. Sometimes the principal had to teach her staffers, too: “The millennials don’t seem to know ‘Mother May I’,” Bynum said.

At first, Bynum piloted the new version of recess with a small group of fourth- and fifth-graders, leading every game herself in a grassy patch abutted by a wooden fence just out front of the school. The children loved it so much that Bynum and her staff swiftly expanded the programme – pretty soon every grade, except for the too-young kindergartners, were lined up along the fence, leaping and laughing. Other staffers had to step in to conduct the activities, although Bynum tries to make it out at least twice a week.

By late April, as vaccinations proceeded and Virginia coronavirus case rates declined, the Alexandria school system decided it was OK for children to start using the playground equipment again. But, to Bynum’s astonishment, many of her students said they would rather keep playing ‘Red Light Green Light.’

Today, children get a choice every recess – they can play on the playground if they want, or they can stick around for group games. At least a half-dozen always choose the games, Bynum said.

She said she hopes to keep holding the games long past the pandemic. They instill skills that are good for young people to master: the art of cooperation, following directions, speaking up for yourself, learning that not everybody will be a winner every day.

“They realise it’s OK they’ve lost today,” Bynum said, “because they can always come back and win in ‘Mother May I’ the next day.”

On Wednesday, Noelle – bundled into a light-pink sweatshirt against the springtime cold – stood with her legs apart, arms slightly akimbo, locked into a track star’s almost-crouch. “Mother,” she called, “may I run for five seconds?”

Then she was off, a pink blur sprinting faster than anyone else, faster than any boy she knew – just like she had pictured all those long, lonely months at home.