THE WASHINGTON POST – Spring is in the air – and so is intrigue and mayhem – in five first-rate new mysteries and thrillers out this month and next. These twisty, smartly told tales will help put the long, dark winter behind you.

THE COOK OF THE HALCYON BY ANDREA CAMILLERI

Before he died in 2019 at age 93, novelist and film director Andrea Camilleri wrote in an author’s note that he had adapted the 27th Inspector Salvo Montalbano mystery from an unproduced screenplay.

That novel, The Cook of the Halcyon, despite a bloody shootout in the final chapters, is more Buster Keaton than Quentin Tarantino. What makes it especially worth reading – and essential for fans of the series – is the chance to watch the Sicilian next-meal-obsessed, endearingly cranky Montalbano grapple with an international drug cartel, an exasperating Italian law enforcement bureaucracy and the atrocious cooking of his beloved girlfriend, Livia. He survives all three, if just barely. 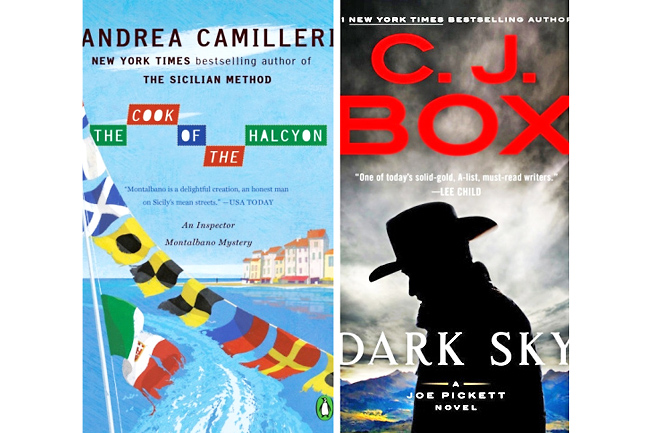 Attacked by sadistic rustics with a social media gripe, the owner of the Facebook-like ConFab tells Pickett that if he dies in the wilderness at least “it’ll go viral”. Pickett Number 21 is both wry and exciting, with an apparent cliff-hanger ending anticipating an equally gripping Number 22.

In her thrillingly good third novel, Flynn Berry shows a le Carré-like flair for making you wonder what’s really going on at any given moment. Set in Northern Ireland in the final year of “the Troubles”, the novel centres on new mother and harried BBC News producer Tessa Daly. Her sister, Marian, might be an IRA bomb maker – or could she be an MI5 informer?

Either way, the lovingly drawn Tessa is herself soon up to her neck in nightmarish intrigue. Both the IRA and the British military are portrayed here with an exacting lack of sentimentality. Berry won an Edgar for Under the Harrow in 2017. Here comes another contender.

THE POSTSCRIPT MURDERS BY ELLY GRIFFITHS

“I don’t want to be rude . . . but I think you’ve been reading too many crime novels,” a snarky panelist at a book festival advises three jaunty amateur sleuths in the second Detective Sergeant Harbinder Kaur mystery.

(The first, The Stranger Diaries, won an Edgar in 2020. Griffiths also writes the Ruth Galloway, Edgar Stephens and Max Mephisto series.) Kaur, who calls herself “the Best gay Sikh Detective in West Sussex” is just one of a delightful cast of characters who could be out of an old Ealing comedy like
The Lavender Hill Mob. There are echoes of Dame Agatha, too, when the first of several murder victims in this droll romp is a latter-day Miss Marple.

CIA Russia Division factotum Lindsey Duncan, in hot water after an affair with an MI6 agent in Beirut, is assigned to ferret out a mole in either Moscow Station or Langley.

But is Duncan herself being manipulated by a sinister figure inside HQ? Fans of FX’s The Americans will recognise a world where professionalism can fall prey to sexism, careerism and garden-variety klutziness. Duncan’s job is a lot “like juggling knives”, and Katsu makes us care that she doesn’t bobble.