THE WASHINGTON POST – Though the start of 2021 certainly looks and feels different from Januarys past, certain aspects of the new year remain the same. For many, that is taking the time to reset mentally, emotionally and physically.

While we aren’t quite experts in the first two areas, we can certainly help with the last in terms of what we put into our bodies and how that might make us feel. So to start the year, we’ve developed three nourishing soup recipes for anyone who is in need of such dishes.

For Olga Massov, that looks like a fragrant, restorative chicken-and-rice soup; G Daniela Galarza shared a version of Italian wedding soup; and I developed a recipe for an easy farro-and-kale soup with peanut butter and a hint of spice.

Each brings the warmth, comfort and flavour you might desire this time of year without leaving you feeling weighed down and ready for a nap immediately after eating.

As a Russian immigrant, I grew up with a familiar collection of Eastern European recipes: latkes, sharlotka, borscht. But it’s the chicken soup that I remember most vividly from my sick days as a child. Eating the soup made me feel like I was slowly being brought back to life.

A few years ago, I was working as an editor at Phaidon, and my boss asked me to edit a manuscript from Elizabeth Street Cafe, the popular Vietnamese-inspired restaurant in Austin, Texas. One of the recipes was a comforting, congee-like chicken-and-rice breakfast soup. Eating it made me feel nourished and restored. I made it over and over, tweaking here and there, and finally creating my own version, an amalgamation of the Eastern European and Asian traditions: looser, brothier, but every bit as aromatic as the original. – Olga Massov 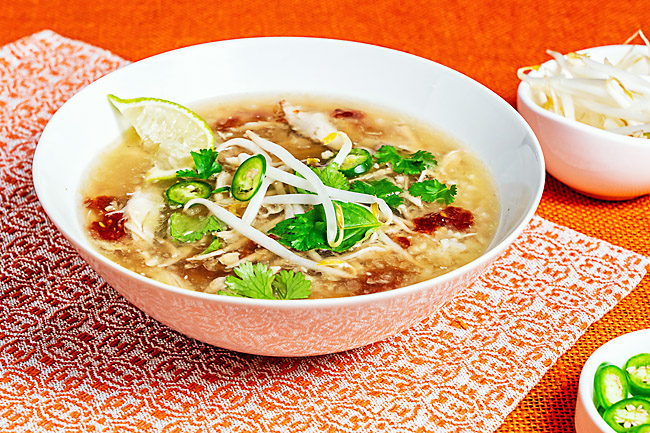 Half bunch fresh cilantro plus more for garnish

One tablespoon kosher salt, plus more to taste

One to two tablespoons fish sauce, plus more to taste

One cup glutinous white rice, or your favourite rice

Chili-garlic sauce, such as sambal oelek, for serving (optional)

Cut the chicken into eight pieces: two breasts, two wings, two thighs and two legs; reserve the backbone for another use such as making stock.

Heat a large, heavy skillet such as a cast-iron pan over high heat until smoky. Add the onion and ginger, cut/exposed side down, and dry-roast until both are blackened on one side, about seven minutes. A nice char on the vegetables will get deeper flavour in your stock. Transfer the charred vegetables to a plate.

Reduce the heat to medium and add the cloves, star anise and cinnamon. Toast, stirring occasionally, until fragrant, two to four minutes.

Transfer the charred vegetables and toasted aromatics to an eight-quart stockpot. Add the chicken pieces, kombu, cilantro, salt and peppercorns. Add enough water to cover and bring to a boil over high heat, then lower the heat to a simmer and cook, skimming off and discarding any foam that rises to the top, until the chicken breasts are firm to the touch, about 25 minutes.

Transfer the chicken breasts to a medium bowl and cover with a plate or a piece of foil to prevent the meat from drying out. Set aside until cool enough to handle, then discard the skin and any remaining bones, and shred the meat. Transfer the meat to a lidded container and set aside or refrigerate until needed.

While the chicken is cooling, partially cover the pot and continue to gently simmer the stock. Stir occasionally, skimming any foam that rises to the top, until the vegetables look nearly falling apart, two to three hours. Add more water, as needed, to ensure the chicken and onions remain submerged. Remove from the heat and let cool until warm. The stock will be fragrant and a deep, dark golden colour.

Ladle the stock through a large cheesecloth-lined fine-mesh sieve set over a clean pot or large bowl. Rinse out your stockpot and return the stock to it. Discard the aromatics and vegetables; separate the chicken thigh and drumstick meat from the bones and shred (discard the skin).

Bring the stock back to a lively simmer, taste, and season with one tablespoon of the fish sauce and two teaspoons of the sugar. Stir, wait a few minutes and taste again, adding more fish sauce and sugar, if needed. Add the rice and cook until the rice is tender, about 15 minutes. Add the shredded chicken – light and dark meat – to the soup and let it warm through, about two minutes.

Ladle the soup into bowls and garnish, if using.

The story behind the recipe we call Italian wedding soup is as hearty and layered as the dish itself.

Something was lost in translation when Italian immigrants brought their recipes for minestra maritata to the young United States (US). Literally ‘wedded soup’, it has nothing to do with weddings: Its name refers to the delicate marriage of disparate ingredients in each bowl.

For this recipe, based on a memory of the one my babysitter used to make me when I was a kid, I’ve taken some liberties, using store-bought stock (use homemade if you have it!) and pre-cooked chicken sausages (they add an easy hit of flavour). Then, quickly mixed and shaped meatballs are roasted before they’re added to the fortified broth along with lots of chopped kale, escarole, spinach or chard. Lemon juice and zest offset the rich, meaty flavours and perk up the bitter greens. – G Daniela Galarza

Half cup grated Parmesan cheese or pecorino Romano cheese, plus more for serving

One teaspoon kosher salt, plus more to taste

Half teaspoon freshly ground black pepper, plus more to taste

One large lemon, zested and juiced

Sprigs of dill, for garnish (optional)

In a large Dutch oven or heavy-bottomed pot over medium-high, add the olive oil and sausage and saute, stirring every so often, until browned on both sides, two to four minutes. Increase the heat to high and add the carrots, celery and stock. Cover, bring to a boil and cook until the carrots and celery are tender, 10 to 12 minutes. Remove from heat.

Meanwhile, make the meatballs: Position a rack in the middle of the oven and preheat it to 425 degrees.

In a large bowl, add the milk and egg and whisk lightly. Add the slice of bread and soak for five minutes. Add the ground turkey, cheese, onion, parsley, garlic, salt and pepper to the soaked bread and mix with your hands until combined. Rinse and moisten your hands with cool water and then shape the mixture into one- to two-inch meatballs; you will have 30 to 35 meatballs. Place them, spaced evenly, on a large, rimmed baking sheet. Bake for 10 to 12 minutes; meatballs will finish cooking in the soup.

Return the heat to high under the soup. As soon as the broth comes to a boil, stir in the pasta and simmer until al dente, four to six minutes. Lower the heat to medium, and stir in the chopped greens, red pepper flakes, if using, and half of the lemon zest; reserve the remaining zest for garnish.

Using a spatula, scrape the meatballs and any fat and crispy bits stuck to the pan into the soup. Increase the heat to high and cook until the greens soften and the meatballs are cooked through – cut into one to be sure it’s no longer pink in the centre.

Add half of the lemon juice; taste the broth, and season with additional salt and pepper, if desired.

My idea for this farro, kale and peanut butter soup started with Lukas Volger’s peanut butter and greens sandwich from his latest cookbook Start Simple. The sandwich consists of marinated greens, peanut butter and a drizzle of sriracha layered between two slices of bread that get toasted, a la grilled cheese. Though I was quite skeptical at first, I was hooked after my first bite, and have now borrowed that flavour profile for this soup – nuttywith a hint of spice.

I tested this recipe using creamy peanut butter, but I imagine any style of nut butter should do. Similarly, curly kale – or whatever dark, leafy green you fancy, such as collard greens or Swiss chard – is bound to be a suitable replacement for lacinato/Tuscan kale. – Aaron Hutcherson

One teaspoon kosher salt, plus more to taste

Half teaspoon ground black pepper, plus more to taste

In a large pot over medium heat, add the oil and heat until shimmering. Add the onion, jalapeño, salt and pepper and cook, stirring occasionally, until the onion starts to soften, about five minutes.

Add the garlic and cook until fragrant, about 30 seconds. Add the farro and cook for two minutes, stirring occasionally. Add the tomato paste and cook, stirring regularly, for one minute.

Add the vegetable stock, scraping up any bits stuck to the bottom of the pan, and bring to a boil, then reduce to a simmer, and cook, with the lid slightly ajar, for 20 minutes, stirring once or twice.

Add the kale and continue simmering, stirring once or twice, until the flavours come together and the farro and kale are tender but still retain some bite, about 20 minutes more.

Stir in the peanut butter until fully combined. If you prefer a thinner soup, add half to one cup more stock to reach desired consistency. Taste and add more salt and pepper, as desired. Let cool slightly before serving.