A vehicle, which collided with another vehicle at Kampong Tanah Jambu, burst into flames on Saturday morning.

Eight firefighters from Muara fire station, led by DSO Abas bin Haji Ahmad, responded to the incident, according to the Fire and Rescue Department (FRD).

Upon arrival, firefighters found two vehicles had collided and one engulfed by fire.

The firefighters doused the fire in three minutes. The cause of the fire and estimated losses are under investigation.

In light of the incident, the FRD advised the public to ensure their vehicles are safe for use, with no leakages that can cause flammable liquid to flow to the hot engine block or electric system as it could spark a fire.

To obtain the Land Transport Department’s (JPD) accredited vehicle workshops and inspection stations, the public can download “Understanding Your Vehicle” booklet through www.mtic.gov.bn/vehicle/Home.aspx. 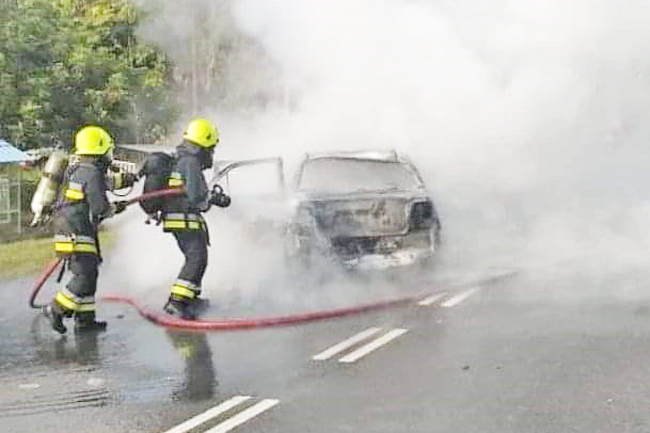