A foreign worker was detained for failing to show valid document and overstaying during an operation conducted on Tuesday by the Immigration and National Registration Department (INRD) enforcement officers in their latest ‘SAKAT JIPK’ operation.

The offender was caught at a rented house in Mukim Kilanas for violating Section 15 (1) of Chapter 17 of the Immigration Act and may face imprisonment not less than three months and not exceeding two years as well as lashes not less than three times.

His work pass will be cancelled and deported to the country of origin and may be blacklisted.

Employers recruiting and harbouring any immigration offenders can face a BND3,000 fine.

Meanwhile, two foreign workers nabbed at a rented house in Mukim Sengkurong were brought to the enforcement division of INRD also for violating Section 15 (1) of the Immigration Act, Chapter 17 for failing to show valid document and overstaying. 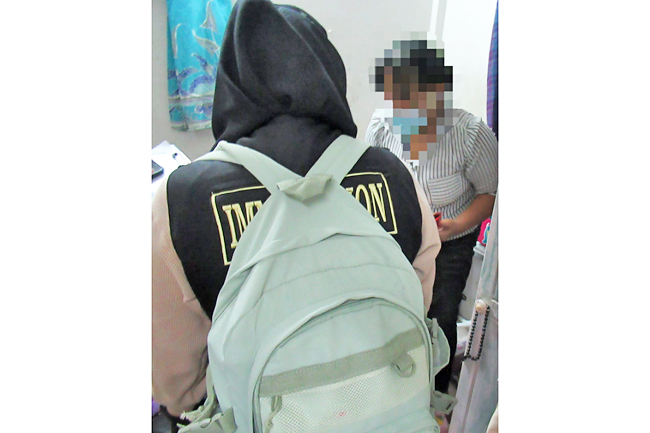 The female foreign worker, who is also wanted as a runaway worker, was caught for violating immigration pass conditions that leads to imprisonment of not less than three months and not more than two years and caning of not less than three lashes. The INRD reminded the public that operations to investigate and arrest errant workers violating the law according to the stated jurisdiction are continuing.

Patrols, operations and inspections are conducted based on information and cooperation from the public following information gathered, either privately or with other enforcement agencies.

The operations are also conducted to enforce the Prevention of People Smuggling Order, 2019 and the Anti-Trafficking in Persons Order, 2019 and any activities that are against the law and regulations in Brunei Darussalam.

Meanwhile, the public is reminded that legal action will be taken against those employing immigration offenders.

The INRD welcomes the public to provide any information related to immigration offenders.

Information and the identity of the whistleblower will be kept confidential. The public can contact the INRD Hotline at 8734888 and 8753888.