Things are looking up with these ceiling painting tips

THE WASHINGTON POST – My husband and I are moving to a house with a complicated room, a room that requires a vision.

We had selected a colour for the space in question, a den-like, narrow family room with a feature fireplace: Benjamin Moore’s Bavarian Forest, a deep shade of blue-green.

But the line that determined what was ceiling and what was wall was uncertain, my painter pointed out, which was why he suggested it.

“I think you paint the ceilings,” he said. I imagined the room swathed in deep green, from the trim to the brick fireplace to, yes, the ceilings. He was right. I told him to do it.

Extending colour to the ceiling can add visual interest, texture and sophistication to a room. Here’s why and how you should implement it in your own home. 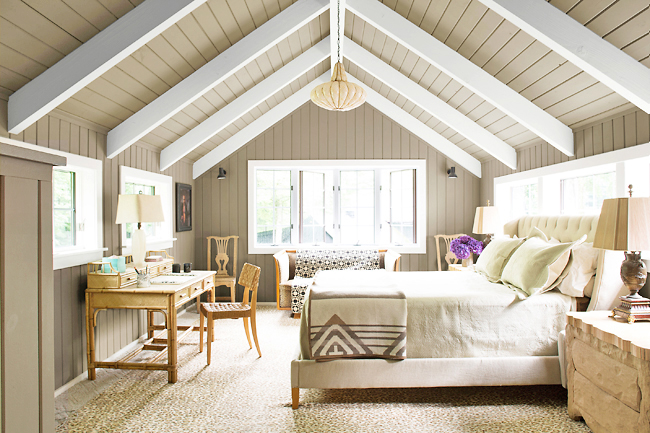 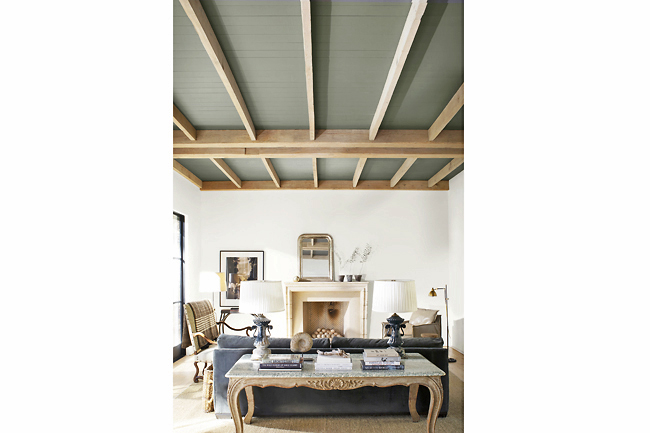 SOPHISTICATION ON A BUDGET
Although homeowners have many choices when it comes to adding interest to the ceiling, not all of them are equal.

Tray, coffered and beamed ceilings, for instance, change the feel of a room, but they come at a cost, said Associate Manager of Colour Marketing and Development at Benjamin Moore Arianna Cesa.

“Painting your ceiling is the most budget-friendly upgrade if you are looking to add a design element to your ceiling,” she said. “It can change the look and feel of a space.”

Unlike other ceiling treatments that cost more money and require a firm design commitment, it’s easy to change paint if you don’t like it, said designer Hannah Galbreath.

And if your budget does not allow for a professional, you can take the job on yourself.

MAXIMUM WARMTH
Smaller rooms, such as dens and offices, can benefit from deep, saturated ceiling colours, which can add subtle warmth, Cesa said.

“Darker paint colours can be comforting and cozy,” she added. “Bringing that colour onto the ceiling allows you to be completely enveloped in that hue.”

She advises saving this technique for rooms with plenty of light to avoid a “cavelike” feeling.

“If the room doesn’t have natural lighting, consider bringing in additional artificial lighting sources,” she said.

Hunnefeld Painting owner Jesse Hunnefeld added that painting a ceiling – particularly in a smaller room or one with an unusually shaped ceiling – is a good way to draw the room in.

A SENSE OF CONTINUITY
In rooms where there is no natural 90-degree line between walls and ceiling, painting the ceiling may be the best choice for a clean, crisp look, Hunnefeld said.

“You don’t have a natural break, visually, that you do when you have 90-degree perpendicular angles,” he said. “So you’d have to re-create that line, and re-creating that line is complicated in technique.”

Painting that line by hand, he said, can leave you with a less-polished look. Extending the colour up the wall to the ceiling mitigates this problem.

“In some homes, where you might have a bullnose wall, rather than creating an artificial line just continuing the paint doesn’t create visual truncation,” Galbreath said. “It allows you to continue your view upward.”

The room, she said, runs in a single visual plane, as opposed to in several disconnected planes that draw the eye back and forth.

CONTRASTING SHEENS
Even in a room where the ceiling is the same colour as the walls, you can create contrast with a paint’s sheen. Hunnefeld suggested using a semi-gloss or high-gloss paint on accent points, such as the trim, so the eye picks up different elements in the room.

“It’s a juxtaposition, and it can be very subtle,” he said. Or, Cesa said, lean into sheen in a different way by using it on the ceiling.

“If you want to heighten the drama and bring some more texture into the space, you can also opt for a ceiling in a higher gloss, which will mean greater shine and reflection,” she said.

But glossier sheens, she noted, can affect how a colour casts, and that’s worth keeping in mind. If you use a glossy sheen on the ceiling, consider painting your walls in the same finish, “to keep things simple and unified”, she suggested.

THE ILLUSION OF SPACE
Although one common fear of painting a ceiling with darker colours lies in closing a room in, the truth is that a deeply saturated ceiling can actually enlarge a space.

“It helps to blur the lines and edges of the space,” Cesa said. “It can make small rooms feel larger.”

Galbreath agreed. “It can sort of make the ceiling go away,” she said. When you use different colours, she said, you are accentuating the difference between wall and ceiling.

DO A TEST RUN
Painting your ceiling with colour is not without pitfalls, especially if you choose a highly stylised look.

Hunnefeld said a ceiling that is both pigmented and rich in sheen hides nothing, and slight imperfections in drywall are also more apt to leap to the surface. And if your ceiling has a textured finish, it’s best to stick with white paint.

“The flatter the surface, the less imperfections show,” Hunnefeld said, noting that one workaround is to reduce the sheen to flat or matte.

He added that colour is harder to touch up if the ceiling needs a little bit of work in the years to come.

If you decide that colour is the way to go, Galbreath said that testing is important. She suggested painting large samples next to one another, marked clearly.