NECOCLI, COLOMBIA (AFP) – Halfway on their perilous journey to the United States (US), news reaches a Haitian mother and son near the Colombian border with Panama that American officials are deporting their newly arrived compatriots by the thousands.

But Benedictine and Roberth Point Du Jour are undeterred by the disturbing images of Haitian border-crossers being detained on arrival in Texas from Mexico.

“My goal is to get there and they cannot stop me,” said the mother, 42, who began the journey with her son on August 6 from Chile, where many Haitians found refuge after a devastating earthquake in 2010.

With economies struggling from the fallout of the coronavirus epidemic and travel restrictions being lifted, many are now making their way north through Central America with dreams of a better life in the US.

The Point Du Jours find themselves stuck in the coastal town of Necocli in northwest Colombia with some 19,000 other undocumented migrants, mainly Haitians, trying to enter Panama. 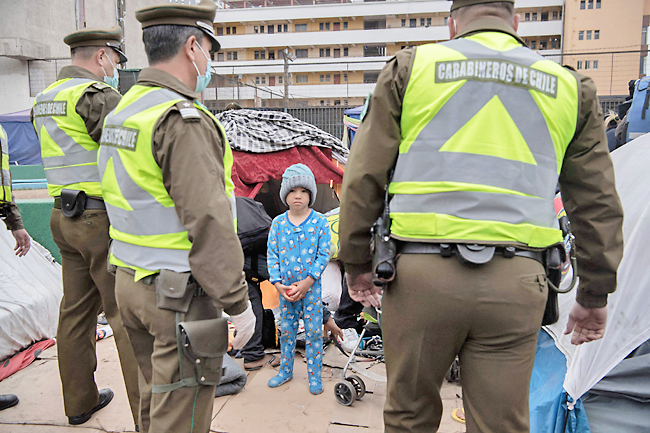 Some have been stranded here for weeks, waiting for seats on boats that cross the Gulf of Uraba to Acandi on the Panama border.

There are only 250 boat tickets available every day.

From Acandi, they will start on foot – and armed with machetes, lanterns and tents – the dangerous trek of at least five days to Panama through the Darien jungle, battling snakes, steep ravines, swollen rivers, tropical downpours and criminals often linked to drug trafficking.

In a recent report, Doctors Without Borders (known by its French acronym MSF) said criminal gangs in the jungle prey on migrants, and assaults and rapes are common.

Still in Necocli, Roberth Point Du Jour on Thursday recounted his biggest fear: drowning on the 60-kilometre journey across the gulf.

“The second (fear) is that they will deport me,” he said, “because the thing I want most is to make something of myself in life.”

The US government came in for much criticism over images of mounted border patrol officers wielding long leather reins and confronting a slew of migrants crossing the border from Mexico.

Many have been driven back, and some 1,400 others repatriated to Haiti on a series of flights.

“It’s a shame but my goal is… to get there, no matter what,” Benedictine insisted, stubbornly.

Waiting their turn, she and her son are renting accommodation in Necocli – a town of some 45,000 people – for USD10 a night.

Many other migrants have no choice but to camp on the beach.

“It’s too late to go back now,” said Frank, a 38-year-old Haitian who also made the trip from Chile and withholds his family name for fear of reprisals from authorities along the way.

Six countries still separate him from the US, where friends and family await.

Frank is travelling with five relatives including a baby of six months.

Under an agreement between the governments of Panama and Colombia, no more than 650 migrants are allowed to cross the border every day, contributing to the bottleneck.

Some 11,500 people have managed to buy tickets to make the boat trip to Acandi by October 13, and a further unknown number of people are trying to make the crossing on “illegal” vessels, according to Colombia’s human rights ombudsman Carlos Camargo.

All this despite US officials insisting in recent months that undocumented migrants will not be allowed entry.

“Do not come,” Vice President Kamala Harris said in June. “You will be turned back.”

Last year, a steady influx of migrants from Colombia northward dried up due to coronavirus travel restrictions and border closures.

But officials said there have been several thousand new arrivals at Necocli in recent weeks.

So far this year, an estimated 60,000 people have crossed the Colombia-Panama border – a key crossing for migrants fleeing poverty and violence in their home countries in search of a better life up north.

Many did not make it through the forest, according to their fellow travellers.

Those who make it to Panama, MSF said in a report last month, are generally held for processing and deportation.

Those with pending administrative or judicial processes – refugee applications, for example, or giving testimony against human traffickers – can be held at a migrant reception centre for weeks or months.

“The centres are a source of complaints, as those who are held there face inadequate food and shelter, a lack of clean water and showers, and no means to communicate with their families,” MSF said.