Let’s get all the patronising comparisons out of the way because Killers of a Certain Age, by Deanna Raybourn – about four women who’ve reached the mandatory retirement age for professional assassins – is so inventive, the only ageist wisecracks it deserves are the ones its characters make about themselves.

Perhaps, one can hope, condescension to senior sleuths and spies is fading out of fashion altogether, given the success of Richard Osman’s Thursday Murder Club series and the boomlet of mystery and suspense novels featuring older protagonists, including Ottessa Moshfegh’s Death in her Hands and the forthcoming Secret Lives by Mark de Castrique.

Raybourn’s story opens in 1979, with our four heroines on their first mission, posing as flight attendants on a private plane to carry out the execution of a Bulgarian bad guy and his henchman. They rely on hypodermic needles laden with poison and, when things go awry, their own highly trained bare hands and a knife. In flashback chapters, Raybourn (author of the Veronica Speedwell series) describes how the young women were recruited by a black ops organisation known only as “the Museum”, an offshoot of the OSS and its British counterpart, the Special Operations Executive (SOE). Qualifying for an all-female squad known as “Project Sphinx”, their job has been “to eliminate people who need killing”.

Rayburn’s narrative toggles between the quartet’s early exploits and the present, when their collective career is coming to a close. Now in their 60s, their lives have been marked by change and loss. Helen, whose “refined” beauty once drew comparisons to Jackie Kennedy, is a widow stuck in grief. Mary Alice is finding it harder to sustain her false cover stories to her beloved wife about her “work trips”. Natalie, once a flirty “gamine” finds that her allure stocks have fallen. Billie – our main character and part-time narrator – tries to tamp down regrets about all the years she let work take precedence over a private life. 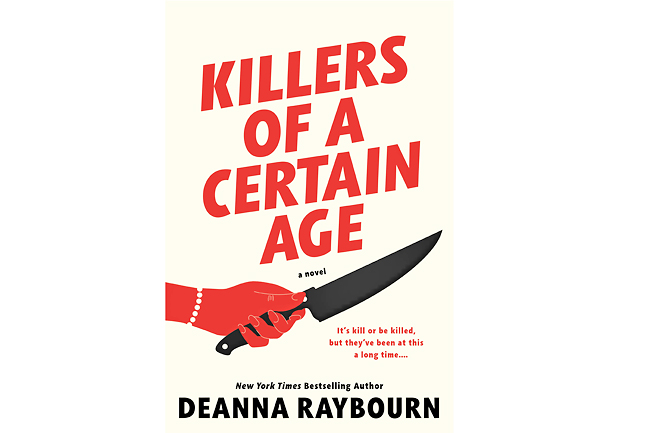 When the women receive an invitation for an all-expense-paid luxury cruise courtesy of the Museum to celebrate their retirement, they reluctantly gather aboard for enforced gaiety.

But Fate has something else in mind. Experiencing an intense bout of hot flashes (avoid eating spicy food!), Billie dives into an isolated walk-in fridge for relief. When she emerges, she spots a former colleague – an explosives expert named Brad – masquerading as a
crew member.

It doesn’t take long for the women to figure out the cruise is a ploy to gather them together to efficiently rub them out.

But why? Before they can solve that mystery and save their lives, the superannuated Sphinxes have to deal with the vicious Brad.

What ensues is an extended escape executed by this quartet of agents-gone-rogue to figure out who in the Museum has marked them for death. From a rubber dinghy adrift in the Caribbean to a safe house in New Orleans to the drafty English manor where the women’s training began decades earlier, the book sweeps through place and time.

Killers of a Certain Age is a singular suspense story thanks to its deftly fluctuating tone, which is by turns comical, violent and unexpectedly affecting.

When the women first assemble on that ill-fated cruise ship, they lament the abrupt termination of a career – however macabre – that gave their lives purpose:

“If I’d known the job in Qatar was my last, I would have paid more attention,” Helen said.

“I would have paid more attention to all of them. It’s gone so fast I’m going to miss the adrenaline,” Natalie says. “I mean, how else am I going to find anything that makes me feel that alive?”

Indeed, Billie concurs, “It’s like going from playing high-stakes poker to nickel slots for the rest of your life.”

Granted, the women are talking about their profession as black ops assassins, but it’s impossible not to root for these dangerous dames and their refusal to let themselves be put on the ash heap – a phrase that, in this thriller, should be taken literally.