The Thursday Murder Club is back in action

THE WASHINGTON POST – Two years ago, Richard Osman’s The Thursday Murder Club introduced four unlikely, yet immensely likeable, amateur detectives. Elizabeth, Joyce, Ibrahim, and Ron meet once a week in the Jigsaw Room of Coopers Chase, their plush English retirement village, to investigate unsolved crimes and identify those who got away with murder.

But when a local builder turns up dead, the 70-something sleuths find themselves grappling with their first live case – one with “a real corpse, and somewhere out there, a real killer”.

Osman’s debut novel was a publishing phenomenon: it sold millions and Steven Spielberg snapped up the film rights. It was also the first instalment in a series.

Last year, Osman, a British television presenter, delivered a sequel. The Man Who Died Twice picked up where its predecessor left off and proved to be another skillfully constructed and brilliantly entertaining tale packed with intrigue, humour and adventure.

Now comes The Bullet That Missed, Osman’s third novel in as many years. “It’s been quiet for a few weeks,” he wrote at the start of it, “but Ron is delighted that the gang are back in action.” So too is the reader. 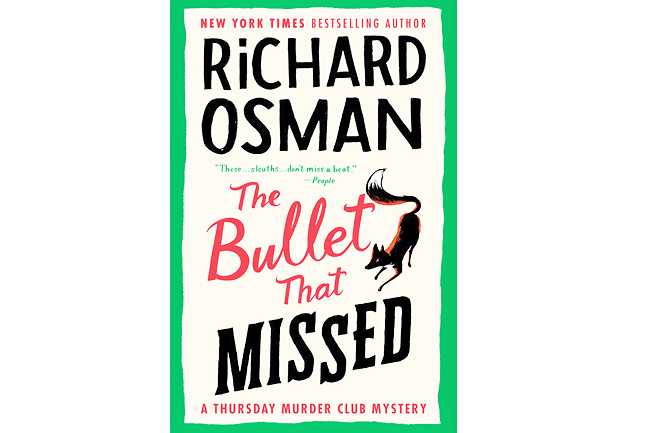 On this outing, the “four harmless pensioners” turn their attention to the case of Bethany Waites, a television reporter who, one night 10 years ago, while investigating a massive tax fraud operation, was in a car that went over a cliff.

Her blood and clothes were found in the wreckage; she was missing, presumed dead. Such unsolved crimes come with unanswered questions. Who did Bethany visit that fateful night?

What new evidence had she unearthed? Who was the passenger in her car? And most important of all, what happened to her body?

Determined to get to the bottom of the mystery, the members of the Thursday Murder Club start to ingratiate themselves with key players in the case. Ibrahim visits drug dealer Connie Johnson in prison to ask a favour – a tall order since he and his friends were responsible for putting her there. Ron reaches out to longtime master criminal Jack Mason, who in old age has become a lonely soul after learning the hard way that “your henchmen are not real friends”. And Elizabeth and Joyce track down Fiona Clemence, who filled Bethany’s shoes after her death. “Ever so ambitious,” remarks Joyce, “but they only use ‘ambitious’ as a criticism about women, don’t they?”

Osman wove another strand in and around his main narrative. Ex-spy Elizabeth receives menacing anonymous texts. She is then kidnapped by “the Viking” and tasked with killing Viktor Illyich, a man once nicknamed ‘The Bullet’ by his fellow KGB agents. If Elizabeth doesn’t carry out her mission in two weeks, then Joyce dies. Meanwhile, the number one suspect in the Bethany Waites case has a fatal encounter with a pair of knitting needles.

Suddenly the stakes are raised, and the rules are changed. Can the Club solve two murders, and will Elizabeth commit one?

But unlike most crime novelists, he ensures his book’s strength and momentum stem not from its plot or its thrills but rather its perfectly formed characters.

Once again, the quartet of friends makes for delightful company. No-nonsense, go-getting Elizabeth leads the way armed with tradecraft gleaned from her previous secret life and her trusty handbag, “A gun, a pen, some lipstick and a crossword book. Just like the good old days.” Her wing-woman, retired nurse Joyce, brims with positive energy. Psychiatrist Ibrahim has a keen mind, a good ear and a sharp suit. And former trades union official Ron continues to fight doggedly for justice – or at least as much as his bad knee will allow.

If there is fault to be found it is a recurring one throughout the series – namely that Osman’s two men have less to do than his two women, and as a result feel like extras around the main double-act. But what a double-act. The women’s exchanges are studded with witty repartee and reveal Elizabeth to be queen of the dry reply: Joyce asks her if she has ever been on TV; “I was once in a hostage video,” answers Elizabeth. Joyce’s lively, gossipy diary extracts elicit more smiles. However, every now and then Osman offsets the frivolity with pathos, not least when Elizabeth watches her husband Stephen slide further into the dark depths of dementia.

Osman’s novels have been classified as “cozy crime”. They deal with murder most foul but are neither grisly nor gritty. They are not hardboiled but soft-centred. On this occasion, love is in the air for several characters. Some of the gang meditate on the indignities of growing old, others on the value of friendship. What could have been twee and uninvolving is in fact heartwarming and enthralling. “They carried a kind of magic, the four of them,” a policeman muses. That magic is still there in abundance.