The tale of a drop-out who found purpose in books, travel and just living

THE WASHINGTON POST – As a reviewer, I read everything slowly, trying to live up to Henry James’s dictum: Be one on whom nothing is lost. And yet, occasionally, a book comes along that seems to reflect enough of my own life that I find myself wishing I could simply invite its author out for coffee and a long chat about old times.

This was, in part, my reaction to James Campbell’s Just Go Down to the Road: A Memoir of Trouble and Travel, which takes its main title from a favourite aunt’s hitchhiking advice.

Throughout, I kept pausing over parallels with aspects of my own youth in the 1960s and ‘70s, even though I grew up in Ohio, not Scotland. That self-identification certainly lent the book a supplementary charm for me, as it will for anyone who came of age in those years.

Other readers will just enjoy the memoir for what it is: an engrossing account of a young man discovering what he wants to do with his life.

This ultimately turned out to be working as one of London’s most admired and versatile literary journalists. For many years, Campbell appeared each week in the Times Literary Supplement, where his back-page essay – ironic, bookish and irresistibly entertaining – was every subscriber’s favorite feature. (I should add that as an editor he also commissioned a score of pieces from me.) His own books include This is the Beat Generation, Exiled in Paris: Richard Wright, James Baldwin, Samuel Beckett, and Others on the Left Bank, Talking at the Gates: A Life of James Baldwin, Gate Fever: Voices from a Prison and Invisible Country: A Journey Through Scotland. He has also edited The Picador Book of Blues and Jazz. 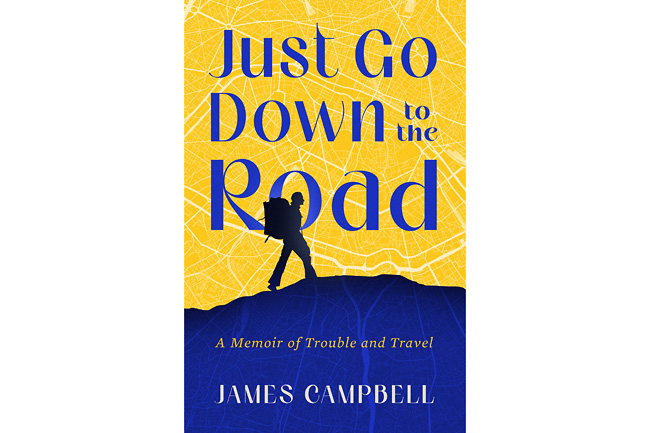 Just by themselves, those titles hint at a key fact about Campbell: He’s not the product of an upper-class English education or the scion of a landed family of ancient privilege. Born in 1951, he grew up in Glasgow, dropped out of school at age 15, worked three years for a printing company where he operated a machine that inscribed lines on sheets of paper, took up the guitar because he loved Robert Johnson’s Mississippi blues, and regularly hung out at pubs with fiddlers and squeezebox players, hippies and druggies. By the time he was in his mid-20s – when this memoir essentially ends – Campbell will also have hitchhiked through much of Europe, joined an Israeli kibbutz, spent time in North Africa and even managed, in the 1970s, to enter and then graduate from the University of Edinburgh, where he edited its literary magazine. For one particularly stellar issue, he enticed James Baldwin to contribute an essay on jazz, which eventually led to friendship with the great Black writer.

Just Go Down to the Road opens with this grabber sentence: “I was fourteen when I was caught stealing books the first time.” Campbell hated classrooms and authority, longed to be the “master of my own time” and was constantly “doggin’ it,” that is, going truant. To avoid scenes at home, he took to altering his report cards – an abysmal math grade of eight per cent could be easily transformed into a slightly less abysmal 38 per cent. But then one day, after Campbell had finally quit school, a friend gave him a copy of William Golding’s Lord of the Flies and his life began to change directions:

“The important thing about this first mature reading experience was my understanding that a story can be about something other than… the realistic events recounted on the surface.”

Moreover, “the story that wasn’t really there, or not visibly… could turn out to be the more important one. Incidents that are described could be ‘symbolic’… It was up to the reader to be an active participant. Reader and book were in a relationship.”

By his late teens, Campbell was devouring John Steinbeck’s novels, Jack Kerouac’s On the Road, the works of Graham Greene and Albert Camus, even Jean Cocteau. He found them all “enriching” and, as he inevitably came to realise, “cultural wealth is a rare thing among investments: it is foolproof. It never decreases in value and it never lets you down.”

After resigning his printing apprenticeship, the restless, long-haired Campbell moved to London, where he was soon washing dishes in a cafe. “The Turkish Cypriot manager wondered why the Scottish boy was in London and asked a question which pleased me as much as any compliment: ‘Police looking for you?’ He paid me GBP9 a week, cash.” Before long, though, Campbell took off for India, hitchhiking his way to the home of spiritual enlightenment – until, that is, he reached Istanbul, where he was swindled out of his small savings. Rather than return home, the young Scot lucked into a job guiding tourists around the Greek island of Spetses, which, slightly fictionalised, had served as the setting for The Magus, the tricksy, postmodernist classic by John Fowles (whom Campbell would later interview). His boss there insisted on just two things: “Don’t touch Greek girls” and “Don’t forget to feed the horses”.

Throughout these reminiscences, Campbell offers vivid portraits of fellow wanderers and seekers, including an incognito Peter Green, legendary guitarist and founder of Fleetwood Mac: “He had a sharpness of wit, and a strong intelligence without the interference of intellectualism.” Later, after a disillusioning encounter with Alexander Trocchi, author of the heroin-infused Cain’s Book, Campbell recognises how deeply he values reading, art and the acquisition of knowledge. He starts drafting a novel and gradually discovers his own down-to-earth style: “It was a Scottish style: common-sensical, sceptical, impatient of cant, alert to the value of subterranean humour.”

In the last chapter of Just Go Down to the Road this onetime autodidact – by then holding a university degree in modern American literature – has just begun to review for the New Statesman and, in 1980, contributes his first piece to the Times Literary Supplement. Many others would follow. Perhaps – libel laws permitting – Campbell will one day tell us more about his subsequent life at the heart of the London literary whirl.