THE WASHINGTON POST – For most of us, the phrase “home economics” probably conjures up images of postwar high school classes designed to launch young women into their marital lives, fully armed with sewing and souffle-making skills. But home economics has a much more complicated and at times surprising past. In The Secret History of Home Economics: How Trailblazing Women Harnessed the Power of Home and Changed the Way We Live, journalist Danielle Dreilinger uncovers the complex history beyond the stereotypes of “stirring and stitching”.

Dreilinger’s lively account offers a thorough look at a profession that allowed women to participate in public life even as they were barred from most jobs and areas of study. Throughout the field’s history, there was a consistent tension between those who sought to elevate home economics to a serious, scientific level and others who dismissed it as mere women’s work.

After the Civil War, women trickling into co-ed land grant and historically Black colleges could study “domestic science”, which taught the homesteading skills necessary for survival in agricultural areas. At some universities, it provided a way for women to study science. Ellen Richards, one of the discipline’s founders, managed to gain status as a “special student” at MIT studying chemistry in the 1870s.

After graduating, she set out on “her life’s work: to improve the home, and thus society, through science”. The power of science could be harnessed to promote healthy living through nutrition but also to educate intelligent consumers. As corporations ramped up mass production in the 1920s, women with home economics degrees pursued careers in business, in consumer-focused industries ranging from food production to department stores.

The field was renamed “home economics” in 1899, connecting it to economics and suggesting serious consideration of the purpose of domestic spaces now that “the Industrial Revolution had permanently eliminated the home as a site of economic production”. Many of the profession’s early theorists thought that home economics should be linked to progressive social causes. Early home economists were consumer activists, who sought to “protect working-class and poor urbanites from unscrupulous merchants selling shoddy fabric and clothes, bacteria-ridden meat from dirty slaughterhouses, and flour whitened
with lead”. 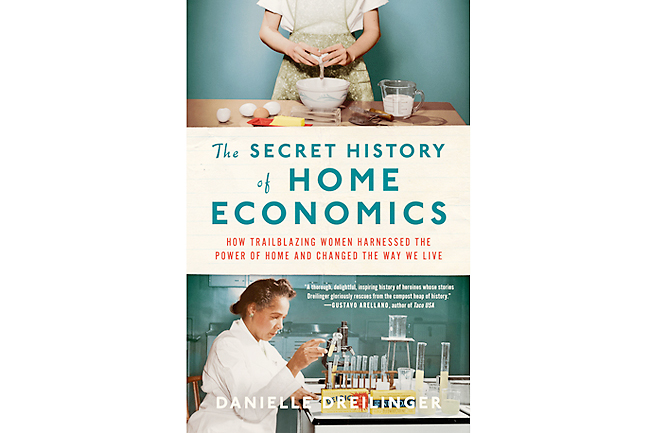 Home economics demonstrated its usefulness to the American war effort in both world wars, with specialists employed by the federal government to work in food conservation and to organise the production of uniforms and surgical supplies for the military. Eleanor Roosevelt added further significance to the profession by singling out the work of home economists for celebration and inspiration as “an education in democracy”.

Dreilinger paid considerable attention to the contributions that African American women have made to home economics, even as they were kept out of mainstream White organisations well into the 1960s. As early as the 1890s, educators such as Margaret Murray Washington, the third wife of Tuskegee Institute founder Booker T Washington, developed domestic science as a means of “educating moral leaders who would lift up their communities”. Another prominent African American leader Flemmie Kittrell, who received a PhD in nutrition from Cornell University in the 1930s and taught at Howard University, was sent by the State Department to Liberia to study malnutrition and spent the 1940s and ‘50s travelling and consulting in other countries of the developing world.

During the Cold War, home economics was a tool in the United States’ anti-communist arsenal, a way to export “free-market abundance and Western-style democracy across the globe, to transform geopolitics by modernising the home”. Yet the field had its regressive side back home: School administrators throughout the country often shunted girls of colour into home economics to better prepare them for careers as domestic workers or, in the case of Chicana girls in California, as “maids, teenage mothers, laundry workers and factory seamstresses”.

By the 1950s, the battle for the soul of the profession was beginning to tilt in favour of those who insisted that its purpose was to educate women for marriage. Home economics was officially defined by the American Home Economics Association (AHEA) as “the field of knowledge and service primarily concerned with strengthening family life”. Surveys from the era show that the majority of home economics majors planned to become homemakers, while women who wanted to study other subjects were no longer restricted from the sciences. These associations with home and hearth virtually guaranteed that the field would be a target of the feminist movement in the 1970s. Even as the AHEA endorsed the Equal Rights Amendment and tried to rehabilitate its image by insisting on its relevance to modern life, young women with career ambitions began to pull away from the profession.

We can thank home economics for a number of taken-for-granted features of contemporary life, from the Head Start preschool programme to school lunches and freeze-dried mixes for prepared foods (a byproduct of home economists’ research into the best astronaut fare). Dreilinger finds that today, the field may even be experiencing a small resurgence, with greater participation from men. Partly revamped as the teaching of life skills, mandatory home economics in schools, she argued, could help reduce the gender gap that still finds women responsible for the bulk of household chores. Adhering to that old progressive strain, Dreilinger pointed out that home economics “is, can and should be an interdisciplinary, ecological field that explores the connections between our homes and the world with an eye to addressing the root causes of problems such as hunger, homelessness, isolation, and environmental devastation”.

This is a lofty task, to be sure, but one that would not be out of sync with home economics’ often surprisingly progressive past.