The speedy workout you can do anywhere

THE WASHINGTON POST – Stuck for time or space to exercise? A newly published study may have the workout for you.

Start by lifting your knees up one at a time, like a prancing marionette. Then squat, hop, lunge and perform burpees for five minutes of calisthenics, with a few minutes of walking in between. You’ll get about as much exercise as if you had run hard on a treadmill at the gym, but without leaving your living room or work cubicle.

The study is one of the first to look into whether a quick bodyweight workout “can be called high-intensity exercise”, said doctoral candidate at the University of New Mexico in Albuquerque who led the new study Gabriella Bellissimo.

The study suggests the answer is yes. The results show you can get an effective aerobic and strength workout at home, or wherever you happen to be, in less time than you might take for a coffee break.

There’s one caveat: You must perform the exercises – or simplified variations of them – with sufficient enthusiasm and vigour. Do each exercise vigorously for one minute, then walk or otherwise move gently in place for a minute. 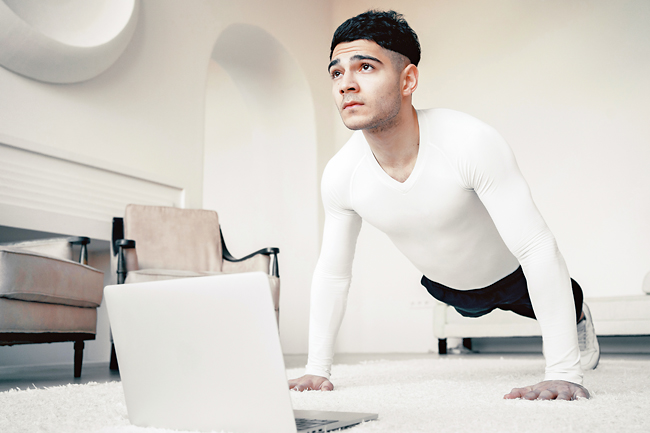 To find out if this bodyweight workout of five exercises was as effective as running at the gym, Bellissimo and her colleagues rounded up 12 healthy, active men and women in their 20s or early 30s. On one day, they asked them to sprint through a typical version of intervals, running on a treadmill at top speed for one minute, then walking for another minute. The participants repeated this run/walk interval five times, rested for two minutes, and then did the entire workout again. Each round of exercise took 11 minutes.

On another day, the exercise shifted to the five common moves designed to tax the lower body. The volunteers bopped and lunged through as many of each exercise as they could complete in one minute, stepped in place for a minute, then headed on to the next exercise. After resting for two minutes at the end, they repeated the routine.

During both workouts, the scientists monitored people’s heart rates, oxygen consumption and feelings about how hard the exertion felt.

Afterward, they asked how much people enjoyed each workout and checked in the following days on muscle soreness.

The result? Both workouts raised people’s heart rates and oxygen consumption substantially, meaning they both constituted effective, aerobic exercise. There were slight differences. The treadmill sprints required more oxygen, suggesting they might stress the cardiovascular system and build endurance marginally more than the bodyweight exercises.

That workout, on the other hand caused greater soreness, indicating it demanded more of people’s muscles, probably resulting, over time, in larger gains in leg strength. The volunteers also said the bodyweight routine felt more strenuous, although it lasted for the same few minutes as the running.

In HIIT exercise, a brief spurt of strenuous exertion alternates with rest. Scientists already knew treadmill intervals count as HIIT. This study helps establish that calisthenics at home or a quiet corner of the office or your favourite park deliver intense exercise, too.

This study was quite small and only measured the effects of a single instance of each of the workouts, said professor of kinesiology at McMaster University in Hamilton, Canada, Martin Gibala.

Even so, “there is value in conducting studies like this”, he said. “It’s important to characterise the physiological responses” during and after various workouts, to reassure people who may be tempted to squat-jump and scissor-kick that their exertions will have the desired effects.

If you would like to try bodyweight HIIT, Bellissimo said, feel free to tweak or totally rejigger the study’s workout to suit your fitness and circumstances. Do the full set of exercises only once, instead of twice, for instance. Slow down during any of the exercises.

Or, if you feel capable and hypercompetitive, beat the study participants’ high-knees average, which was 185 per minute. Add in the burpee push-up, unused in this study, if you want upper-body exercise, or use a chair to make the burpees or squats less taxing.

“Try to finish each interval, however you can,” said Bellissimo, who is studying a dialed-down version of bodyweight HIIT with older people who have health concerns. They are tolerating the exercise well so far, she said. “The beauty of intervals is that they are intense, yes, but then, they’re done.”