The show must go on

“We are under a very abnormal situation,” Sheta told AFP at the camp’s Freedom Theatre.

The streets were silent that December day as residents called a public strike to protest Israeli forces killing a 16-year-old Palestinian girl in Jenin hours earlier.

With Israeli forces raiding Jenin repeatedly in recent months, engaging in gunfights with Palestinian militants, the Freedom Theatre’s ability to provide residents with respite is under growing strain.

In 2011, the theatre’s well-known Israeli-Palestinian director Juliano Mer-Khamis was gunned down in Jenin’s refugee camp, in an attack that remains unsolved.

“It’s not like you have a clear plan in your schedule… you need to prepare for different scenarios,” said Sheta, 42.

Ahead of the opening night of the theatre’s latest production Metro Gaza, the creatives woke up to find three Palestinians had been killed in an Israeli operation. 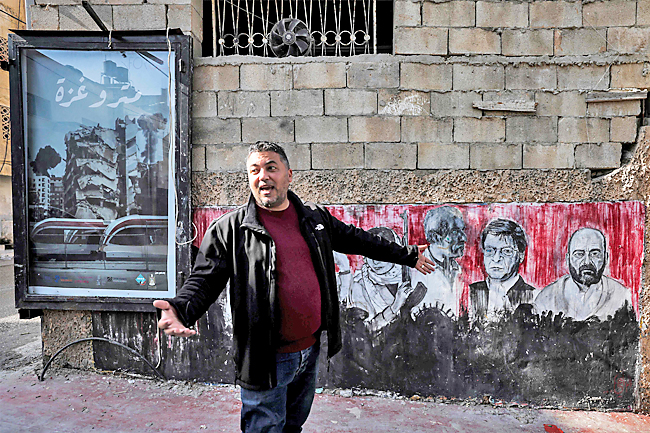 “What can we do? Can we continue, or stop, cancel the show?” asked Sheta.

The actors took to the stage as planned and an audience of around 75 filled half the stalls.

Yasmin Shalaldeh, 30, a Jerusalemite who plays a Gazan girl in the show, said it was “essential to keep on working”, particularly in Jenin.

Over 40 Palestinians were killed last year during Israeli operations in the Jenin area, including militants, children, and a teenager involved in the theatre’s youth programme who was shot dead in November.

Each playhouse faces its own challenges and Jerusalem’s El-Hakawati, also known as the Palestinian National Theatre, has seen its audiences dwindle since Israel began constructing a barrier around the West Bank in the early 2000s.

“After the wall and the checkpoints, (it) started to get less and less, people cannot come,” said director Amer Khalil, as the sound of children enjoying a puppet show drifted into the room.

Whether living in Jerusalem, the West Bank, Israel or the blockaded Gaza Strip, Palestinians hold different papers which impact the ability of theatre casts and audiences to travel.

“It’s torture,” said Shalaldeh. “When you have a play in Jerusalem and you send it to someone from Gaza and they want to come, they can’t.”

Long gone are the days when directors must submit their script to Israeli censors, yet the theatre is “threatened by other things”, said Khalil.

Decorated with posters of past productions, El-Hakawati’s foyer bustles with Jerusalemites ahead of each new performance.

But the director described a “very, very, very difficult – critical – economic situation”, with ticket sales not even covering a third of running costs.

El-Hakawati cannot receive any support from the Palestinian Authority, which is banned by Israel from operating in Jerusalem, leaving it to “live on donations” largely from European states, said Khalil.

“Like the whole world, you have a national theatre and… the running costs – electricity, water, taxes – are paid by the government or by the municipality. And this is what we don’t have here,” he said.

For Al Saraya, a theatre in the coastal city of Jaffa that receives state funding from Israel, such support is far from unconditional.

Mahmoud Abu Arisheh, its 34-year-old director, said the theatre’s mission is to celebrate “the richness and uniqueness of the Arab culture”.

In November, then finance minister Avigdor Lieberman called on authorities to take “all the available measures, including denying funding” when Al Saraya screened Farha, a film depicting alleged Israeli atrocities against Palestinians.

Abu Arisheh said threats and incitements against the theatre “are already limiting our freedom of speech and expression”.

And sanctions by Israeli authorities “could happen at any time”, the director warns.

But Palestinian artists, whether in Jaffa, Jenin or Jerusalem, must keep the show going, said actor Shalaldeh.

“Even with all of this situation… and the cruelty in the world, it is important to keep on living – and delivering art to people.”