The show must go on

KYIV, UKRAINE (AFP) – One of Ukraine’s most storied ballet companies embarks this week on a run of shows in Paris, a welcome break from airstrikes and blackouts that have bedevilled performances back home.

The production of the classic Giselle being brought to the French capital by the Kyiv-based National Opera Ballet of Ukraine caps a period of intense hardship for the company.

Since Russia’s invasion in February, the usual stress of rehearsals has been compounded by fleeing dancers and performances interrupted by air raids.

One dancer has even been killed after volunteering to fight.

But the show must go on and performers and audiences alike have been forced to adapt.

Prima ballerina Natalia Matsak recalled how one loud siren during a performance several months ago forced a hasty intermission as everyone rushed for cover.

“We went out to bow and the curtain fell immediately. We didn’t even have time to bow properly,” she told AFP.

Aerial assaults have become a regular feature of life in Kyiv – missile attacks on Friday left swathes of the city without power, water and heat amid sub-zero temperatures. 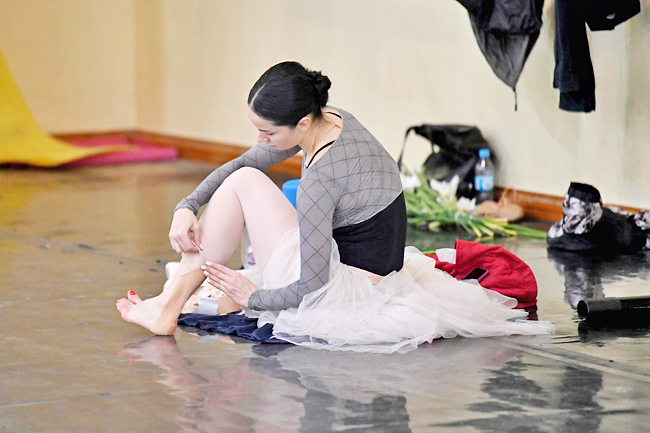 Every time a raid occurs, the audience at the National Opera – a Neo-Renaissance landmark near the famed Golden Gate – also has to take refuge in the bomb shelters.

Dancers join the audience members in the shelters, but face having to remain limber for breaks that can last more than an hour.

“After all, as soon as the alarm is lifted, we must be ready to continue the performance,” Matsak said.

“This is very exhausting… a serious test of strength for artists.”

But, she added, the pressure doesn’t let up once everyone goes home.

“After such shelling, we do not sleep at night. We are nervously exhausted.”

The company suffered a mass exodus of dancers when the war began and millions of Ukrainians fled their homes.

“A lot of women left the troupe. The changes in the composition of the troupe are colossal,” said leading soloist Sergiy Kryvokon.

Male dancer Oleksandr Shapoval volunteered to go to the front the day after the invasion, leaving behind two teenage daughters.

He died in mortar shelling in September in the eastern industrial Donbas region.

But these days, dancers are returning as they miss their homes and work, Kryvokon said.

In Paris, he will perform the part of Prince Albrecht alongside Matsak in the titular role.

The tour at the Theatre des Champs-Elysees involves 17 performances over 16 days.

The theatre’s website describes the tragic love story as “one of the great classical ballets of their repertoire”.

Both Kryvokon and Matsak have performed the ballet with other partners but it will be their first time doing the piece together.

“We’ve been working on this performance for less than two weeks,” Kryvokon said, beads of sweat visible on his forehead after an intense rehearsal.

In past years, the National Opera Ballet of Ukraine – which is in the middle of its 155th season – has toured France with Tchaikovsky’s festive season favourite The Nutcracker.

But the current wartime climate makes such a selection impossible.

“Tchaikovsky is a symbol of the enemy, so neither the Nutcracker nor his other ballets are danced by our theatre,” said the company’s administrative head Sergiy Skuz.

On the other side too, ballet has not escaped the impact of the conflict.

The celebrated Bolshoi Ballet Academy has seen expatriate dancers leave, while its tours in the West have been cancelled in protest of the invasion.

The Bolshoi, in turn, has scrapped performances by directors who have denounced the war.

The Ukrainian dancers are eager instead to promote Giselle by French composer Adolphe Adam.

It is a “respected world classic” that has appeared “on our stage for many decades”, Kryvokon said.

The dancers are also keen to show that, despite the many trials of the past year, they can still deliver a first-rate performance.

“Every trip abroad is of great importance for us now,” Kryvokon said.

“We have to be on top there, and we will show the level with pleasure.”