ISLA DE MARGARITA, VENEZUELA (AFP) – Shuttled between tourist spots, posing for pictures on beautiful beaches, and dancing awkwardly to merengue: Russian tourists have found a friendly holiday destination on a Venezuelan island far from the motherland and its war with Ukraine.

Isla de Margarita is a tropical gem with white-sand shores and turquoise waters.

However, years of political and economic turmoil in Venezuela have frightened off most tourists, with Western nations sternly warning citizens not to travel there.

For thousands of Russians seeking sun-soaked holidays, but faced with visa and flight restrictions over the Ukraine war, it is a match made in Caribbean heaven.

Out of a group of Russian tourists on a recent guided tour of the island, she is the only one willing to say anything about the brutal conflict in which Ukrainians are under constant Russian attack and enduring freezing temperatures, many without water or electricity, thousands of miles away. 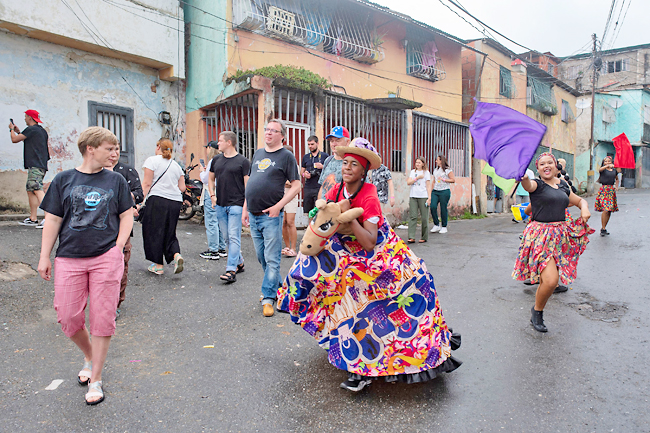 “A war is by far the worst thing,” she said briefly.

Some fear repercussions if they speak out, while others support President Vladimir Putin’s war efforts.

In the past two months, some 3,000 Russian tourists have taken advantage of a new direct flight between Moscow and Isla de Margarita with Russia’s Norwind Airlines.

The route re-opened on October 2 after a seven-month interruption due to the war and was modified to avoid flying over air spaces restricted by sanctions.

A 14-hour flight from Moscow, Isla de Margarita is also seen as an affordable option. Tourist Sergei Katch said he paid USD3,500 for a 12-day package to the island.

A sign reading “welcome” in Russian greets the tourists at the island’s international airport. Everything is organised, from island tours to Russian translation services.

The travellers don’t leave their hotel without a guide.

Dolgova said she decided to travel to Venezuela after ruling out Egypt, which she had already visited twice, and where she said the treatment of Russians has changed since the start of the war.

President Nicolas Maduro sees tourism as a secret weapon to revitalise an economy showing timid signs of recovery after years of hyperinflation and a currency in free fall.

He has signed a deal with Russia, a strong ally, to receive some 100,000 tourists by December 31.

This surge in tourism has had a direct impact on the island’s economy, said the president of the Chamber of Tourism for the Nueva Esparta state Viviana Vethencourt which covers Isla de Margarita and two other islands.

She said there are no statistics, but improvements are slowly showing.

For saleswoman Nacarid, who sells jewellery and beachwear, “things sell, but not like before” when the island bustled with visitors from Europe and the United States.

“They are hagglers,” she complained, as one of the Russian tourists convinces her to halve the price of an item.

Dimitri Bobkov, 31, a university professor, tries to dance to the sound of merengue booming from the radio as the tour group stops at a gas station. He visited the tomb of socialist icon Hugo Chavez and played football with children in a slum.

“Here, I like the people, the food, the nature, the climate,” said Bobkov.

“I will probably remember this for the rest of my life.”