PRAHOVO (AP) – The worst drought in Europe in decades hasn’t only scorched farmland and hampered river traffic, it also has exposed a part of almost forgotten World War II history: the hulks of dozens of World War II German battleships have emerged from the Danube River as its water levels have dropped.

In the middle of the mighty river separating Serbia and Romania near the Serbian port of Prahovo, a rusty hull, a broken mast where the swastika flag used to fly, an upper deck where a command bridge used to be, a barrel that could have been holding fuel – or even explosive materials – lean on a pebblestone dune that has emerged from the water.

The ships, some still laden with munition, belonged to WWII Germany’s Black Sea fleet that was deliberately sunk by the Germans as they retreated from Romania as Soviet forces advanced.

Historians say up to 200 German warships were scuttled in September 1944 near Prahovo in the Danube gorge known as The Iron Gate on the orders of the fleet’s commander as they came under heavy fire from the Soviets. The idea behind the deliberate sinking was to at least slow down the Soviet advance in the Balkans. But it didn’t help as Germany surrendered months later, in May 1945.

The unusually hot weather across Europe this summer was linked by scientists to global warming and other factors. The dropping water levels created dangerous conditions for shipping on many rivers on the continent, including the Danube, Europe’s second-longest river that flows through 10 nations. Authorities in Serbia have used dredging to keep vessels moving. 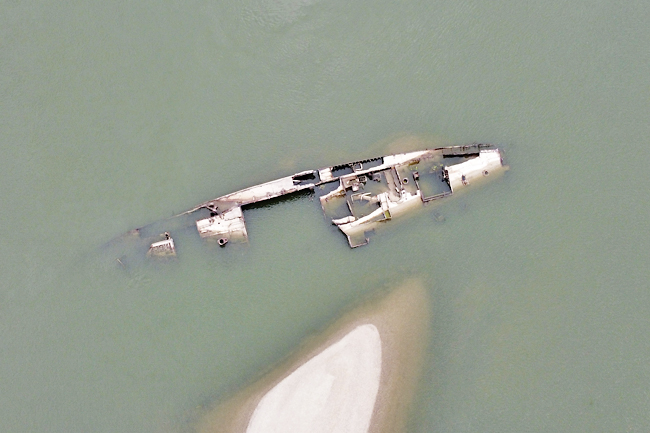 The wrecks appearing from the depths are an impressive sight, but they have caused decades of trouble for those using the river, and now the Serbian government, with European Union (EU) support, is planning to do something about them.

Some of the wrecks were removed from the river by the Communist Yugoslav authorities right after the war. But most of them remained, hampering shipping, especially in summer when water levels are low.

For years there were plans to take the ships out of the muddy waters, but the operation was considered too risky because of the explosives they carried and there were no funds to do it until recently.

Now, the EU and the European Investment Bank have agreed to provide loans and grants to finance the operation to remove some of the vessels near Prahovo to improve the traffic capacity of the Danube. The total cost of the operation is estimated at EUR30 million (USD30 million), of which about 16 million are grants.

“These vessels have been sunk and they have been lying on the river bed ever since,” the EU Ambassador to Serbia Emanuele Giaufret said during a recent trip to the wreckage site.

“And this is a problem. It’s a problem for the traffic on the Danube, it restricts the capacity to move, it’s a hazard because certain vessels still contain unexploded ordnance.”

Accompanying Giaufret was head of the European Investment Bank in the Western Balkans Alessandro Bragonzi. He said the project consists of the removal of 21 sunken vessels.

“It has been estimated that more vessels are underwater, up to 40, but those that are currently impeding the fairway conditions of the Danube, especially during periods of low water level, are 21,” Bragonzi said.

Experts say the salvage operation will consist of removing the explosive materials from the sunken vessels and then destroying the wrecks, rather than dragging the ships out of the river.