The mixed legacy of the Pentagon Papers: Secrets, leaks and prosecutions

THE WASHINGTON POST – At the height of the Revolutionary War, before the United States’ (US) Constitution had even been drafted, 10 American sailors sent a petition to maritime authorities revealing that the first commander in chief of the US Navy had tortured British prisoners of war.

The Continental Congress dismissed the Navy chief, who filed a libel suit against the men. Two were imprisoned. Congress granted them relief once more, then passed the first US laws safeguarding the rights of whistleblowers. Whistleblowers could be compensated and protected from retaliation.

“America’s public servants were obligated, Congress maintained, to report wrongdoing in their ranks whenever they encountered it,” Middlebury College professor Allison Stanger writes in an essay in the new book National Security, Leaks and Freedom of the Press: The Pentagon Papers Fifty Years On.

The Pentagon Papers: The very name evokes a noble brawl over the public interest. Nixon. Watergate. The truth-tellers prevail. Government censors are banned from the land. Yet another Oscar nomination for Meryl Streep.

The 1971 Supreme Court decision in New York Times Co v United States (and the affiliated cases involving The Washington Post and others) remains a rallying cry for journalists and for those in favour of checking excess in governmental secrecy.

The legacy of the episode, as captured in this magisterial volume of essays, edited by Columbia University President Lee C Bollinger and University of Chicago law professor Geoffrey R Stone is hazier.

Each is an eminent First Amendment legal scholar, well-versed in the tensions between national security and public accountability.

The briefest of recaps: The military analyst Daniel Ellsberg had participated in the compilation of a secret history of the Vietnam War for Defense Secretary Robert McNamara. The study revealed how successive American leaders had lied repeatedly to the US public about the conflict in Vietnam and the prospects for US success. 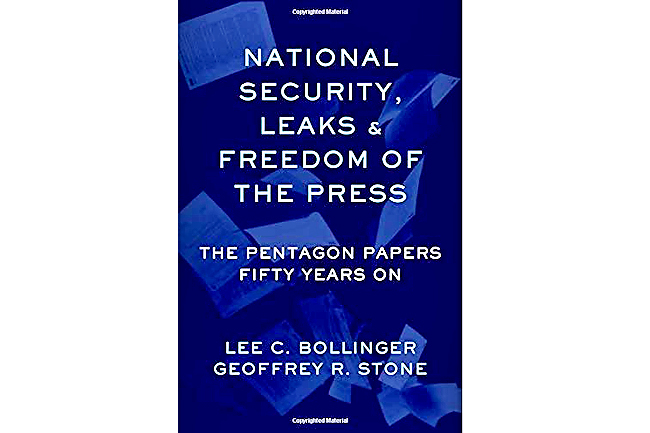 More than 58,000 Americans perished, as did millions of North and South Vietnamese troops and civilians. Ellsberg recognised how damning the history was and thought the public should know.

He believed that the lies tore apart this nation. As President Richard Nixon continued the war, Ellsberg decided to leak the papers to the press – starting with Neil Sheehan of the Times.

The Supreme Court upheld the right of the Times, The Post and others to publish these classified secrets, despite the government’s warnings of grave harm and efforts to prevent their publication.

By a vote of six to three, the Supreme Court ruled against the Nixon administration’s effort to impose “prior restraint” – the term for blocking the publication of something rather than seeking consequences after going to press.

The justices proved, however, to be architects of ambiguity.

The Supreme Court’s fractured consensus – there were six written opinions in the case – did not actually prohibit prior restraint; it just concluded that the government had failed to meet the high bar required to exercise it.

The court also did not prevent the Nixon Justice Department from seeking to prosecute the Times, The Post, and their controlling owners, Arthur Sulzberger and Katharine Graham, under the Espionage Act for disclosing secrets that might aid foreign powers.

While the Times won a Pulitzer Prize for public service, no protection was afforded the whistleblower of the affair. Ellsberg had knowingly, frantically and frenziedly photocopied thousands of highly classified pages to share with the public. He faced a dozen federal
felony charges.

They were thrown out only because Nixon’s men had so badly trampled Ellsberg’s constitutional rights as they sought to thwart the papers’ release.

Those efforts to plug the leaks – the president’s men were known as the “plumbers” – set the stage for Watergate and the unraveling of the Nixon administration.

In the decades since, there was a fragile understanding. Journalists would not enjoy specific legal protections, exactly, but they also wouldn’t be prosecuted for leaks.

But that balance has been undermined by trends on multiple fronts: the government’s heightened push to expand the boundaries of what information to keep secret; the capacity of leakers to acquire and share information anonymously; the ease of outlets in posting documents and stories immediately; and the dexterity of the government in hunting down reporters and their sources.

In the two decades since the September 2001 terrorist attacks, the US government has engaged in “an orgy of unwarranted, often dangerous overclassification of information,” in Judith Miller’s memorable term in her contribution to Bollinger and Stone’s book. (Yes, that Judy Miller. The former Times reporter spent more than 80 days in jail for refusing to testify to a grand jury about the identity of a source. That source, Vice President Dick Cheney’s chief of staff, Lewis “Scooter” Libby, was sentenced to 30 months in prison on charges related to lying to the leak inquiry, but President George W Bush commuted his sentence before he started to serve it.)

Secret after secret accumulated, not least about weapons of mass destruction, the American torture of enemy combatants, drone attacks, surveillance of US citizens on American soil. Indeed, the classifications have seemingly mounted geometrically.

As Harvard law professor Jack Goldsmith writes in the book: “It is intolerable that the government would have the final say on what secrets to disclose. That is the ultimate evil to be avoided.”

Yet the reason many of those secrets transformed into scandals is that leaks dragged them into light. A single contractor working on national security matters can now siphon trillions of bytes of data onto a single thumb drive relatively quickly.

It’s enough to strike fear into any responsible government official. Goldsmith, who fought the secret expansion of executive power as a top Justice Department official under Bush, argues that the press has gotten the upper hand in recent years.

I’m not sure that’s right. The same technology that enables the National Security Agency (NSA) to monitor people domestically without ever actually eavesdropping can readily help identify reporters’ sources without reading a text or listening to a phone conversation. The Justice Department under Presidents Bush and Barack Obama bore down on reporters James Risen (then of the Times) and James Rosen (then of Fox News). Obama’s Justice Department initiated more prosecutions of leakers under the century-old Espionage Act than officials did under all his predecessors combined.

Manning was convicted and sent to jail for providing information to WikiLeaks. (Obama commuted her sentence shortly before leaving office.) Snowden is in exile in Russia, even though Obama’s first attorney general, Eric Holder Jr, said he probably provided a public service by exposing some NSA excesses in the vast troves of highly classified material he gave to The Post and the Guardian. Reality Winner’s smaller leak to the Intercept ended in a prison sentence of more than five years, said to be the longest ever meted out in a federal court for violation of the Espionage Act in leaking to the media. (She was transferred to a halfway house this month.)

In some ways, it’s remarkable that there have not been more leaks.

Through the decades, some questions endure. Why are leakers often treated with contempt and subjected to legal repercussions, when the reporters who rely on them are heralded as heroes? Why target leaks by low-level government workers for prosecution when journalists allow so many high-ranking Washington officials to send out trial balloons, love notes and poison darts under the cloak of anonymity?

Bollinger and Stone call upon the insights of prominent figures to define the parameters of the debate and forge a conclusion. Two former CIA chiefs (John Brennan and Michael Morell), a former attorney general (Holder) and the current director of national intelligence (Avril Haines) are represented in this volume along with distinguished law professors, civil-liberties activists and journalists.

The book valuably illuminates the issues, history and context in play but at times proves repetitious, as writers frequently survey overlapping terrain.

Even among observers from clashing vantage points, areas of consensus emerge. Pretty much all the contributors acknowledge that federal officials simply put too much material off limits through classification.

Morell, for example, argues for prosecuting leakers but would allow a public-interest claim as a mitigating circumstance. I think that should be an affirmative legal defense. Journalism is not espionage.

And as I learned from this volume, whistleblowing has been a hallmark of American accountability since the revolutionary era.

Journalists often seek to treat sensitive material responsibly. The Washington Post’s Ellen Nakashima writes persuasively of the care the paper took in handling the Snowden revelations. (Times national security reporter Scott Shane wrote a similar essay, titled The Designated Redactor about handling material from WikiLeaks for a book I edited a decade ago.)

The problem, as government officials note, is the nihilism of some non-journalistic actors, notably WikiLeaks’ own Julian Assange, in posting material without scruple, potentially jeopardising people’s lives. And yet as Shane and others have argued, the current prosecution of Assange makes the prosecution of journalists under the same laws ever more likely. (A British judge has rejected extradition; the US government has appealed.)

Many of the proposed reforms largely feel like tinkering around the edges. A truly muscular effort at declassification and meaningful limits on government secrecy would be welcome.

They would also require a radical re-imagining of past practices.

At the end of the book, Bollinger and Stone convene an unofficial commission. Its approach proves measured and drained of drama, as it seeks common ground among actors from varied and opposing viewpoints.

It sensibly argues that the Espionage Act should be revised to protect journalists from prosecution for publishing secret material when they are otherwise acting lawfully, and that federal employees should have the right to challenge the classification of information anonymously.

The “commission” also envisions that dissenters must go through official channels to register objections, though those channels would be reformed. It’s a callback to earlier arguments from former government officials.

“Even Ellsberg could have accomplished his goal by providing the Pentagon Papers to Congress rather than the media,” Morell writes.

Ellsberg concluded otherwise. As Ben Bradlee Jr recently wrote in the New Yorker, Ellsberg met secretly with antiwar Senator William Fulbright of Arkansas, then chairman of the Senate Foreign Relations Committee. Fulbright “dithered for months” about releasing the documents; Ellsberg turned to Senator George McGovern of South Dakota, a leading liberal who ultimately decided against getting involved, citing his intention to run against Nixon in 1972.