THE WASHINGTON POST – Books on artificial intelligence (AI) fall into two broad categories: the explanatory and the exclamatory. Either they describe the science behind the magical new technology, or they trumpet the way it will change our lives forever. But few take the time to introduce us to the surprisingly small group of colourful characters who created this transformational field.

This is what Cade Metz’s Genius Makers: The Mavericks Who Brought AI to Google, Facebook, and the World sets out to do.

It’s not entirely clear who the genius makers referred to in the title are: the researchers, or the corporate behemoths financing their work, or the AI systems themselves. But the book weaves together all three. In the process, Metz manages to touch on many of the salient controversies swirling around AI without getting bogged down by taking sides. Readers will come away with a clear understanding of how we got to where we are today.

Carving a narrative out of a complex and ever-changing cast of characters, even over the limited period that AI has been around, necessarily involves casualties. People are left out, and contributions are overlooked. But this will bother only those who know the broad outlines of the story already. For everyone else, Genius Makers puts meat on the bones of AI and illuminates many of the most important faces. For those who know the names, the book is filled with enlightening anecdotes that add texture and drama to the story.

Genius Makers opens with Geoffrey Hinton, the Brit turned Canadian who is widely recognised as having played the most critical role in developing deep learning, the branch of AI that is changing the world today. He, more than anyone else, is why “artificial intelligence” has entered our daily lexicon. Hinton is the archetypal academic, tousled, lost in thought, with a wry wit and healthy disrespect for authority. His most striking characteristic is that, because of an old back injury, he almost never sits down. 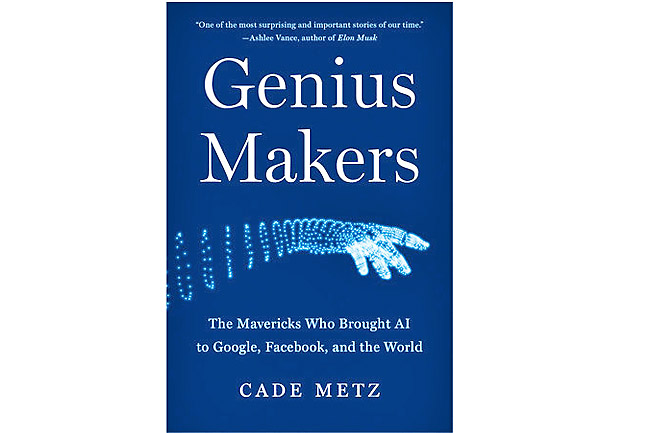 Metz tells the story of how this unlikely entrepreneur, travelling supine in buses and trains, engineered a bidding war for a company that had no product or employees and was finally sold to Google for USD44 million. That entertaining tale sets the tone for the rest of the book and explains some of its omissions, for this is a story not only about scientists but about the corporate scramble to harness their minds. A seminal figure like Yoshua Bengio, whose work led to advancements in machine translation and won him a share of the 2018 Turing Award, known as the Nobel Prize of computing, plays a peripheral role, for example, because he has remained independent while his fellow Turing Award winners Hinton and Yann LeCun, who went to Facebook, take centre stage.

Among the corporate players, Google is the dominant one, having gotten into the game through Hinton ahead of its rivals Facebook, Microsoft and the Chinese Internet search giant, Baidu. Besides Hinton, Google snatched up Demis Hassabis, a chess prodigy who went on to co-found the company whose AI system beat the world champion player of Go. Metz, who has covered AI for Wired magazine and now the New York Times, was in Korea for that world-shaking event and recounts it with engaging flair, noting that it triggered the race between the United States (US) and China for global dominance in AI.

Metz was in China for a follow-up match with the country’s national Go champion and gives a wonderful inside look at that event, which garnered far less international attention, in part because the Chinese government blacked out coverage. Eric Schmidt, Google’s chairman at the time, was there, intending to help his company reenter the Chinese market as an AI powerhouse after withdrawing years earlier over censorship and privacy concerns. It turns out, China didn’t need Google’s help. Metz quotes Schmidt later saying that he “did not understand at the time how totally effective” Chinese AI efforts were. Schmidt went on to co-chair the National Security Commission on Artificial Intelligence, whose mission is to advance US AI defence capabilities ahead of China’s.

Genius Makers takes something of a dogleg into the debate over the future of AI, particularly the likelihood of machines surpassing human-level intelligence. This is because several of the main protagonists – Hassabis and his colleagues, in particular – claim superhuman AI as their stated goal. But the debate is personified in the book by Elon Musk and Mark Zuckerberg, neither of whom are AI researchers, with Musk sounding the alarm while Zuckerberg dismisses those fears as Chicken Little hysterics. The more fearful side of the debate has captured the popular imagination and done a disservice to the field as a whole. While intelligent machines may beat humans in many domains, as they already have in game play, the possibility of AI systems developing self-awareness and free will is still the stuff of way-out science fiction.

Metz remains neutral on the debate, but he points out that it doesn’t take self-awareness and free will for AI to wreak havoc. Bias in data sets has already skewed AI decision-making in harmful ways, and Metz foreshadows the growing and potentially dangerous power of AI to fool human perception.

But Genius Makers does an admirable job of staying out of the algorithmic weeds or drifting into hyperbole, the twin sins of most books on AI. Metz tells a story that touches all of our lives today. While there will be many people who will feel left out, the book’s strength is in its portrayals of the personalities behind the science and of the serendipity of scientific discovery.