NEW DELHI (AP) — The government order on the night of March 24, 2020, was abrupt but clear: In four hours, India and its 1.4 billion people would be locked down entirely because of the coronavirus.

As the clock struck midnight, the world’s second-most populous country came to a screeching halt, isolating everyone in their homes.

In the days that followed, millions lost their jobs, devastating the economy. The already-struggling healthcare system was strained even further. Social inequalities came to the fore, pushing millions more into poverty.

India’s lockdown, among the strictest anywhere, lasted for 68 days, and some form of it remained in force for months before it eventually was lifted. Since the pandemic began, India has had 11.6 million cases and more than 160,000 people have died.

A year after the lockdown, its ripples are still visible. Some people shrugged it off and managed to get back to normal. For many others, though, their lives were changed greatly.

First, Neelesh Deepak watched his food dwindle. Then the actor couldn’t pay the rent on his New Delhi apartment. Out of money, he returned to his parents’ home in Madhubani, a village in eastern Bihar state. There, he tried to cope with his isolation from work, colleagues and friends. 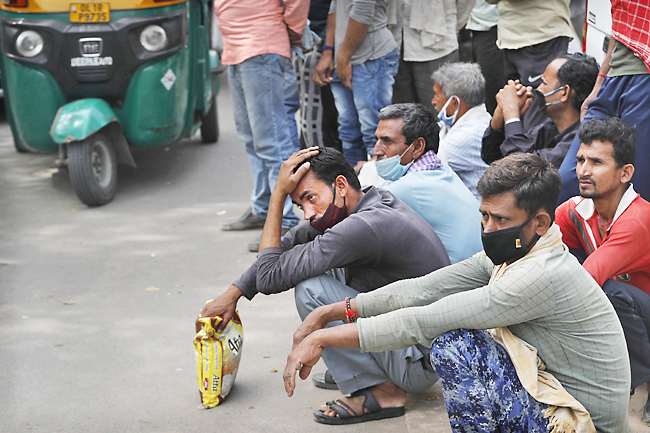 When he returned to the Indian capital in October, things had changed for the worse. Most theatres were closed, and those that tried to stage plays struggled to lure the public back. Shows were suspended indefinitely and thousands of coworkers had no jobs.

Without work amid the pandemic, the 40-year-old soon began to experience anxiety. When a friend took her own life, Deepak began seeing a psychiatrist, who prescribed medication.

He began to reckon with the heartbreaking realisation that he faced a painful struggle to make a living outside of the theatre.

That continued for months until he joined a non-profit group as a researcher. His income plummeted from between USD500 to USD600 a month to a little more than USD150. He struggles just to buy food. “My family is barely surviving,” he said. “The fear of the lockdown hasn’t left me. I don’t think it will leave me anytime soon.”

When 50-year-old Nirbhay Yadav and his 25-year-old son suddenly found themselves without work because of the lockdown, they became part of the biggest migration in India’s modern history: 10 million people began leaving the big cities for the countryside.

Fearing starvation, Yadav and his son left New Delhi for Banda, a village in central Uttar Pradesh state. They walked for 600 kilometres in the scorching sun along highways in an exhausting, harrowing journey.

When they finally reached Banda with blistered feet, villagers didn’t allow them to enter because of fears of catching the virus. The father and son were forced into a 14-day quarantine.

But many who fled the cities didn’t make it — with some killed in accidents and others dying of exhaustion, dehydration or hunger.

Over the next few months, the lockdown hollowed out Yadav’s entire savings, forcing him to delay the weddings of his two daughters he had planned for years. It left him heartbroken. Local non-profit groups provided some food but that soon ran out.

The state government announced it would provide the equivalent of USD13.80 per
month to every family of migrant workers for half a year, but Yadav never received it. After 11 months, he returned to New Delhi, where things were no better. Now he cannot find work even for one day. He is eating less and sleeps under a highway overpass.

“I have never seen something like this before,” he said. “I think I will never come back to this city.”

Still, the 30-year-old healthcare worker got infected, as did her husband, parents and in-laws. Only her four-year-old son avoided it. But that’s because she kept herself from seeing him in person for many weeks.

“I couldn’t even feed my son during those months,” she said. “It pained me.”

She thought of quitting her job, believing she was neglecting her parental duties. But she stayed at it, even as others in her family kept their distance from her. While doctors and nurses were cheered as heroes during the lockdown, people avoided her, fearing infection.

She tested thousands of sick and gasping people at hospitals, not knowing if she was adequately protected.

“That fear changes you as a person. You start valuing your life more,” she said. “Those early days still scare me.”