THE WASHINGTON POST – Over the course of three novels, Melanie Finn has taken readers to settings as far-flung as picturesque Swiss towns and rural Tanzania. In her fourth, The Hare, Finn mostly traps us in an uninsulated, mice-infested cabin in Northern Vermont. This is not a cheery book, but like those Vermont woods in winter, it shimmers with a stark loveliness.

Rosie Monroe, an orphan raised by a cold grandmother, gets a scholarship to study design in New York, and there meets Bennett – seductive, mysterious and 20 years her senior. Bennett sweeps her into his life as the scion of a rich Connecticut family. In the early chapters, The Hare seems to be “a cautionary fairy tale” about how a smart but naive young woman finds herself manipulated and mistreated by a man who is a thief, a drug dealer, maybe even a murderer: “Rosie felt a truce between the fierce, bright moments of love she had for Bennett and the doubts that crouched in certain dusty corners – where he went, what he did, the source of his money. She suspected he wasn’t doing what he said he was.”

Not long after Bennett takes Rosie and their infant daughter, Miranda, to that awful cabin, he deserts her to be closer to a perhaps-imaginary “teaching job”. Rosie, quiet and self-effacing, is forced to learn the way of the woods from her next-door neighbour, Billy (whose full name is Willamina) – a tough, gruff woman with six howling hounds. Billy teaches Rosie (now known as Rose) to stack wood, forage for edibles and shoot a buck, eventually freeing her from the submission that is women’s lot.

As Finn states it: “Women do what needs to be done… they do what is expected, the obligation of their gender. For centuries, for thousands of years, tens of thousands, millions of years… Women had holes and men believed it was their right to fill them. Not content with the physical holes, they tried to make existential ones. Drilling, drilling, drilling.” 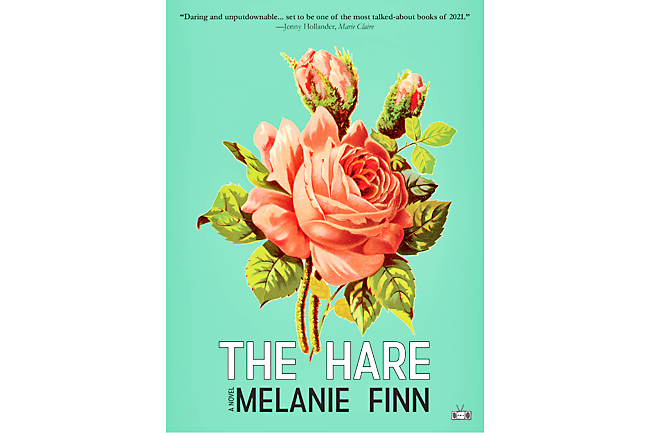 Part of the novel’s strength lies in its passionate portrait of Vermont. Rose views both the grandeurs and the terrors of the rural woods with an artist’s senses.

“Mud is its own season in Vermont… The smell of mud is the earth’s own and oldest smell, the first smell the first olfactory sensor ever detected. Mud is the smell of earth time. Rosie sat on the back porch and inhaled.” On her rare trips out of her narrow orbit, our heroine marvels at how the rich live – as compared to her life of scrimping, always moments away from fiscal doom, where a major purchase is a new blouse on sale at JC Penney’s with its “merciless prison break lighting.”

As well as painting a portrait of income inequality, Finn burnishes her credentials as an environmentalist. Finn, who was born in Kenya, wrote the script for the nature documentary The Crimson Wing: Mystery of the Flamingos and is highly alert to animal suffering.

Countless creatures are harmed in the telling of this story, including a shot and mangled moose and the titular hare. There’s a particularly damning portrait of a chicken farm’s cruelty. “They had minds,” Rose muses about the chickens, “they had awareness of themselves as individuals. This was the worst of it. They did not aspire, they did not know that other chickens had better lives, they did not know green fields existed or the sunny farmyards of children’s books”. It’s enough to turn any reader into a vegan, though Rose herself is proud to be able to dress a killed deer in an hour and a half.

In following her from her girlhood through middle age, Finn thrusts Rose in the path of practically every hot-button feminist issue: childhood sexual abuse, an abortion crisis, hot flashes and #MeToo.

By the time a serial killer is on the loose, the novel has metamorphosed into a gritty, fast-paced thriller. For some readers, the novel’s last third may contain a plot twist (and brutal death) or two too many.