The gruelling road ahead

LONDON (AP) – The cannons have sounded, the bells have rung and the mourners have paid their respects.

Now King Charles III faces the task of preserving a 1,000-year-old monarchy that his mother nurtured for seven decades but that faces an uncertain future. The challenge is immense.

Personal affection for the queen meant that the monarchy’s role in British society was rarely debated in recent years. But now that she’s gone, the royal family faces questions about whether it is still relevant in a modern, multicultural nation that looks very different than it did when Elizabeth ascended the throne in 1952.

Amid a global re-examination of the history of colonialism and slavery that has seen protesters tear down or deface statues in British cities and universities like Oxford and Cambridge change their course offerings, an institution that was once the symbol of the British Empire is likely to face renewed scrutiny.

Charles will try to “maintain continuity” while also signalling that the royals are prepared to change, said professor of history of modern monarchy at City University London Anna Whitelock. But he faces a raft of questions. 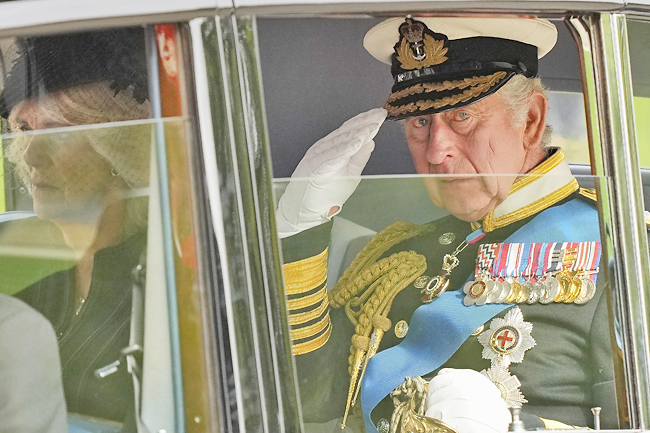 “What place does a monarchy have in a multi-faith, multi-ethnic society?” Whitelock asked.

“And is it the right rallying point for the nation? And should it be the monarch representing the United Kingdom (UK) abroad? What does it say about us? Is it a bastion of tradition that people should applaud? Or is it actually a check on progress that actually doesn’t represent the inclusive, diverse society that people would hope that Britain would now become?”

And there is another, more personal, question lurking in the background: Is a 73-year-old white man the best person to confront those issues?

Charles waited longer than any other heir to take the throne and in many ways embodies the modernisation of the monarchy.

He was the first monarch not educated at home, the first to earn a university degree and the first to grow up in the ever-intensifying glare of the media as deference to royalty faded.

He has been lauded as an early advocate of the environmental movement and won praise for working to improve the lives of young people in underprivileged communities.

But he also has a reputation, perhaps undeserved, as a somewhat stuffy older man who is more at home on the polo field or one of his country estates than the soccer-mad cities of modern Britain.

Charles also alienated many people with his messy divorce from the much-loved Princess Diana, and by straining the rules that bar royals from intervening in public affairs, wading into debates on issues such as environmental protection and architectural preservation.

As the UK mourned his mother, it quickly became clear that Charles was ready to be a more personal monarch.

He has made a point of wading into the crowds of well wishers, stopping to shake hands and exchange a few words, more like a United States (US) presidential candidate appealing for votes than a king who inherited the crown from a line of ancestors stretching back to 1066.

One woman even kissed him – a level of familiarity no one would have dared with Elizabeth.

A proud Briton whose roots stretch back to the Windrush generation of immigrants who came to the UK from the Caribbean after World War II, Leon was at Westminster Abbey to represent the St Lucian community in honouring the queen. Now he expects Charles to take the monarchy in a new direction.

“The king is actually going to change, perhaps modernise the monarchy in the image that he thinks in the current day,” Leon said, his British Empire Medal pinned to his chest.

In addition to being king of the UK, Charles is head of state for 14 “realms” that retained the monarch as their sovereign after gaining independence from the former British Empire.

It is in these far-flung nations, which stretch from Australia and New Zealand to the Caribbean that Charles may face his first challenges.

The pressures were clear earlier this year when Prince William and his wife, Kate, faced calls for a royal apology and reparations for slavery during a trip to Belize, Jamaica and the Bahamas to celebrate the queen’s 70 years on the throne.

During that visit, Jamaican Prime Minister Andrew Holness told the royals that his country was “moving on,” a few months after Barbados severed its ties with the monarchy.

The royals have also faced criticism from within after Prince Harry and his wife, Meghan, gave up royal duties and moved to California.

In a widely publicised interview with US television host Oprah Winfrey earlier this year, the couple alleged that palace had been insensitive toward Meghan, who is bi-racial, and that a member of the royal family had asked about the colour of their first child’s skin before he was born.

Charles sought to address the tensions at home and abroad in his first address as king.

“Wherever you may live in the United Kingdom, or in the realms and territories across the world, and whatever may be your background or beliefs, I shall endeavour to serve you with loyalty, respect and love, as I have throughout my life,” he said.

Charles also confronted concerns about how he would conduct himself as king.

The laws and traditions that govern Britain’s constitutional monarchy dictate that the sovereign must stay out of partisan politics, but Charles has spent much of his adult life speaking out on issues that are important to him, particularly the environment.

His words have caused friction with politicians and business leaders who accused the then-Prince of Wales of meddling in issues on which he should have remained silent.

The question is whether Charles will follow his mother’s example and muffle his personal opinions now that he is king, or use his new platform to reach a broader audience.

“My life will, of course, change as I take up my new responsibilities,” Charles said. “It will no longer be possible for me to give so much of my time and energies to the charities and issues for which I care so deeply. But I know this important work will go on in the trusted hands of others.”

The king has been clear that he intends to slim down the monarchy, limiting the number of working royals and reducing the expense of supporting them.

But for 10 days, Britain spared no expense as it honoured Elizabeth, who became a comforting symbol of stability over the tumultuous years of her long reign.

All the spectacle that has become synonymous with the royals was on display as uniformed members of the royal family walked solemnly behind a gun carriage carrying the queen’s coffin away from Buckingham Palace, cannons and church bells sounded in lament and world leaders filled Westminster Abbey for her funeral.

But it was pageantry with a purpose, celebrating the queen’s life while also reminding the public of the monarchy’s role in public life and linking the people to the royal family in their time of shared grief.

“People often criticise the British monarchy or even laugh at it as pomp and circumstance and emptiness,” said historian Robert Lacey, author of Majesty: Elizabeth II and the House of Windsor.

“Well, an occasion like this shows it’s not emptiness, that the pomp and circumstance stands for something.”