The future of farming

LAS VEGAS (AFP) – Armed with a smartphone in today’s ever more connected world, farmers can remotely monitor the health of their fields or the level of feed in their silos.

Both start-ups and agro-industry giants are exhibiting such cutting-edge tools – tools to help farmers collect and analyse data and improve decision-making – at the huge Consumer Electronics Show (CES) in Las Vegas, which closes on Sunday.

Thus, Olivier Lepine, who heads the French start-up Brad, has developed a sensor that can provide real-time information on temperature, moisture and light falling in a farm field.

With such data in hand, farmers can make more accurate decisions on when to irrigate, how to reduce pesticide use, and how to treat their soil – while saving time normally spent travelling from field to field.

Farmers, and especially younger ones, “want to have an impact, but they also want to have a quality of life”, Lepine said.

South Korean start-up AimbeLab meantime is offering a way to monitor the contents of the huge silos where grains and feed are stored.

Farmers often “simply use a hammer to bang onto the silos to check the sound – which is still very inaccurate – to see how much they have left”, said Sein Kwon. 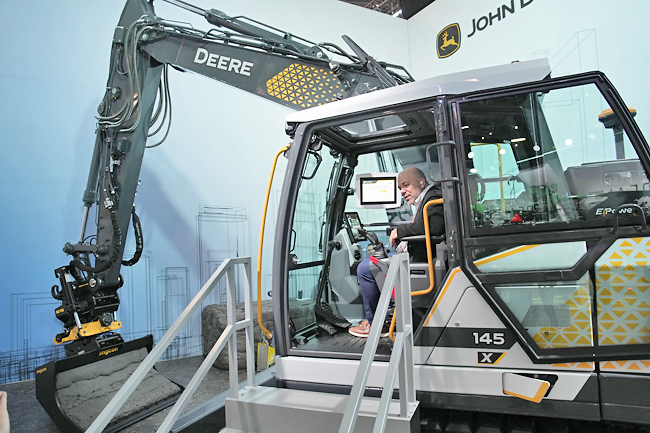 AimbeLab’s probe not only assesses the amount of grain in a silo but also its condition, allowing both the farmer and his suppliers to better anticipate deliveries and thus reduce trips.

And Meropy, a French company, is exhibiting a sort of alien-looking wheel – with long spokes extending on either side – that can roll through a field and use its cameras to photograph crops from all angles, detecting the presence of weeds, pests or disease. The “two main drivers to adoption of new technologies”, said Horticulture Professor at Texas A&M University Amit Dhingra are “the need, like when a disease appears, and the quest for the most cost-efficient ways”.

David Friedberg, who heads The Production Board, a California investment firm specialising in agricultural technology, put it simply: Farmers need to produce “more calories per acre with less inputs” – like pesticides – through genomics, digitisation and data analysis.

John Deere, the giant farm-equipment maker famous for its green tractors, is also working on this. The huge, 36-metre booms on its newest sprayer-tractors have cameras every few feet and very fast processors that, even as the vehicle rumbles along at 20 kilometre-per-hour (kph), can detect weeds and spray only where needed.

“Instead of having to spray 100 per cent of the field, we spray only about a third of the field and we save on chemicals,” said Deere’s head of automation Jorge Heraud.

The group has also developed an ‘Operations Centre’ available on computer or smartphone that allows farmers, thanks to data collected by multiple sensors on tractors, to monitor real-time information on their location, engine performance and so on.

They can also review how seed trials are progressing or find where weeds are proliferating.

“The farmer can look at the map and understand what part of the field he needs to manage differently,” said the product’s designer Lane Arthur.

“He’s going to save some money but he’s also going to help the environment.”

As in other industries, said Head of Innovation for the International Fresh Produce Association (IFPA) Vonnie Estes, “farmers are starting to digitise their work”.

Combined with increasing automation, data analysis can help solve problems of labour shortages – by knowing where workers are on a farm – of food waste in the supply chain or of greenhouse gas emissions.

“It’s not seamless,” said Estes, noting that broadband connections are not always available, or reliable, in the countryside.

Another challenge, she said, is that a flood of technical data can be overwhelming.

“Everyone is talking about 5G,” Estes said, but “a lot of farmers would be happy with 3G”.