SAN MARTIN, PERU (AP) – Rolando Zumba, a gentle 59-year-old, wept, though the moment he described took place many years ago. Nothing has been the same since that day, when a park ranger took away his hunting rifles. Now where there was once self-sufficiency, hunger has stalked his village.

Zumba’s story has its roots in the 2001 creation of Peru’s Cordillera Azul National Park, a stretch of Peruvian Amazon rainforest in the foothills of the Andes. His story is linked to faraway oil giants Shell and TotalEnergies, who bought carbon credits from the park.

One day while hunting within the park, Zumba said his rifles were seized by armed guards who worked for CIMA, the Spanish acronym for a non-profit set up to protect the national park. When the park was established, Kichwa tribe members like Zumba lost unfettered access to what an Associated Press (AP) investigation has found was almost certainly their ancestral land.

In 2013, a disease destroyed his cacao plantation and to this day, it is still not yet rebuild due to economic restraints. Meanwhile, just 2.4 kilometres away, millions of dollars in oil money flows into the former tribal territory. Revenues, which Zumba said have not benefitted the Kichwa tribe.

“Look at the conditions we live in,” said Zumba’s neighbour Segundo Panduro, 77. The authorities “just bring words”, he said. “You can’t live off words.” 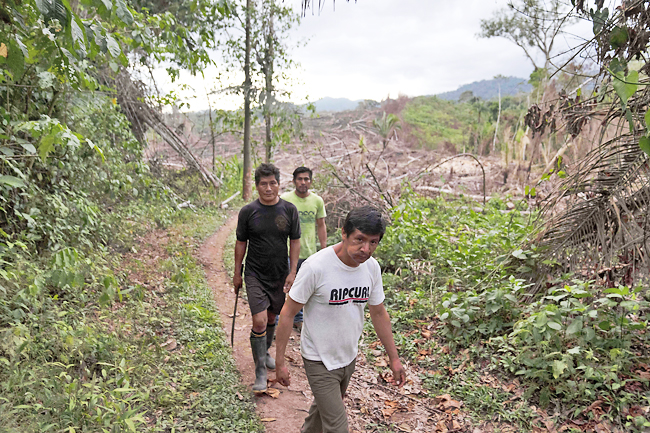 Many major polluters pay tropical countries to keep rainforests standing. The trees absorb carbon and buyers get carbon credits that are supposed to cancel out their emissions, helping them meet climate commitments. But industry standards require consent from local communities, who are supposed to benefit.

The Peruvian government and CIMA argued that consent wasn’t required because the park was never owned by the Kichwa tribe. To evaluate the tribe’s claims, an AP team journeyed hundreds of kilometres over mud roads and by boat to seven Kichwa villages.

The investigation found evidence that supports the tribe’s claims and that the people there survived through means of hunting and cultivation. In Puerto Franco, a faded sign announced the village and a date – August 1970. A document from 1996 shows a teacher was sent to Puerto Franco that year. At the border of the park, an elder recognised fragments of old pottery on the ground as the kind his grandparents used to make.

A record of community meetings in 1991 found in Callanayacu village, detailed concern over young troublemakers and a lost farm animal. An entry in the diaries of Chambira community described 1996 as the “year of 6,000 tourists”. Satellite images from before the park was created show rainforest clearings for all the villages in almost identical shapes as today.

In each village visited, people older than 40 shared memories of hunting and gathering food in what became the park in 2001. They spoke about the waterfalls, hot springs and a mountain shaped like a lion’s back. Others recalled their ancestors planting fruits inside what is now the park.

All insisted that they weren’t consulted about the park or the offsets. Chambira’s chief, Nixon Vasquez, said people initially thought the carbon project was a coal mine. A diary in Allima Sachayuc village documented how a CIMA delegation visited in 2005 to “let them know the history of the creation” of the park.

In response, Peru’s national parks authority said that anthropologists helped establish the park. A Kichwa community group attended a meeting to discuss it in 2001 but raised no concerns.

Executive Director of CIMA, Gonzalo Varilla, said that the park’s formation complied with national and international human rights law. According to him, the Kichwa villages have no rights to the park and many Kichwa communities have received benefits from the park income. Sustainable enterprises were funded in four villages and schools were improved in two.

A TotalEnergies spokesperson said that there was “constructive dialogue” between the Kichwas and the Peruvian authorities. A Shell spokesperson said responsibility lay with CIMA, but the project was independently verified.

A human rights law professor at King’s College London, Satvinder Juss, reviewed the Kichwa tribe’s testimony and said that the Peruvian government had fundamentally violated the ILO Convention and a United Nations declaration, and must make urgent amends.

Recently, the Kichwa tribe have been organising and getting help from groups like the Forest Peoples Programme, an organisation that advocates for Indigenous land rights.

Kichwa leaders have gone to court to find out how much money was raised by the credits.

And at meetings with CIMA, they have demanded compensation or restitution.

A Kichwa activist, Marisol Garcia, said that Kichwa tribe carry out barefoot patrols in the forest to confront illegal ranchers and coca growers. Yet, when they report illegal tree clearing, the authorities responded that it is none of their business.

“Nobody thinks about defending the defenders of the forest,” she said.