The finding of the century

THE STAR – British archaeologist Howard Carter made the find of the century. Deep within Egypt’s majestic Valley of the Kings, he unearthed the intact tomb of the pharaoh Tutankhamun, a young monarch who ruled over the realm in its 18th Dynasty.

The opulence of the treasures within, and the magnificence of the burial objects, amazed Carter, and captured the world’s imagination. An obsession for ancient Egypt, called ‘Tut-mania’, soon arose. Images of pyramids, pharaohs and Tutankhamun’s iconic death mask made their way into the books, art, movies and fashion of the time.

As if the discovery wasn’t exciting enough, there were also rumours of a curse. Many people who had entered the tomb began to die unexpectedly, although Carter himself was apparently spared. Speculation soared, with many believing this was the pharaoh’s supernatural retribution on the explorers for disturbing his resting place.

Most modern scientists scoff at the idea of a curse. But what if there was a rational explanation for the mysterious deaths surrounding Tutankhamun’s tomb?

The new National Geographic documentary, Tut’s Toxic Tomb, re-examines this famous excavation, and analyses if there was more to the story.

The documentary, which premiered on November 26 (exactly 100 years since Carter’s landmark discovery) is hosted by Ella al-Shamahi, a renowned British archaeologist, paleoanthropologist and National Geographic Explorer. 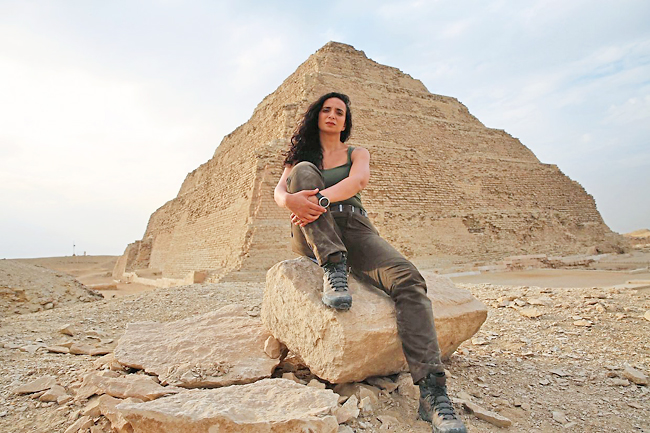 “It’s the 100-year anniversary, and many people are celebrating Tutankhamun, especially in light of all the recent scientific discoveries nowadays. But we were also interested in this side story, this so-called curse that now is part of the mythology of the discovery.

“The more we thought about it, the more we researched, and the more we realised that it was an interesting story in its own right,” said Ella, speaking in a Zoom interview from Britain recently.

A real-life Lara Croft, Ella is renowned for finding fossils in caves in unstable and hostile territories, such as Syria and Iraq. Her adventurous spirit, and passion for exploring places most people are wary of treading, made her the right woman for the job.

“So those locations are massively understudied. And that’s not just bad for science, it’s also not good for those places, because I believe that no place should be left behind.

“I believe that there are big scientific discoveries just waiting to be made there,” Ella said.

In Tut’s Toxic Tomb, our intrepid host first travels to the place that started it all, the resting place of Tutankhamun in Egypt. She then takes a trip to Krakow, Poland to interview a professor who was also involved in the opening of another supposedly-cursed tomb.

Viewers learn that there may indeed have been factors in the excavation that led so many to die: the answer, however, may be more medical than supernatural.

A scientist through and through, Ella does not believe in curses, and was amused to find people who actually took them seriously.

“When I started this show, I just assumed no one believed in the curse. I thought we would just be deconstructing why people back then thought it to be true. And then I discovered, no, people really do believe in it! And I was massively surprised,” she said.

A journey centred on tombs and curses may seem scary, but Ella recalled her experiences with a breezy humour, casually speaking about how it was to witness one of the ancient wonders of the world first-hand. “The pyramids are quite spectacular. But I think that what many people tend to forget is that they’re in the middle of a city.

“For us, it’s like, it’s the pyramids! And everyone else there doesn’t react like that. For them, it’s probably just part of the scenery. It must be like looking at the Empire State Building when you live in New York,” Ella quipped.

The documentary takes a scientific look at the background behind the deaths attributed to the curse, and raises insightful questions for viewers to ponder.

Shooting it, however, came with challenges, and not just the sweltering Egyptian desert heat.

Ella recounted how many things went wrong during the early stages of their experience, to the point where the crew joked that perhaps they too had been cursed. For example, they would receive news that a huge discovery had been made, only to be told it had all fallen apart once they were already flying there to document it.

The most difficult aspect, however, was the historical background of the story.

“It’s hard to uncover a cold case from 100 years ago. We wanted to be good and responsible with the science, but at the end of the day, this happened a century ago.

“Nobody is still alive, there are no reliable medical records that we can check up on. A lot of this is historical detective work, and the science involved is pretty complicated. It was very challenging, and there were many question marks,” Ella said.

Also difficult? Trying to get her team to try the local cuisine.

“I was desperately trying to get the crew and production team to eat koshary, which is the national dish in Egypt. I got nowhere with any of them. I’ve been to Egypt before and I know that this food is really amazing, but everyone else, they were having none of it. So I just ended up having a lot of it myself, which was fine,” Ella laughed.

In the end, thankfully, everything worked out well, and the filming of Tut’s Toxic Tomb proved successful. “Tutankhamun was quite a fascinating character. He was this boy king, married to his sister. But the thing about him was, he didn’t have the biggest tomb.

“He wasn’t the most significant pharaoh in history.

“But a lot of people, we’re fascinated by treasure. We like bling! And there has never been a pharaoh’s tomb found like that before, just filled with gold. And that brought this story right into our imagination,” Ella said. “Ancient Egypt is already quite fascinating to most people. And the circumstances behind his tomb’s discovery were quite interesting. “Then you have the whole thing with the curse! Even one or two of these elements would already make a compelling story. Here you have all of them. That’s why we still remember the story of Tutankhamun’s tomb even today.”

What’s next for Ella? There’s the filming of Our Changing Planet, a documentary which she describes as the biggest environmental or factual series the BBC has ever made. An expedition to some caves in East Africa is also on the cards.

Ella added that she hopes to someday see the discovery of the tomb of Imhotep, a legendary Egyptian chancellor and high priest. Imhotep is the author of many ancient wisdom texts and is believed to be the architect of the Step Pyramid of Djoser. The ancient Egyptians treated him as a god after his death.

“I think what’s fascinating about the Tutankhamun story is it shows you don’t know where the next big discovery is going to come from. This figure wasn’t even on most people’s radar at the time.

“So it’s really great to think, today, there are still a whole lot of archaeological discoveries that are just waiting to be made. Someone will find them, we don’t know where or when. And I find that really exciting,” Ella said.