THE WASHINGTON POST – For whatever reason, the science of genetics seems to gin up rivalries.

James Watson and Francis Crick vs Rosalind Franklin in the 1950s. Craig Venter and Celera vs Francis Collins and the Human Genome Project in the 1990s. These days, it’s Jennifer Doudna vs Feng Zhang in a potentially multi-billion-dollar battle over the DNA-editing technology CRISPR.

The first two rivalries spawned classic book-length accounts – Watson’s controversial The Double Helix: A Personal Account of the Discovery of the Structure of DNA and the madcap The Genome War: How Craig Venter Tried to Capture the Code of Life and Save the World by science writer James Shreeve. Now, for CRISPR, biographer Walter Isaacson is making a bid for the canon with his sweeping new book, The Code Breaker: Jennifer Doudna, Gene Editing, and the Future of the Human Race.

Isaacson’s motivation for writing the book was simple. “There’s a joy that springs from fathoming how something works,” he said. Moreover, CRISPR is the most powerful DNA-editing tool humankind has ever possessed, and “figuring out if and when to edit our genes”, he noted, “will be one of the most consequential questions of the 21st Century”.

The story of CRISPR’s discovery is convoluted, pin-balling from labs in Japan to salt ponds in Spain to a yogurt factory in Wisconsin. In short, CRISPR is an ancient defence system that bacteria use to kill viruses by shredding genetic material. The scientists who discovered and described it were motivated by pure curiosity. Before long, however, they realised that CRISPR’s ability to cut DNA also provided a means to edit DNA. 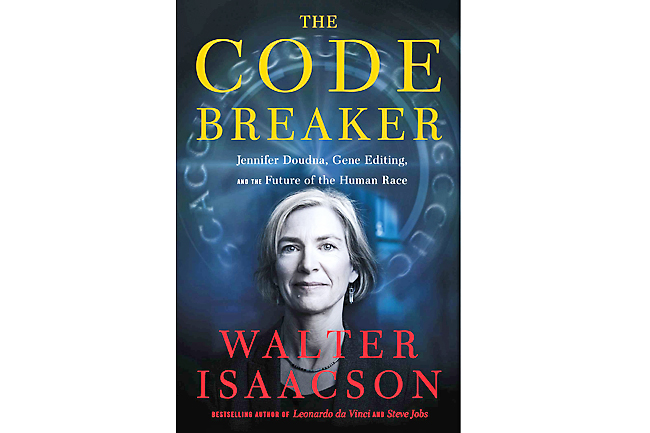 A joint team led by Emmanuelle Charpentier in Europe and Jennifer Doudna at the University of California at Berkeley eventually succeeded in editing bacterial DNA with CRISPR and won patents for this work. However, a team led by Feng Zhang at the Broad Institute, a private Harvard-MIT partnership, first edited human cells, which are more complicated, more important medically and far more lucrative. In the end, Zhang won the patent for human cells. A furious Doudna challenged this in court, arguing that Zhang had done nothing except take the next, “easy and obvious step” in a technology she pioneered.

Narratively, the two combatants form a perfect contrast: the American Doudna at the West Coast public school vs the immigrant Zhang at the elite East Coast lab. Still, while enticed by the drama, Isaacson ultimately rued the patent battle for wasting time and money. As a counterpoint, he highlighted the early microchip industry, where would-be rivals cross-licensed their patents and then got to work actually making things, to everyone’s benefit. There’s a lesson here, he sardonically noted, “Don’t fight over divvying up the proceeds until you finish robbing the stagecoach.”

The book’s only real flaw can be seen in the title, The Code Breaker, singular. As a biographer – he’s done Steve Jobs and Leonardo da Vinci, among others – Isaacson focussed on one main character here, Doudna.

It’s an understandable choice. Readers need a human face to attach to the science, and Doudna, who, along with Charpentier, recently won the Nobel Prize for CRISPR, is the most glamorous character in the field. Isaacson isn’t afraid to show her sharp edges, either: She’s deeply competitive and fiercely jealous about credit for her work. Still, much like the Nobel Prize does, focussing on Doudna skewed our perceptions. Science nowadays is highly collaborative, and dozens upon dozens of scientists contributed to perfecting CRISPR. Unfortunately, the Nobel Committee arbitrarily limits the prize to three people. It’s ridiculously restrictive.

Similarly, for all the seminal work Doudna did, CRISPR is not “her” discovery. And however well Isaacson covered the other players, she’s still his singular code breaker, and it’s still her face gracing the cover.

Toward the end, the book shifts into the ethical dilemmas that CRISPR could unleash if humans start editing our DNA.

Isaacson argued that the coronavirus pandemic will hasten the acceptance and deployment of CRISPR. After all, CRISPR began long ago as a virus-fighting tool in bacteria, and after more than 118 million coronavirus cases worldwide, engineering our bodies to resist disease seems far less radical. If nothing else, CRISPR might have provided the cheap, rapid testing we needed last spring to nip the pandemic in the bud.

Isaacson also argued that the pandemic will permanently remake science itself, “reminding scientists of the nobility of their mission”.

Still, the pandemic has cooled the battle over credit for CRISPR, as labs like Doudna’s and Zhang’s have pivoted to coronavirus research. For now at least, they’ve shifted the spotlight back to patients, not patents.