The evolution of Kratos

THE WASHINGTON POST – In the pantheon of video game protagonists, Kratos is up there with Mario and Master Chief. The original God of War in 2005 introduced players to the ruthless Spartan warrior molded by savagery and haunted by his past. Subsequent titles throughout the 2000s and early 2010s saw Kratos carve a bloody path through Greek mythos. The narrative in these early games often took a back seat to the theatrical boss fights and brutal combat. At their best, these games portray a deeply troubled man reckoning with the monster he’s become; at their worst, they cement Kratos as a caricature of barbarity.

2018’s God of War rebooted the series and marked the beginning of a more serious take on the brutal anti-hero – one that’s been met with near-universal acclaim for its portrayal of themes of fatherhood and redemption.

“I think a lot of people going in (to the reboot) felt like Kratos was a pretty irredeemable character,” said narrative lead on the latest entry in the series God of War Ragnarok Matt Sophos. “Going into the last one and then (Ragnarok), you know, we evolved that hopefully in most people’s eyes.”

Longtime fans were quick to portray the franchise’s tonal shift as the “daddification” of Kratos; the change corresponded with the introduction of his son Atreus who accompanies his father through the realms of Norse mythology.

But the team behind the series at Sony’s Santa Monica Studio doesn’t quite see it as a transformation for his character. Ragnarok producer Cory Barlog and director Eric Williams, two of the leads behind God of War from day one, said in an interview with The Washington  Post that the reboot marked less of a new direction and more of Kratos coming full circle.

Sophos echoed this sentiment, noting that the character of Kratos has always been defined by his relationship with fatherhood.

“This was kind of a chance for us to really kind of examine parts of fatherhood that we didn’t before because in the last series, his being a father and a husband is what led to a journey of revenge,” Sophos said.

As shown in a flashback in the original God of War, the death of Kratos’ wife and daughter set the events of the series into motion, the first casualties in a string of betrayals that define his character arcs. After rising through the ranks to become a general, Kratos commands an army of soldiers to lay siege to Sparta’s enemies. But when his forces are overwhelmed in battle, Kratos pledges his life to Ares, the god of war, to turn the tide. Ares tricks Kratos into severing his last remaining connection to his humanity, his family, who Kratos slaughters in a blind rage while pillaging in the god’s name. 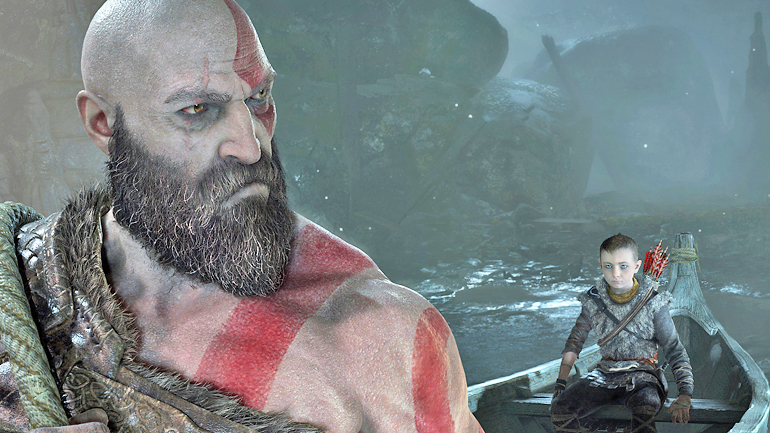 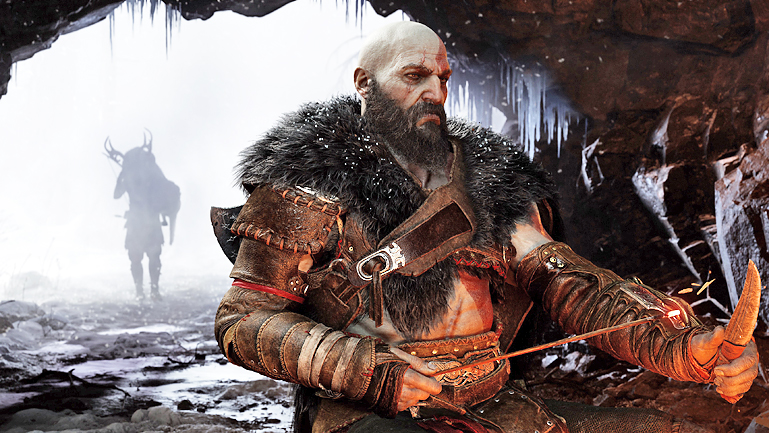 Once he realises what he’s done, Kratos is overwhelmed by grief. Distraught and vengeful, Kratos serves the other gods of Olympus, who promise him an escape from his torment. But after obeying their command for years and eventually slaughtering Ares himself, he realises this was yet another trick. The alliances he forges with titans, denizens of the underworld and other deities on his quest for revenge all end similarly: in a trail of destruction and slaughtered foes that leads Kratos no closer to finding peace.

While he forges forward unflinching throughout all this, Kratos is not as detached from the atrocities as he appears in these early games.

“He’s very aware of the fact that he wasn’t the good guy in his story,” Sophos said.

By the end of God of War III, Kratos is clearly buckling after facing betrayal after betrayal while in service to the gods of his homeland. He uncovers the horrible truth of his lineage: That Zeus is his father, and the person who ordered his brother, Deimos, kidnapped as a child in an attempt to prevent the prophesied fall of Olympus. In his quest to kill Zeus, Kratos bonds with Pandora, who reminds him of his daughter, and through that bond begins to develop hope that he may finally be able to forgive himself, only to watch her die as Zeus mocks him for failing to save anyone who gets close to him.

After he finally defeats Zeus, Kratos is at his lowest point, Barlog said. The God of War reboot takes place an undetermined number of years later, after Kratos has built a family in the land of the Norse gods with his wife, a fellow warrior named Faye, and Atreus. Barlog said this relationship with Faye (which plays out off-screen) shaped the man players were reintroduced to in the 2018 reboot just as much as his newfound fatherhood.

That’s a process Kratos finds himself navigating alone once again in 2018’s God of War, which begins after Faye’s death, leaving Kratos to navigate single parenthood and the unanswered questions she left behind. Though it’s not under circumstances he would have ever hoped for, this gives Kratos the opportunity to rediscover himself and confront the emotions he ran away from in previous games.

“We were really focussing in on who he is, not in the grand scheme of mythology and that kind of stuff, but just who the guy is, who Kratos is and what he’s dealt with and what he fears, and those trappings,” Sophos said.

Earlier God of War games offered glimpses of this more complex world going on inside Kratos, Williams said. Particularly God of War: Ghost of Sparta, which shows a young Kratos as a caring and protective brother to Deimos even among the harshness and cruelty of their
Spartan upbringing.

“Those parts have always been inside of him to do good, to do the right thing, it’s just that people broke him, and when he got broken, he couldn’t deal with his own guilt,” Williams said.

All three developers expressed that Kratos, after fleeing to the land of Norse gods, still thoroughly believes that his horrible past has forever stained him – like the ashes of his family have been cursed to stain his skin – but he doesn’t want to taint his son with that too. The 2018 reboot “is really about him learning to be a better person in general”, said Sophos, “and that kind of evolves from him really taking on the mantle of being a true father rather than someone who’s just provided the necessities for his family”.

The stakes in 2018’s God of War are high. There is no running away from his grief this time; to ignore his failings would mean to risk seeing them reflected in his son, Barlog said. Until Faye’s death, he had kept his own history and Atreus’ demigodhood a secret from Atreus.

But faced with the reality of Atreus growing into powers he does not understand, he realises he must open up about the sordid details of his past. This informs the core conflict at the heart of the reboot.

“It’s that idea of how much of ourselves do we show our children, especially the parts we’re not proud of, especially if those things can help them in some way to either guide them away from paths that you took,” Sophos said. “But you’re still ashamed of them and you don’t want to do it. And that was something that felt so perfect for Kratos as someone who really does have a lot of things he’s not proud of.”

A real-world element contributed to this part of Kratoss development: Barlog, Sophos and Richard Gilbert, Sophos’ longtime writing partner and a narrative designer for the series, all had young sons around the time of the reboot’s development. The parallels in their lived experiences informed how they navigated Kratos’ transition from Greek to Norse mythology and, more importantly, from a vengeful soldier to a father once more.

“I think that’s the biggest thing that we did was make Kratos relatable in a way that he probably wasn’t before,” Sophos said.

While Kratos travels with Atreus to fulfil his wife’s last wish to spread her ashes at the top of the highest peak in the nine realms, the two secure something Kratos never had in the earlier games: an entourage. The father-son duo stumbles into a found family dynamic with the dwarven brothers Brock and Sindri and the Norse god of wisdom Mimir, a development Kratos initially resists. He distances himself, refusing to refer to them by anything other than reductive nicknames like “head” for Mimir (because, well, he’s a talking head). Even his own son is “boy” instead of Atreus. But their camaraderie chips away at these walls. By Ragnarok, that prickly demeanor has softened considerably – he calls Atreus, Mimir and the rest of his crew by their names throughout the game.

“He’s reliant, as much as he doesn’t want to be, on others,” said Barlog, revisiting the well analogy. “And those others are the muscle, the hands, on that rope that is pulling him out… they’re helping to pull the human side of him back out of a well that he dug for a long time.”
Part of this development stems back to the end of God of War when Kratos and Atreus spread Faye’s ashes and uncover yet another hidden lineage. Faye was a giant, which makes Atreus half giant and half god. A prophecy reveals that Kratos is not long for this world and that Atreus, known as Loki among the giants, will somehow be involved in his death.

Understandably, Atreus has questions about his lineage. Kratos, blindsided by the revelation of Faye’s past just as much as Atreus, has to reconcile with the fact that he has zero answers. This is a problem he can’t fix.

“And that’s the hardest part for a parent when you can’t give them (your child) what they want,” Williams said.

On top of that, he knows he must quickly prepare Atreus for a world without him, and with that knowledge comes vulnerability. He’s grappling with his shortcomings and trying to make peace with knowing he must now lean on his newfound connections to fill in the gaps in Atreus’ development. That’s particularly the case when it comes to channelling his emotions and handling anger, Sophos said, since historically “when he lets out that emotion, it usually goes to a bad place”.

The looming specter of his death is at the front of Kratos’ mind heading into Ragnarok. To prepare Atreus to survive in a world without him, he’s forced to reckon with the shame he’s shouldered quietly since Greece so Atreus can understand how to avoid making the same mistakes. Kratos doesn’t want Atreus to be like him; he wants him to be better, and that means committing to his own personal growth.

“Kratos is just doing his best to kind of guide him on what he sees as the safest path, the path to where his son will survive, even if he doesn’t,” said Sophos.

“Even if you aren’t a parent, you can still identify with wanting to be better for somebody, you know, wanting to do right by someone and hope for the best for someone.”