THE WASHINGTON POST – I’ve tried a bunch of strategies to increase my intelligence, and you probably have, too. I’ve made flashcards to memorise the definitions of archaic words. I’ve subscribed to daily crosswords. I’ve eaten avocados and salmon. I studied the French language and had a brief affair with German.

What did I get for it? Mediocre scores on standardised tests. A bunch of unfinished puzzles. Shinier hair.

The power to order a coffee and baguette in Paris and come in third place at a karaoke contest in Leipzig. But I can’t say any of those tactics made me noticeably smarter.

Annie Murphy Paul’s new book The Extended Mind: The Power of Thinking Outside the Brain adeptly taught me why all these tactics were wrong and, more important, how to cultivate the sources of intelligence we already have available to us.

Paul, a biology and social science writer, argues that the problem with our thinking about intelligence is that we believe it solely resides within the isolated organism of the brain. Her revolutionary thesis challenges us to rethink what we think about thinking.

Our bodies, our social networks and our surroundings, she argues, are “extra-neural” inputs that have a profound influence on cognition. Intelligence can be found, in part, in our brains, but perhaps even more importantly in our hearts and skin, in the architecture of the physical spaces we surround ourselves with and in the friendships we keep.

As a result of our mistaken beliefs, we’ve focussed our efforts to get smarter on our brains. It is quite possible that we have invested our time and money in the wrong ways, as we haven’t seen the advances in society and ourselves that we are capable of realising. 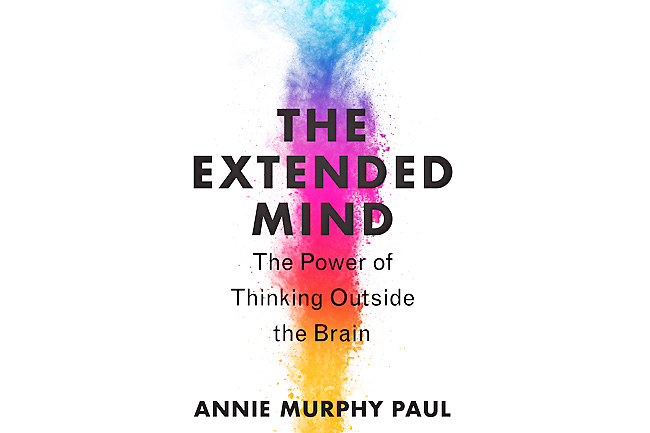 Our outdated assumptions about where intelligence comes from also leave us flummoxed by paradoxes like this one: how London resident Ben Pridmore can remember the order of 1,400 randomly shuffled playing cards but can’t remember his friends’ birth dates.

However, if we accept Paul’s premise and change our thinking about the source of great thought, we can revolutionise childhood education; transform the healthcare system; take concrete steps to improve diversity, equity and inclusion in the workplace; outperform the market; and find the source of motivation, innovation and well-being in our personal pursuits.

In The Extended Mind, Paul branches out from her previous books, Origins: How the Nine Months Before Birth Shape the Rest of Our Lives and The Cult of Personality Testing: How Personality Tests Are Leading Us to Miseducate Our Children, Mismanage Our Companies, and Misunderstand Ourselves.

In this volume, she teaches us about socially distributed cognition. She engagingly weaves together diverse narratives to explain this form of intelligence, which isn’t found in just one person but emerges as multiple minds collaborate. Paul recounts a story told by Edwin Hutchins, a naval psychologist, who was on board the aircraft carrier Palau when its engines failed.

The captain, navigator, quartermaster chief and navigation team jerry rigged the machinery, brawn and brains they collectively shared to avert disaster as the ship barreled through the water on a crash course for San Diego Harbour. In another story, Paul describes the synergy and cohesion in teams that participate in morning calisthenics routines that are broadcast over Japanese radio and are followed by corporate executives from Toyota and Sony, public schoolchildren, and all types of people in between.

In a third, she drops us in the middle of a fight between Brad Bird, an Academy Award-winning Pixar director, and John Walker, his producer, as they work out the animation details for The Incredibles. Paul explains how their abrasive yet mutually respectful communicative style, which they publicly display for their teams to see, is so critical to their collaborative success. To illustrate the impact of physical spaces on cognition, Paul tells the stories of those in a unique career path who experience both the bane and the beauty of their environs: astronauts.

We hear about the inspiring majesty of Alan Shepard’s view as one of the first to see what our planet looks like from space. Paul juxtaposes that with the visual boredom that the Mir space station’s claustrophobic capsules induced for NASA astronaut Michael Foale, and how he farmed “space broccoli” inside as a self-prescribed cure.

Paul tells the story of Michel de Montaigne, a 16th-Century thinker who might have been the first to design a man cave and style it in ways to promote deep thought.

She shares reflections by the American architect Louis Kahn on the transformative effect on mental well-being of the 150-foot ceilings in ancient Roman public baths, and his rationale for why the monolithic pillars of the Salk Institute that frame the view of the Pacific Ocean in San Diego can foster expansive thinking.

And she evaluates the upsides and downsides of modern “hoteling”, or non-dedicated working spaces, on the productivity and creativity of office workers.

In probing the contents of those offices, Paul evaluates the treadmill desk. Scoff as many of us might, she couples the experiences of Nobel laureates like Daniel Kahneman and Carl Wieman with contemporary neuroscientific studies to explain the benefits of physical movement for cognitive focus and memory.

She uses this work to convincingly highlight how the daily routines at school – with its relative dearth of recess time – are doing a disservice to the development of children’s attention span.

Paul heralds the unusual technique of medical students at the Universitaire Pitié-Salpêtrière in Paris, who act out the physical sensations of Parkinson’s tremors and cerebellar syndrome’s slurred speech to learn about neurological disease and inspire more research on these ailments.

Paul does not offer do’s and don’ts for designing childhood education centres, corporate office floor plans, public parks or our own homes. She does not advise directly on how to prepare for a public address at a shareholders meeting, how to gesture to most effectively persuade others or how to best take advantage of the collective intelligence of teams.

However, the diverse and deeply researched information she presents about the impact of our surroundings, our bodies and the people around us on our thought process can certainly be translated into that.

Our minds are bigger than our brains, and if we embrace that fact, there’s so much more we can accomplish.