THE WASHINGTON POST – In the past century, astrophysicists have coalesced around the notion that our universe resulted from a big bang, when our prenatal universe was so small, hot and compressed that matter and time effectively did not exist.

The evidence of this has mostly come from calculating several known quantities of universal expansion, chiefly its speed and contents, and running the tape in reverse to arrive at the universe’s first minuscule fraction of a second.

In her book, Before the Big Bang: The Origin of the Universe and What Lies Beyond, quantum cosmologist Laura Mersini-Houghton focusses on the prequel to this galactic episode, pondering what happened beforehand that put our universe in the position to be banged open.

There is no physical evidence for this era, so it’s a little like investigating a murder before the murder’s taken place. But this quandary is still possible to explore, at least in the field of theoretical physics.

Theoretical physicists take a different approach to solving problems, which explains the old joke that a physicist is happiest when she identifies new questions instead of new solutions.

New questions – especially ones unanswerable with human equations, theories or principles – imply a bigger discovery is still out there that, if you’re lucky, will lead to a dramatic reordering of our understanding of our universe and its building blocks. 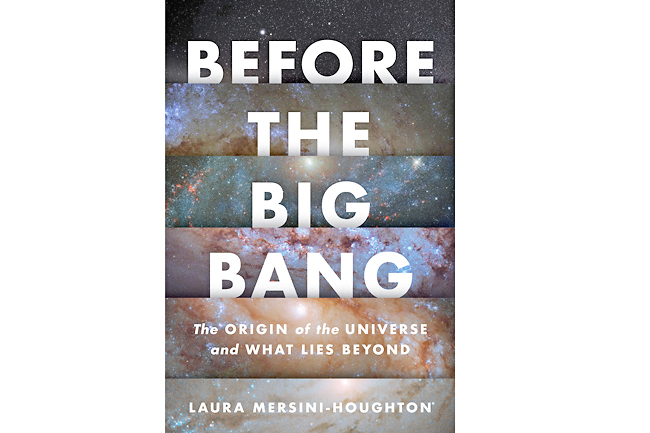 Lucky for Mersini-Houghton, a professor at the University of North Carolina, you don’t need expensive equipment to arrive at theoretical conclusions.

You can have a breakthrough while sitting in a coffee shop staring at your notebook, which is where she admits she had her first inkling of the universe’s origins.

By combining quantum mechanics, which explores how light and matter behave at subatomic levels, with string theory, which posits that energy and matter behave as tiny vibrating strings, she realised that our universe appeared to be a “wave function” of a much larger multiverse.

And to take it one mind-boggling step further, her theory allows that, so long as there is sufficient energy to go around, it’s possible new universes can be created as routinely as a queen bee popping out worker bees.

This is a remarkable finding when you consider that the universe may have been born from such modest pre-bang origins.

It’s also remarkable for Mersini-Houghton, who intersperses her scientific theories with compelling memories from her constrained childhood. She was born during the Cold War in Albania, a country she describes as poor, paranoid and cut off from the rest of the world – “the North Korea of Europe”, she wrote.

Her father, a university professor, sparked her imagination with books and art before he was exiled to the countryside. His fate was not bad in comparison; others in his family were imprisoned or killed.

There are incredible scenes from Mersini-Houghton’s life that demonstrate her sense of emotional whiplash, which almost certainly helped her build such a durable and vivid mind.

After another of her father’s forced absences, he persuaded his wife to claim in court that he abused her, so that she could be granted a divorce and keep the children in the family home.

By chance, the judge hearing the motion was a childhood friend of Mersini-Houghton’s father and spotted the ruse instantly. The divorce was denied, sealing the path of the family. But then the path changed again. Her dad was permitted to return home, and the family stayed together.

Or there’s the brush with chance when a British economist came to Albania in 1992 on a development mission. He and Mersini (in the days before she added the Houghton) became friends, but it wasn’t until he surprised her in the Zurich airport, paged her over the loudspeaker and informed her that he had bought the seat next to her to accompany her to her new adventure in the United States that their future was settled.

Students of physics and the broader sciences will be deeply fascinated by this riveting tour of the cosmos from one of the brightest minds in astrophysics.

But for anyone who got an A-minus or lower in high school physics and longs for the Cliffs Notes version, here it is: Our universe is large, far larger than we can conceive of, and possibly part of a strangely behaved multiverse, and it all started from a point infinitesimally small that erupted in a bang indescribably big.

Mersini-Houghton has the receipts to prove it, or at least to show how she arrived at her persuasive conclusions. She soberly admits that her multiverse theory isn’t for everyone.

At one point she recalls when, during a debate with another astrophysicist, the two mostly agreed that only about half of their colleagues believe in the multiverse, and of those, there are a handful of different ideas about how it’s shaped and how it behaves.

But uncertainty about how energy expands is the propulsive force behind cosmology in general, and it’s also how Mersini-Houghton seems to consider her path as a scientist.

A spot of energy exploded, and a young girl from an unlikely place changed our sense of space and time. Sometimes boundaries can lead to remarkable things.