The best PlayStation exclusive since ‘Bloodborne’

THE WASHINGTON POST – The best traits of modern Sony titles are manifest in Ratchet and Clank: Rift Apart. It is the greatest exclusive title for a PlayStation platform since 2015′s Bloodborne.

Rift Apart calls to mind the believable and heart-wrenching interpersonal drama of The Last of Us. There’s the fast-paced, dodge-and-shoot rhythm and screen-filling particle effects of the other recent PS5 exclusive, Returnal. Ratchet’s charisma and charm feel natural in ways that would shake Uncharted hero Nathan Drake’s confidence. And of course, developer Insomniac Games uses its experience from Marvel’s Spider-Man to stage dazzling set-piece action like we’ve never seen in the platformer genre.

Sometimes, it even reminds me of the best games from other platforms and genres. As Ratchet, I visited the barren, mystical planet of Sevali and rocketed around it as I might across a map in Destiny. As Rivet, Ratchet’s alternate dimension counterpart, I sailed through the skies and between enemy ship formations on a fire-breathing dragon, recalling the classic video game propensity to reimagine wyverns as fighter jets.

Eventually, the game breaks into all-out war, and it becomes easier to imagine a next-generation Halo game thanks to bewitching creature designs and lively animation popping through a mobbed, action-packed battlefield. As more dimensional rifts open to unleash armies upon you, I realised I was playing the inverse of the Avengers: Endgame finale. Instead of Thanos facing portals of Marvel’s heroes, it’s a pair of fuzzy space cats against a never-ending stream of alien hordes.

This alone would make Rift Apart, the first major game released exclusively for the modern console generation, easy to recommend to almost anyone. But everything, from the game’s presentation to its writing, elevates it above even the series’s past high watermarks. 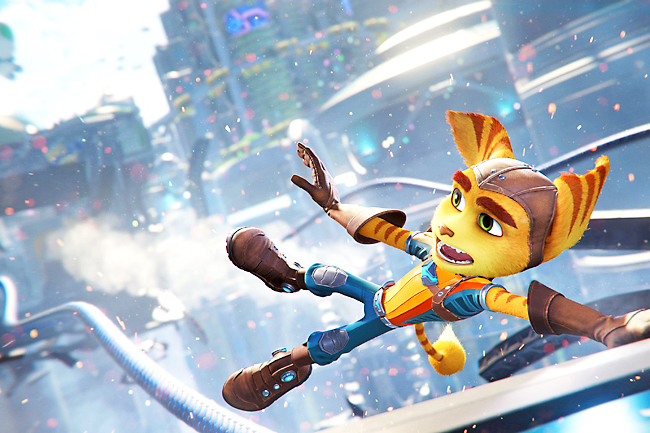 Let’s start with the remarkable animation work. It’s been an old aspiration for video games to surpass Pixar films in visual quality; the Ratchet and Clank series has quietly led that march. The original games, whose development team included PlayStation console architect Mark Cerny, were already the best showcases for those earlier consoles. On the PlayStation 5, Rivet’s tight-lipped smile and reserved nods belie her reluctance to trust anyone else, and it’s in sharp contrast to Ratchet’s wide-mouthed, teeth-baring, all-too-eager disposition. The animation fulfills an actor’s duty to communicate the unspoken.

While Insomniac has always employed top-shelf animators in the games industry, Rift Apart proves the studio stands at the vanguard of modern-day animation. They carry on a proud cartooning tradition of painting the rich tapestry of human expression as bold, bright faces on anything, be it a robot or a Lombax, the nearly extinct race of alien space cats of which Ratchet and Rivet remain the sole survivors.

The dimensional rifts, the game’s headlining feature, held much promise for novel gameplay possibilities, but sadly there’s little that approaches the playfulness and creativity of even 2007’s Portal. The rifts mostly operate as a way for the player to navigate maps, whether it’s to swing to “open rifts” like they’re grappling points, or warping you to a completely different location. Otherwise, it’s an enchanting visual trick, made possible with the PlayStation 5′s powerful hardware.

The adventure bounces between the two heroes at the player’s whim, with Rivet exploring one part of the galaxy and Ratchet the other. They’re both on a mission to fix the interdimensional mess left by fan favourite villain Dr Nefarious, who dragged the heroes into a universe where he’s already won and dominates as an emperor. The pacing of depicting two different heroes working separately toward the same goal feels like a practice run for the inevitable Spider-Man sequel with more than one web slinger, and Rift Apart both displays and instills confidence in this balancing act. It’s also important to note that playing as Rivet is no different from controlling Ratchet, which makes sense, considering the premise of alternate dimensions.

Clank and Ratchet’s new AI companion Glitch each get gameplay elements of their own, per series tradition. Clank must fix the dimensional problem via Lemmings-style puzzles, in which the player must lead all possibilities of Clank toward a single goal. Glitch is an endearing mess of self-consciousness, and her tiny little slice of the story became an inspiring tale of perseverance and determination.

The cast is as colourful as the stages they’re set upon. Legendary voice talent Jennifer Hale (of Mass Effect fame) is unrecognisable in the youthful, cautious Rivet. She leads a slate of other great performances that humanise this story about robots and space cats. Dr Nefarious is also a comedic highlight, with long-running jokes about his out-of-character progressive work policies and his losing streak getting the incredible payoffs they deserve.

Without Rivet and her relationships to characters old and new (one of whom I won’t spoil here) Rift Apart probably wouldn’t be as special. Game director Marcus Smith told me that the studio wanted to tell a story that was less timely (like the early game’s criticisms of corporatism and pop culture) and more timeless. Lead writer Lauren Mee has spun a yarn that succeeds on those merits, with Rivet coming to grips with a lonely life. Life experiences inform how we bridge relationships and who we trust, but Rivet has grown up in a world full of lies and deceit. How do you work with anyone when almost everyone you’ve ever met is a liar?

Rivet’s journey to finding faith in others hits its own, heart-rending rough patches. When she feels a sense of betrayal, you can tell she doesn’t know what to do with the re-opened wound, and it ends up hurting more people than just herself. Although some contrived urgency ensures all will be well in the end, these moments still pack a punch.

The story of Rift Apart hits at deep, unspoken insecurities. It will prick at them before reassuring you. It might remind you of your own evolving friendships. In a time when sneering, ironic detachment remains in fashion, Insomniac Games has created the rare modern masterpiece with no convoluted agenda, no subtext – just so many reasons to smile and laugh. This purity is felt through every pixel, every line reading and every planet. We’re lucky to have it in Ratchet and Clank: Rift Apart, the first great game of the new console generation.