The battle to build a child-friendly metaverse

PARIS (AFP) – As a young woman straps on her vest and headset and becomes immersed in a virtual world, Mainak Chaudhuri talks excitedly about the potential of the technology.

“This is the first step towards the metaverse,” Chaudhuri of French start-up Actronika told AFP at the recent VivaTech trade show in Paris.

The vest can give users the sensation of being buffeted by the wind or even feel a monster’s breath on their back, and it can be used to enhance movie watching, education or gaming. It is a family-friendly vision of the 3D immersive Internet, now widely known as the metaverse, and sits well with some interactive experiences already widely available for children – like virtual trips to museums.

But campaigners and experts are increasingly warning that the wider ecosystem needs to start acting on child safety to ensure the benign vision is realised.

“The biggest challenge is kids are getting exposed to content that is not intended for them,” said Kavya Pearlman, whose NGO XR Safety Initiative campaigns to ensure immersive technology will be safe for everyone.

The problems she envisages range from children being exposed to sexual and violent material, to worries over young people being used as content creators or having inappropriate contact with adults. 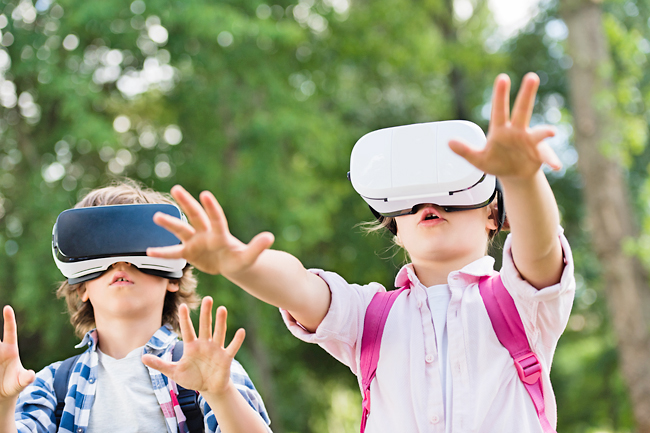 Even though the metaverse has not yet been widely adopted and the technology is still in development, early users have already brought to light serious issues.

One woman’s allegation that her avatar was sexually assaulted in the metaverse sparked global outrage.

Worries about the future of the technology have only grown as the economic opportunities have become clearer. Metaverse-linked investments topped USD50 billion last year, according to research firm McKinsey, which predicts the figure could more than double this year.

Chief among the investors is tech giant Meta, which owns the likes of Instagram, Facebook and WhatsApp. The firm has already rolled out measures to give parents more control over the content their children interact with while using VR headsets.

Meta and many of its competitors market immersive products with a lower age limit of 13 – though it is widely accepted that younger children will use the tech.

Pearlman raises a broader concern that very little is known about the possible effects on young people’s development. “Organisations have not yet validated these experiences from a scientific perspective,” she said. “Yet they are allowing kids to be exposed to these new technologies, practically experimenting on children’s developing brains.”

The metaverse has shifted the paradigm, according to Valentino Megale, a neuropharmacologist who researches the issue. While the public has so far merely consumed what others have created, in the metaverse “we are going to be part of the digital content”, he said.

“This makes everything that we experience in that world more compelling,” he told the RightsCon digital rights conference recently, adding that it was particularly true for children.

Experts worry that the industry needs scrutiny before the rot sets in. The solution, they argue, is to make sure the builders of these new virtual worlds instil child protection measures into the ethos of their work. In other words, each piece of software and hardware should be constructed on the understanding that children might use it and will need safeguarding.

“We are potentially going to have a huge impact on their behaviour, their identity, their emotions, their psychology in the exact moment when they are forming their personality,” said Megale. “You need to provide an ethical basis and safety by design from the beginning.”

One of the most controversial areas of product design is the kind of suit that will allow users to feel all sorts of sensations – even pain.

Such suits are already being manufactured, simulating pain through electric shocks. The products are intended for military or other professional training.

Chaudhuri said the products developed by his firm Actronika use vibrations rather than electric shocks and were perfectly safe for anyone to use. “We’re about engaging the audience and not necessarily doing a real-time firefighting scenario or a battlefield scenario,” he said. “We don’t cause pain.”