THE WASHINGTON POST – Much as I value serious literary fiction, I find reading it to be exceptionally draining. All that raw emotion! Unhappy families being unhappy in their own ways! Bad things happening to good people! Tragic endings. Faced with a potentially heart-rending novel, I’ve always found it wise to take a few deep breaths and steel myself for the worst.

By contrast, consider nonfiction. Briskly informative. Upbeat. Positively restful. Ten minutes at bedtime with an essay collection, biography or self-help book and you immediately begin to nod off. There’s none of that staying awake till 3am. because you need to finish just one more chapter or because you’re so rattled by The Good Soldier that you can’t sleep.

Still, even a dry-seeming nonfiction category like books about books – a librarian might label them “studies of print culture”- can be dangerously fascinating. For instance, I spent several happy hours unable to tear myself away from Howdunit: A Masterclass in Crime Writing by Members of The Detection Club (HarperCollins). Edited with astute commentary by the club’s president Martin Edwards, this substantial volume gathers 90 essays – both old and new – on the cunning and devious artistry employed by leading authors of crime, suspense and adventure fiction. Recently nominated for an Edgar Award, the book opens with GK Chesterton’s observation that the detective story is the form that best captures the poetry of modern life, and closes with a memoir by the collection’s 91-year-old dedicatee Len Deighton, whose first novel, 1962’s The Ipcress File, stands high among the great espionage classics.

Anecdotes, reminiscences and pointers for would-be mystery writers abound throughout Howdunit. Christianna Brand suggests that six or seven suspects should be the limit, while Lionel Davidson recalls how he came to write his magnificent thriller, The Rose of Tibet. To justify his practice of launching into a first draft without knowing where he’ll end up, Andrew Taylor cites EL Doctorow: “Writing is like driving a car at night. You can only see as far as your headlights, but you can make the whole trip that way.” In his turn, Peter Robinson quotes an editor’s comment on one of his early manuscripts: “Something should happen now.” That might be the best general writing advice I’ve ever come across.

Poet Dana Gioia opens Studying with Miss Bishop: Memoirs from a Young Writer’s Life (Paul Dry Books) with an account of his childhood reading, which was kick-started – like my own – by a passion for Edgar Rice Burroughs’ adventure fiction. Other pieces recall two Harvard courses with the translator Robert Fitzgerald and a disorganised poetry seminar given by the chain-smoking Elizabeth Bishop, “Several times in each class she would throw up her hands and say, ‘I have no idea what this line means. Can anyone figure it out?'” 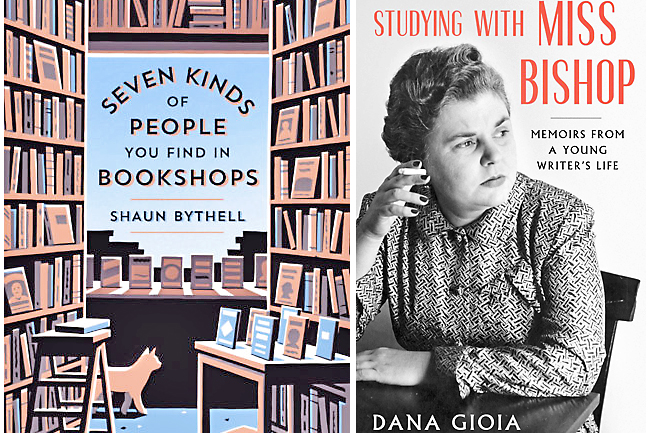 Elsewhere, former chair of the National Endowment for the Arts Gioia writes about John Cheever, James Dickey and an underappreciated poet named Ronald Perry. These, too, are lovely works of recollection. But then remembrance, as Gioia pointed out, is the métier of poets. “After all, our Muse is the daughter of Memory.”

For the past 60 years G Thomas Tanselle, widely esteemed for his bibliographical scholarship, has been collecting copies of all the titles – and, even more ambitiously, all the printings of those titles – issued by 44 American publishers between 1891 and 1930. He has now donated his books, some 14,000 altogether, to Yale’s Beinecke Library, which has celebrated this formidable gift with American Publishing History, a 278-page overview of The Tanselle Collection.

Because of its resolute focus on completeness, Tanselle’s collection allows one to explore the full range and character of imprints as familiar as Knopf, as artsy as Copeland & Day or as unusual as Haldeman-Julius, which produced mini-paperbacks of progressive thought called the Little Blue Books. For any collector or student of early 20th Century literature, American Publishing History is inspiring.

Shaun Bythell, author of Diary of a Bookseller and Confessions of a Bookseller, continues his seriocomic take on his profession in Seven Kinds of People You Find in Bookshops (Godine). Among the numerous subspecies he skewers are the loiterer, conspiracy theorist, bearded pensioner, occultist and aspirational parent. Bythell spares no one, “Ancient, crumbling and often, the secondhand bookseller is self-employed for no other reason than that they have no choice. Nobody in their right mind would ever give a job to someone so completely devoid of the most rudimentary social skills.”

For the past several years Haruki Murakami has been a leading candidate for the bounty of Sweden, as John Updike referred to the Nobel Prize in literature. Yet the Japanese novelist owes much of his early success to Alfred Birnbaum and Jay Rubin, his American translators. David Karashima’s Who We’re Reading When We’re Reading Murakami (Soft Skull) recounts how these two men, and a handful of committed editors, brought The Wild Sheep Chase and The Wind-Up Bird Chronicle into English.

This is, in effect, a behind-the-scenes secret history, one that Murakami fans – or devotees of publishing gossip – will find almost as irresistible as those early novels.

In the development of modern fine printing, no one was more influential than multitalented William Morris, who in 1891 founded the Kelmscott Press. In Morris & Company (Oak Knoll), William S Peterson assembles 11 learned and entertaining essays that cast new light on several British and American champions of the “ideal book”.

In one article, Peterson – a distinguished professor emeritus of the University of Maryland – reproduces selections from the correspondence of the celebrated printer Daniel Berkeley Updike and book designer and artist Thomas Maitland Cleland; in another, he transcribes you-are-there extracts from the memorandums of the Kelmscott Press’ business manager Sydney Cockerell. When the black printing ink used by Morris’ company starts to leave mysterious yellow stains, the resulting horror is palpable and the hunt for an explanation nearly as gripping as a Detection Club mystery.