RIO DELL, CALIFORNIA (AP) – Outside a general store, a store manager ticked off the items she had to share with families trying to restart their lives after an earthquake pushes them from their beds and cut off the town’s water and power.

“Batteries or candles?” a worker asked a mother holding her child and handed the toddler a plastic candy cane filled with sweets.

Just days before Christmas in Rio Dell, the town grappled with the aftermath of early Tuesday’s magnitude 6.4 earthquake that injured at least 17 people, shook homes, damaged water systems and left tens of thousands without electricity, some for more than a day.

By Wednesday afternoon, power was restored to the homes of tens of thousands of residents and street lights around the community’s main street came back on. However, according to local officials, most of the town’s 3,500 residents still lacked safe drinking water.

Rio Dell City Manager, Kyle Knopp, said that 26 homes were deemed unsafe, leaving an estimated 65 people homeless. Another 37 homes were damaged, and those that suffered no physical cracks required intense cleanup inside, where the floors were cluttered by knocked down shelves and broken dishware.

By Wednesday night, Pacific Gas & Electric announced that it had restored electric power to essentially all of the approximately 70,000 customers who had quake-related outages. 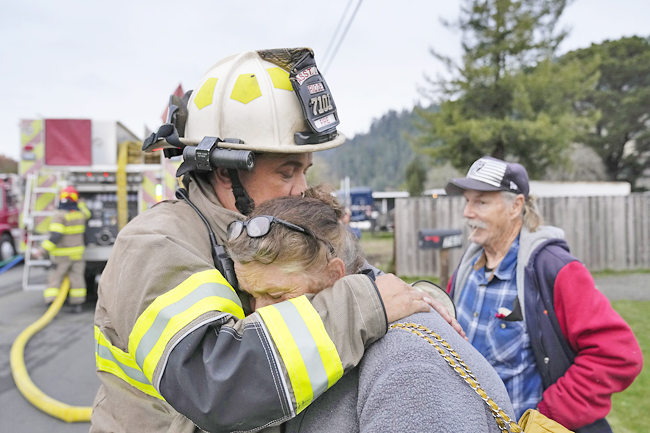 Along the Northern California’s coast, earthquakes are common. But the one that shook people from their homes was different to many who found themselves tossed violently from their beds and stumbling around in the dark of night in search of safety.

When his house began to shake, Chad Sovereign ran into his 10-year-old son Jaxon’s room, grabbed him, and dove under a door frame. The brick chimney collapsed, pulling the wall with it and leaving a hole in their home.

“It felt like the end of the world,” Sovereign said. “I was telling him I love him. I didn’t say goodbye to him, (but) in my head I was”.

He said that the family lost water and power after the quake, but fortunately they could remain in their home. They filled up their bathtub with whatever water was left before the shutoff and used it to flush the toilets.

The quake was centred in nearby Ferndale, about 345 kilometres northwest of San Francisco and near the Pacific coast. The area is known for its redwood forests and scenic mountains as well as the Mendocino Triple Junction, a geologic region where three tectonic plates meet.

On Wednesday, the community fire station was turned into a drive-through hub where residents can replenish their food supplied by World Central Kitchen and water supplies.

The once bustling lumber town with shops in the 1970s is today a small community made up of retirees, commuters and renters. When a nearby mill went bankrupt and a major thoroughfare moved, Rio Dell became a shadow of its former self, residents said. But it remains a place where people relies on each other for help to rebuild their damaged properties.

Dollar Store Manager, Cassondra Stoner, said she was told she could distribute water, batteries and candles but to hold off on other items until they could be inspected – something she couldn’t always do. “I couldn’t help myself, and I gave somebody one ibuprofen and some baby diapers because I am not going to let a kid go without diapers,” she said.

The Dollar General is the main grocery in Rio Dell. Locals said that there’s also a hardware store and a pizza place in a town which are used to earthquakes knocking products off its shelves and causing damage to inventories but rarely lowers their spirits.

Editor of the Rio Dell Times, Sharon Woll, said that “We see news reports that this place had a 3.6, and it’s like, ‘Oh, please.’”

Nearby Ferndale, which draws tourists to its picturesque Victorian Village, also lost power and a key bridge to the community was shut down. The owner of Mind’s Eye Manufactory and Coffee Lounge, Marc Daniels said that shopkeepers hoped to bounce back quickly once the lights came back on.

“We know how bad it could have been,” said Daniels. “We feel like we sort of dodged a bullet this time”.

About 17 people were reported injured and two people died, an 83-year-old and a 72-year-old because they couldn’t get timely care for medical emergencies during or just after the quake.

While more than half of the 72,000 Humboldt County customers who lost electricity when the quake struck had power restored by Tuesday evening, some still went without power and water throughout the night. Boil water advisories were issued for Rio Dell and parts of Fortuna because of damaged water systems. In Rio Dell, portable toilets were set up downtown.

Celia Magdaleno, 67, said she hauled a container of water from her neighbour’s swimming pool back to her home in order to flush the toilet. She said she took rainwater she had captured in a barrel and heated it so her husband could bathe before his dialysis appointment.

Having access to water “means a lot”, she said. “It’s a very big blessing for me”.

Nathan Scheinman, 24, said he used four blankets but could barely sleep through the cold with the shock of the quake repeating in his mind. He lost gas, water and power, and had to drive to find a usable bathroom.

Right now, Scheinman said rather than thinking about the holiday, he is trying to help people who come into the hardware store where he works with whatever he can in their time of need.

“I want to be there for people the best way I can,” he said.