In conjunction with the birthday celebration of Her Majesty Queen Suthida Bajrasudhabimalalakshana of Thailand tomorrow, the Royal Thai Embassy and the Thai community in Brunei Darussalam put a smile on the faces of the students of Pusat Ehsan Al-Ameerah Al-Hajjah Maryam (Pusat Ehsan) with a “Good Deeds from the Heart” activity yesterday.

“Good Deeds from the Heart” was initiated by His Majesty King Maha Vajiralongkorn Bodindradebayavarangkun to set up the Royal Initiative Volunteers in tribute to the late His Majesty Bhumibol Adulyadej The Great, Rama XI and Her Majesty Queen Sirikit The Queen Mother for their contributions to Thailand.

The activity encourages unity and happiness among the people and stability for the country as a whole.

The initiative has widespread support abroad providing an opportunity to Thai communities overseas to perform good deeds to the society and express gratitude to the countries they reside in.

Ambassador-Designate of Thailand to Brunei Darussalam Boosara Kanchanalai and members of the Thai community in the country presented Thai delicacies to students and staff of Pusat Ehsan.

The embassy and the Thai community in the Sultanate has contributed and supported Pusat Ehsan’s numerous fundraising activities. 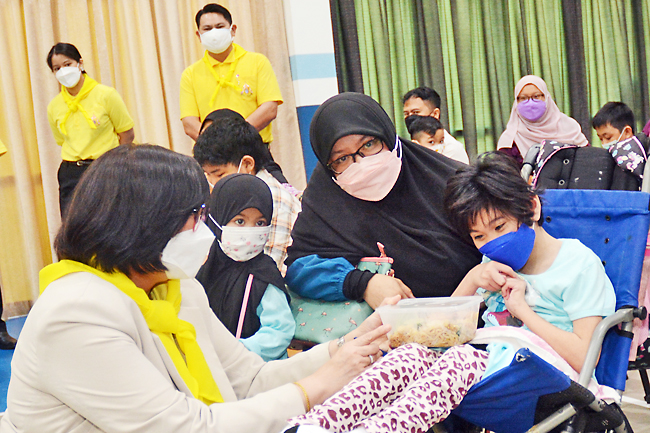