AFP – The fortunes of Silicon Valley billionaires took a beating in 2022 as share prices of the world’s tech giants plummeted.

Here are some of the worst hit by this year’s tech stock downturn.

After becoming the world’s richest person in 2021, the Tesla and SpaceX boss saw over half of his net worth evaporate this year, boosting France’s luxury goods mogul Bernard Arnault into the top spot.

Musk lost USD140 billion in 2022 due to the collapse of Tesla’s share price, leaving his total net worth at USD130 billion, according to Bloomberg’s index of the world’s richest people.

Once the darling of Wall Street investors, the future of the electric car company is now under question after Musk pushed through with a USD44 billion buyout of Twitter that many observers see as an expensive distraction.

Musk largely financed his USD44 billion buyout of Twitter by selling off shares in Tesla, putting the share price into an even steeper downward spiral. 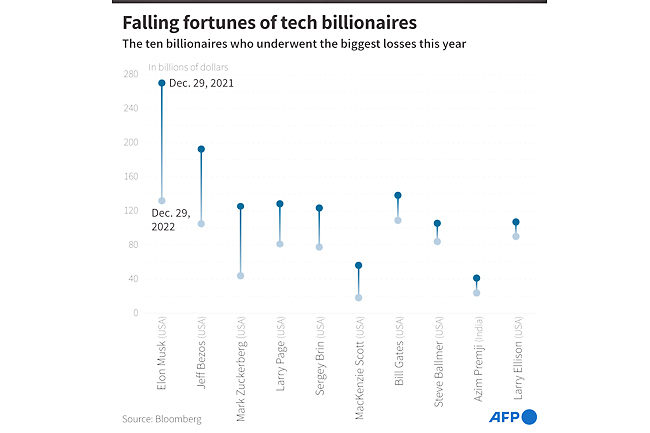 The Facebook founder has put all his efforts into promoting the so-called metaverse, but investors are not as confident that the world will be going completely virtual anytime soon.

The share price in Meta, Facebook’s parent company, has fallen off a cliff in 2022.

Wall Street’s lack of confidence has sliced USD81 billion off of Zuckerberg’s fortune, leaving it at USD44.4 billion as of December 28.

Meta has faced stiff competition from breakout app TikTok and – like archrival Google – is plagued by a morose advertising market as the world economy faces a downturn amid high inflation.

Since stepping down as CEO of Amazon in July 2021, Bezos has devoted much of his time to developing space exploration projects through his company Blue Origin.

His fortune however remains heavily tied to the online retail giant’s share price, which has fallen by more than 49 per cent in 2022.

Bezos, who remains as Amazon’s executive chairman, has lost more than USD86 billion this year, leaving a fortune estimated at USD106 billion.

The 58-year-old entrepreneur and owner of the Washington Post also told CNN in November that he planned to donate most of his wealth to charity during his lifetime.

The two Google founders have not helmed the company since 2019, but remain board members of parent company Alphabet, which also owns health, artificial intelligence and other subsidiaries.

Alphabet’s share price has declined 39 per cent since January, punished by declining online advertising revenues and increased competition from Apple and Amazon.

They are still the 10th and 11th richest people on the planet, according to Bloomberg.

The Chinese billionaire is an outlier to the tech debacle. The founder of TikTok-owner Bytedance saw his fortune rise by USD10.4 billion in 2022.

But storm clouds are looming for TikTok as political pressure builds in Washington over accusations that the app’s immense success leaves the US vulnerable to China.

Federal officials have already banned TikTok on government phones and are reportedly mulling whether to force Bytedance to sell its US version of the app.