BERLIN (AP) — Freiburg coach Christian Streich (AP; pic below) shed tears and joined fans in the stand after his team beat Augsburg 3-0 in the Bundesliga on Sunday.

It was Freiburg’s last game in the scenic Dreisamstadion with its Black Forest views, which the club had been enjoying since 1954. The club’s senior team is moving after the international break to a new, bigger stadium on the other side of the city.

The 56-year-old Streich – the longest-serving coach in the Bundesliga – joined supporters after the game.

First, he put on a protective face mask, then he grabbed a megaphone, and he climbed a barrier to acc ess the stand behind one of the goals, where he led supporters’ chants in front of his team sitting on the field. 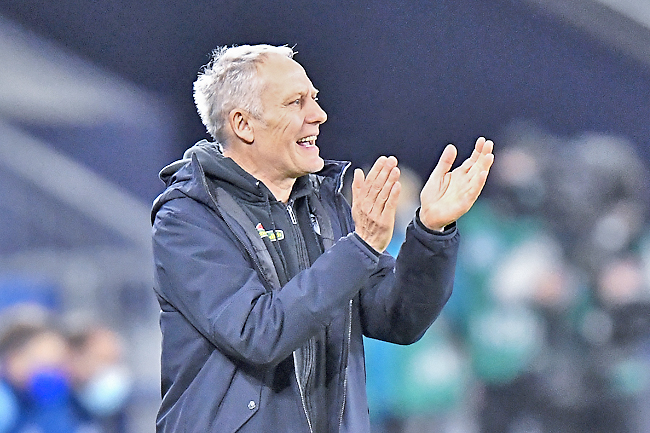 “But I couldn’t do it any other way and it was okay to do it like that.”

Streich’s players attacked from the start against Augsburg, forcing an early corner, before Lukas Kübler opened the scoring in the sixth minute. Kübler scored off a rebound after Rafa Gikiewicz saved Günter’s initial shot.

Lucas Höler lifted the ball over Gikiewicz for Freiburg’s second in the 25th, and Vincenzo Grifo converted a penalty for 3-0 in the 31st. It was the 999th goal scored in 360 Bundesliga games at the stadium. And the last.

Streich took over after the final whistle before supporters enjoyed a rendition of You’ll Never Walk Alone.

Former Freiburg coach Volker Finke, who led the club to its first Bundesliga promotion in 1993, and former German soccer federation president Fritz Keller were among those present.

Freiburg is one of only two unbeaten teams in the Bundesliga after six rounds. Bayern Munich, which stretched its lead at the top to three points over the weekend, is the other team.