DOHA (AFP) – Cristiano Ronaldo left the World Cup in tears, walking off down the tunnel with his dreams of winning the trophy in tatters.

Morocco earned a shock 1-0 quarter-final victory over Portugal, the north Africans’ joy the stark opposite of Ronaldo’s misery.

The Portuguese forward, 37, may never have another chance to win the game’s biggest trophy, and his World Cup exit was especially bitter as he started the game as a substitute.

With another result Ronaldo might have celebrated levelling the all-time men’s international appearance record with his 196th Portugal cap, but his final minutes were desperate.

As soon as the final whistle blew, Ronaldo left, heading down the tunnel with tears streaming down his face, ignoring the Morocco players rushing to their fans to celebrate.

“If you take two people that are the most upset perhaps it was Cristiano Ronaldo and myself,” said Portugal coach Fernando Santos. 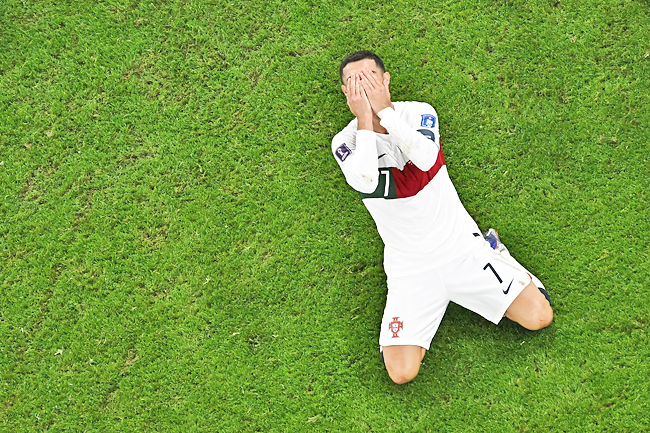 Ronaldo won Euro 2016 with his country, albeit being taken off injured during the win over France in the final and watching from the sidelines as Eder became his country’s hero.

The World Cup remained a dream for both Ronaldo and his country but they fell short against surprise package Morocco.

In a surprise decision, Ronaldo had been relegated to the bench against Switzerland as Portugal romped to a 6-1 victory in the last 16 and Santos maintained that plan.

However, shortly after half-time, with his team trailing to Youssef En-Nesyri’s goal, Santos threw on Ronaldo and Joao Cancelo, looking to their all-time leading scorer to bail them out.

Ronaldo struggled to get involved in the game, with Morocco swarming him whenever the ball was close.

The striker had only one sniff at goal, but Moroccan stopper Yassine Bounou got down quickly to deny him.

Asked if he regretted starting with Ronaldo on the bench, the coach maintained he was content with his choice.

“I have no regrets, I think this was a team that played very well against Switzerland,” added Santos.

“Cristiano is a great player, he came in when I thought that was necessary, so no, I have no regrets.”

After picking himself up from World Cup disappointment, Ronaldo will have to decide his future in the game at club level.

The forward and Manchester United parted ways with a bitter divorce at the start of the tournament and Ronaldo is currently without a club.

That saga overshadowed Portugal’s start to the tournament, after Ronaldo gave an explosive interview in which he blasted his former employers and coach Erik ten Hag.

Ronaldo netted a penalty in Portugal’s opening game of the tournament against Ghana to become the first player to score at five men’s World Cups.