Tchouaméni says he picked Madrid despite talk with Mbappé

MADRID (AP) — Aurélien Tchouaméni said nothing steered him away from fulfilling his dream of playing for Real Madrid. Not even a chat with Kylian Mbappé.

The promising France midfielder made his move to Madrid official yesterday, saying he had no doubts about where he wanted to play despite having offers from other clubs and discussing a possible transfer to Paris Saint-Germain (PSG) with Mbappé, who recently decided to stay with the French club after showing interest in playing for Madrid.

“Kylian stayed with PSG and he knew I was leaving Monaco, so he wanted to know if I could go to PSG,” Tchouaméni said as he was officially introduced by Madrid.

“But I told him that my first option was always Real Madrid and he understood it perfectly.”

The 22-year-old Tchouaméni signed a six-year contract with Madrid. He joined from Monaco on a reported fee of up to EUR100 million, including variables.

Tchouaméni did not say which other clubs made offers. He said he was just waiting for Madrid’s call. 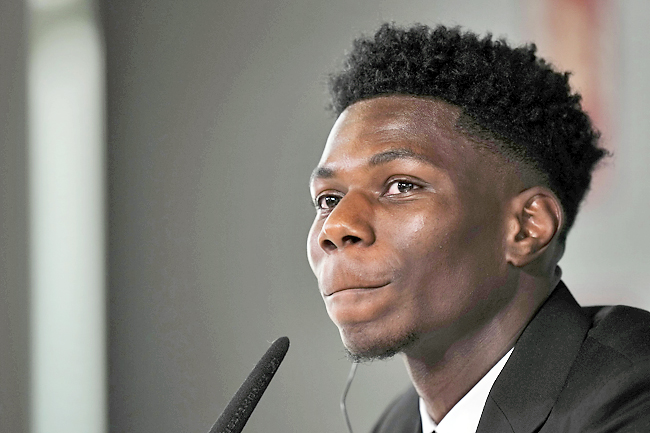 “The moment Madrid called I told my agent and the club to find the best deal for everyone,” he said. “I didn’t doubt it for a second. It was my dream. I want to leave my mark in football and Madrid is the best club where I can do that.”

Mbappé, Tchouaméni’s teammate on the French national team, upset Madrid and its fans after backing down from a free-agent move to the Spanish club this season. PSG had already turned down an offer from Madrid last year.

Tchouaméni made his first statements speaking well in Spanish, saying he was happy to be joining “the best club in the world” and to have a chance to help it win more titles.

He said he is inspired by American basketball greats Koby Bryant and Michael Jordan, because “they always gave their maximum to be able to play at a high level”, and said he will contribute with good field vision, passing, physical strength and ability to regain possession.

Madrid last year brought in 19-year-old Frenchman Eduardo Camavinga from Rennes, who impressed playing off the bench throughout the season.

The club recently gave Modric a one-year contract extension until June 2023. Kroos’ contract also is good until the end of next season, while Casemiro’s deal is valid until 2025. The trio helped Madrid win five Champions League titles in the last nine seasons, including this year against Liverpool.

“We have a great squad but we know we have a big challenge ahead and we need to add players who are talented and eager to win, so today we bring a magnificent player who will help us keep improving.”

Pérez thanked Tchouaméni for having “chosen Madrid instead of other clubs”.