Take my breath away

Among Allah the Almighty’s greatest creations is the occurrence of solar and lunar eclipses, with the phenomena serving as a reminder for Muslims to be grateful and enhance their faith (iman).

Last night, the Sultanate witnessed a total lunar eclipse and the experience was undoubtedly memorable with the public attending a gathering organised by the Astronomical Society of Brunei Darussalam (PABD) at Balai Khazanah Islam Sultan Haji Hassanal Bolkiah (BKISHHB) to view the spectacle.

A total lunar eclipse occurs when the Earth comes between the Sun and the Moon and its shadow covers the Moon. Eclipse watchers can see the Moon turn red when the eclipse reaches its totality.

In an interview with the Bulletin, PABD executive member Mohammad Husaini bin Ali Hassan said that last night’s total lunar eclipse was first observed after the moon rose at 5.56pm and reached its peak at 6.59pm.

He said the PABD organised last night’s gathering at the BKISHHB to offer the public a medium to witness the breathtaking phenomenon. 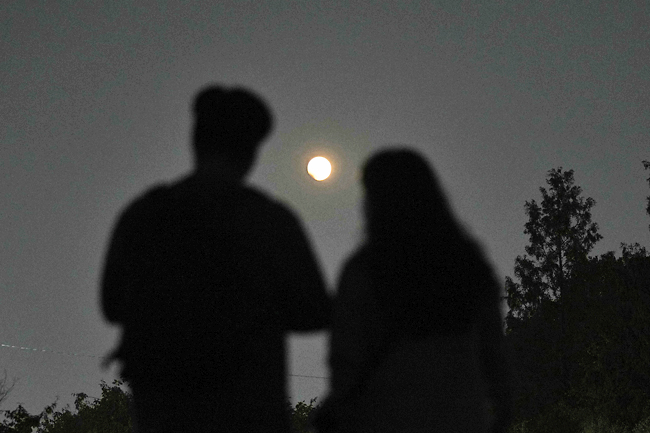 The lunar eclipse is a natural phenomenon in which the sun, earth and moon are located in an aligned position, Husaini said, adding that “the phenomenon occurs when sunlight does not reach the Moon as it is blocked by Earth”.

The lunar eclipse occurs when the moon passes part of earth shadows, with this phenomena only occurring during full moon and when the Sun, Earth and Moon are in an aligned or nearly aligned position.

The types of eclipses and how long the period of lunar eclipse takes place depend on the location of the relative moon to the orbit node. In addition to sighting the lunar eclipse, the public could also watch planets such as Uranus, Jupiter and Saturn that were close to the Moon.

“The next phenomena will occur on April 20 next year, involving Annular or total solar eclipse,” he said.

He said that when Prophet Muhammad’s (pbuh) son Ibrahim passed away, an eclipse suddenly occurred. The community at the time believed the phenomenon was tied to Ibrahim’s passing, which Prophet Muhammad (pbuh) denied.

The sighting of the total lunar eclipse, organised by BKISHHB and PABD, last night aimed to enhance public knowledge relating to lunar eclipses and the field of astronomy, especially from an Islamic perspective.

It also aimed to gather eclipse watchers and astronomy enthusiasts (falak) in Brunei Darussalam to learn and conduct more research pertaining to the phenomena, allowing for knowledge upgrade.

At the same time, it was held to provide a venue for the public, researchers as well as those seeking Falak Syar’ie knowledge to acquire in-depth knowledge on astronomy equipment.

The collaboration will continue periodically with activities to include stargazing and sighting planets such as Mars, Jupiter and Saturn, scheduled to take place in December this year, as well as sundial workshops and school holiday exhibitions.