BANGKOK (AFP) – Two Taiwan men have been caught trying to smuggle 15 kilograms of heroin in packets of instant noodles from a Bangkok airport, Thai police said, in a kingdom which is a key regional drug route.

Police found the haul inside packets of MAMA noodles – a Thai brand ubiquitous across Asia – as well as tins of prickly heat powder.

The pair were trying to return to Taiwan when they were arrested on January 30 at Suvarnabhumi Airport after a tip-off, police said on Monday, without saying from where the heroin originated.

The lawless border areas of Myanmar, Thailand and Laos have for decades been a hub for heroin.

But the large-scale production of synthetic drugs such as methamphetamine, ketamine and fentanyl has overtaken heroin in recent years.

Opium poppy cultivation in Myanmar fell 11 per cent in 2019 from the year before, according to data released yesterday by the United Nations Office on Drugs and Crime.

But the agency said the region still has around three million heroin users in a market worth USD10 billion. 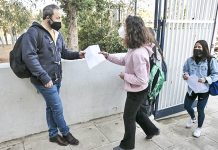