The Royal Brunei Armed Forces (RBAF) as a security institution must continuously commit to maintaining the level of readiness and preparedness in facing whatever threats where in achieving this level, requires a systematic training cycle that leads to the biggest training, that is Hikmat Bersatu (HB) VI.

This was highlighted by Commander of the RBAF Major General (U) Dato Seri Pahlawan Haji Hamzah bin Haji Sahat who officiated the joint exercise in a ceremony at the parade square of Berakas Camp yesterday.

The commander, who also inspected the parade commanded by Head of Doctrine of the Royal Brunei Land Force (RBLF) Lieutenant Colonel Ezan Sazali bin Haji Osman, said, “As in previous exercises, the aim is to test and confirm the capability of the RBAF in planning and implementing operations from routine to complex, and cross-checking inventory and logistic resilience. 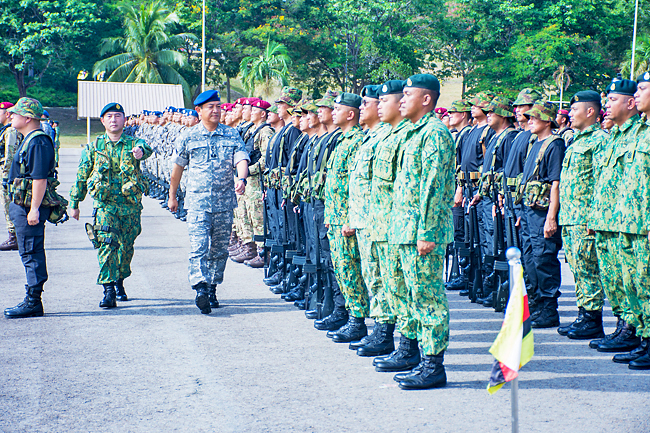 “The exercise is hoped to establish collaboration in supporting whole-of-nation and whole-of-government initiatives, as well as providing an opportunity for personnel from various government agencies to observe the exercise.”

The commander also called on all involved to take the opportunity to identify gaps in terms of asset capability, procedure and doctrine for future upgrade, in hopes of elevating the professionalism level of RBAF personnel in implementing responsibilities with full competency and leadership.

The ceremony, attended by service commanders, joint force commander, senior officers, officers and soldiers of the RBAF, saw Major General (U) Dato Seri Pahlawan Haji Hamzah present armbands to the controllers and umpires of the exercise.

HB VI Exercise aims to provide a comprehensive training opportunity for the RBAF, set in the context of a contemporary scenario, to evaluate the tactical and operational levels of the RBAF in joint military operations, along with reviewing units’ standard operating procedures with focus on non-traditional security threats, including counter-terrorism and counter-illegal activities.