THE WASHINGTON POST – The tribulations of the honeybee are well-known, even if the origins of the mysterious colony collapse disorder that wiped out hives a few years ago are not easily explained.

Then came our awareness of the afflictions of the bumblebee. Of more than 40 species of this beloved creature in North America, half are said to be in decline. One of the most vexing developments is the near disappearance of the once ubiquitous rusty-patched bumblebee over the past 25 years.

There are more than 3,600 species of native bees in North America. Most are solitary, live in the ground and are small. This is why a lot of their natural history is cloudy, even to scientists.

But it is reasonable to think that many of these are in trouble, too, and for the same reasons: habitat loss to development; the reduction of native flora, courtesy of too many deer and the presence of invasive exotic plants; and pesticide use.

“And then climate change is interacting with all those factors,” said Matthew Sarver, a consulting ecologist in Wilmington, Delaware. 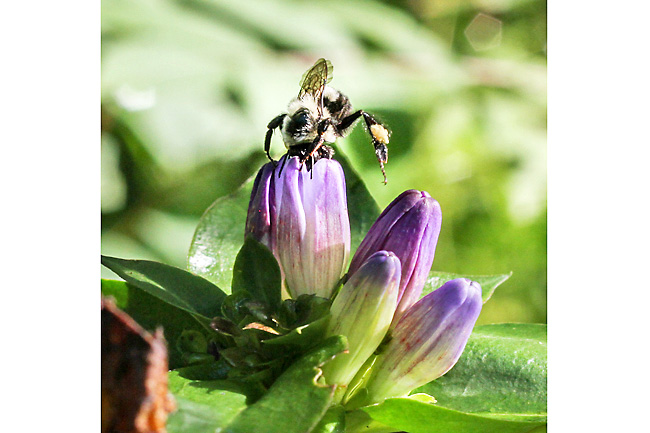 But a new survey by Sarver of native bees and the plants they need offers an encouraging sign that these bees can bounce back if we throw them a lifeline in the form of carefully selected plants in our gardens.

The evidence comes from Mount Cuba Center, a public garden near Wilmington devoted to the study and display of native plants. Eileen Boyle noticed that woodland plants at the former du Pont property attracted little bees that were unfamiliar and, like their host plants, only appeared in springtime.

As the garden’s Director of Conservation and Research, she needed to know more about these visitors, and she asked Sarver to survey the 1,000-acre estate’s native bee populations.

“There’s this hidden world of native bees, some generalists, but we studied it very specifically to look at specialist bees tied to a host plant,” she said.

The survey was conducted in 2018 and 2019 at three sites at Mount Cuba: two natural areas and the extensive cultivated gardens, which include woodlands, meadows and garden ponds. Using hand nets and traps, a total of 3,493 bees were collected, representing 135 species.

The newly published results are encouraging. Sarver identified 15 bee species not previously found in Delaware, three of which were unknown east of the Appalachians, namely the Jacob’s ladder miner bee, a masked bee named Hylaeus fedorica and the summer cellophane bee. The last is a species of “high conservation concern through the northeast”, he wrote. The masked bee is so far from its known range – the nearest record is 700 miles away – that he is awaiting DNA testing to confirm its identity.

For gardeners, the survey brings an important discovery: The greatest diversity of bee species was not found in Mount Cuba’s natural hinterland, but in the gardens.

Plant it, and they will come. This applies not only to the plant selection but also to a planting strategy that provides nectar and pollen during months when blooms are more scarce. That extends, surprisingly, to woody plants, such as the shrubby black willow (Salix nigra), whose blossoms appear in late winter to provide sustenance to a host of native bees emerging early. Another gap can be plugged in late summer with the planting of the helianthus species – the hardy, perennial cousins of the giant sunflower and the wood aster. This flowering might be followed by generous plantings of asters and goldenrods, which bloom until frost and beyond.

Pollinator gardens have gained “a tonne of traction in the last 10 years or so”, Sarver said. But until now, the idea of matching a plant to an insect was confined to planting milkweeds for monarch butterflies. His survey supports the idea of extending that concept to native bees. As many as a quarter of them have evolved in partnership with specific plants.

He found that the Jacob’s ladder miner bee, understandably, required the wildflower Jacob’s ladder (Polemonium reptans), and the rarest find, the summer cellophane bee, needed an alumroot. (Many hybrids and varieties are available, but Sarver said to plant the wild species Heuchera americana.) One bee, Osmia distincta, fed on just three species of beardtongue or penstemon, a summer-flowering perennial.

Most native bees aren’t so picky when it comes to desired plants. These plants were the top species magnets: black willow, a goldenrod named euthamia graminifolia, Virginia bluebell and New York ironweed.

The survey suggests that if enough home gardeners plant targetted plants, the bees’ habitat loss will be mitigated, and the bees will show up.

“These are very small animals; you don’t need 100 acres to make an impact. A tiny bee can do well in a small residential setting,” Sarver said. “It’s a great opportunity for conserving biodiversity, but enough of us have to do it.”