The Super Mario 3D World portion of the package takes the classic Mario games formula and applies it to 3D, meaning in this game, you use 3D Mario game controls like long jumps and butt stomps to navigate courses toward the end goal, the iconic flagpole. Throughout the courses are hidden collectibles like stamps and green stars that unlock special courses and minigames on an overview world map. Toward the end of each section is a castle level with a big boss and a Sprixie to rescue. You do this all while collecting power-ups like the new cat suit to change Mario’s abilities (in the cat suit’s case, you can claw enemies, climb up walls and do diagonal dive attacks).

But the key ingredient to it all? Multiplayer. Adding one-three more players to the screen complicates things quickly. Players are supposed to cooperatively work together to reach the flagpole, but power-ups and coins are limited.

The player ahead of the others will move the camera’s focus ahead, leaving lagging teammates behind (who can hit a button to bubble up and catch up). Each player’s individual points are tallied at the end of levels, and the player with the most points gets a nifty crown to wear in the next stage to showcase their dominance. And funniest of all: The run button also grabs other players. Add the fact that each playable character, Mario, Luigi, Peach and Blue Toad, all have different stats and abilities, and it all adds up to a hilarious balance of cooperation and competition while running through challenging obstacles as quickly as possible.

This is where the two critical changes to the Switch version come into play. These changes radically alter the experience and, in my opinion, make the entire purchase worth it. To start, the gameplay is faster in every aspect compared to its Wii U counterpart. Apart from the obvious faster load-times, characters move noticeably faster, as do enemies and obstacles. It just adds to the hilarious chaos multiplayer offers, as players have to hone their reflexes even more to survive courses. 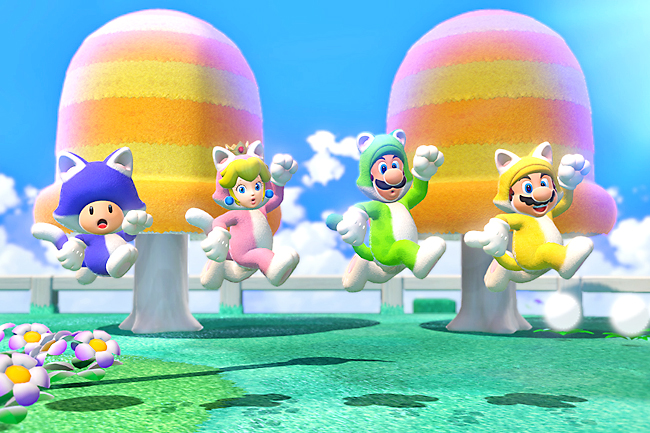 Secondly and more importantly, you can now play the game online with friends. How this wasn’t mentioned more in any of the advertising is baffling, considering how much that radically opens up the multiplayer experience to everyone, especially during these pandemic times.

If you think that the additional content Bowser’s Fury provides is what makes Super Mario 3D World + Bowser’s Fury valuable, I encourage you to reset your expectations. Bowser’s Fury feels more like a testing ground for the next “3D World” entry than a fully developed game by itself.

I went into the experience wanting to like Bowser’s Fury. The setup seemed pretty good – Bowser’s been corrupted by this black ink that looks straight out of Super Mario Sunshine and, coincidentally, Bowser Jr is there hoping Mario can help change his father back. The two tackle a brand new “open world,” where the course-world structure is gone and replaced with a world map where the camera is set free on a 360 degree axis.

Bowser’s Fury lets two players control Mario and Bowser Jr as they set about collecting Cat Shines, this game’s equivalent of power stars. Collecting these Cat Shines powers up lighthouses that further clean up the inky mess and reveal more of the world map. Eventually, you’ll hit a Cat Shine threshold where you can activate the Giga Bell, which allows Mario to go into Super Saiyan Giant Cat form to battle the massively sized Bowser. You need to fight Bowser multiple times until he’s finally completely restored, meaning this game is about continually searching the world for more Cat Shines.

Here’s where the experience begins to fall apart. To start, the overall map feels like an oversized approximation of one of Super Mario Odyssey’s Kingdoms. Because of this, you’ll want every movement option that Odyssey offered in its gameplay and more. But Bowser’s Fury is using Super Mario 3D World’s controls engine, which feels dated for this game’s open-world ambition. You can’t do things every other 3D World Mario game offers, like the triple jump, and you don’t have things Odyssey offered that gave you incredible movement flexibility, like infinite rolling or Cappy-hopping.

Finally, facing off against the Giant Bowser quickly loses its luster when you see it for what it is. The game really tries to play up Kaiju Bowser’s menace. Heck, there is even a part in his theme song that perfectly copies Sephiroth’s theme from Final Fantasy 7. But facing Bowser just looks grandiose simply because it’s bigger. The actual fight takes the same Mario boss formula that’s been here this entire franchise: recognise the pattern, wait for the opening, then jump on two-three times.

The graphics aren’t a noticeably substantial upgrade, and handheld mode for both games had pretty steady framerates throughout (it’s worth noting that Super Mario 3D World was closer to 60 FPS and Bowser’s Fury is closer to 30).

Even with the Bowser’s Fury miss, the content is worth it. If you want one of the best and most versatile multiplayer experiences to date for the Nintendo Switch, online or offline, go with Super Mario 3D World + Bowser’s Fury.

But if you’re looking in particular for the Bowser’s Fury part to surprise you with new Mario gameplay concepts, look elsewhere. Bowser’s increase in size and inky gloss may distract you at first, but trust me, it’s simply covering up more of the same.