Universiti Teknologi Brunei (UTB)can improve its position through reorganising strategies to better its academic reputation, especially in the field of research.

His Majesty also acknowledged UTB’s pursuit of research that is in line with national interests, such as UTB’s project with the Department of Agriculture and Agrifood in vertical rice farming that integrates Internet of Things (IoT) technology, and the publication of research by academic staff.

“I hope that this positive development will continue,” said His Majesty. 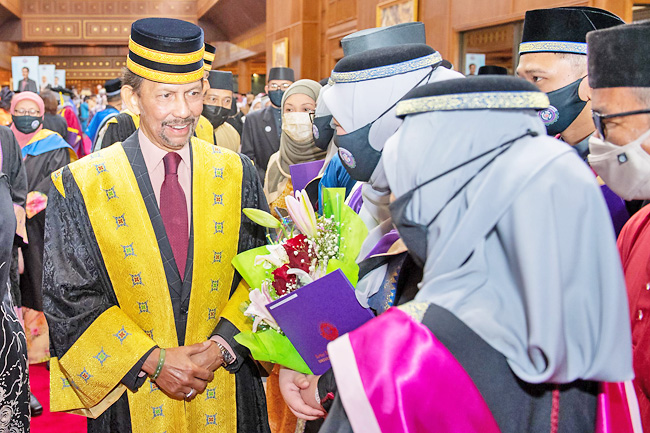 The monarch congratulated the university on its new ranking of 340 in the QS World University Rankings, 85 in Asia and 16 in Southeast Asia, and noted the UTB’s achievement in ranking fifth among Engineering and Technology universities in Southeast Asia, proving it’s ability to compete despite being young in the international arena.

Touching on the COVID-19 pandemic, His Majesty noted its positive impact on digital transformation at education institutions in the Sultanate, as learning was conducted entirely online supported by the government’s faster Internet infrastructure.

“Currently, UTB employs various methods of delivering lessons, including face-to-face, online and hybrid. It serves as a reminder to always be adaptable and resilient in facing challenges by considering the concept of ‘Pandemic Proof University of the Future’,” added the monarch.

His Majesty also welcomed the development of postgraduate micro-credentials for the 2022-2023 academic year, targetting working professionals and new graduates, to provide them with the opportunity to receive a certificate, diploma or Master’s degree within a flexible period.

His Majesty also extended appreciation and gratitude to the university for its contributions and services.