His Majesty Sultan Haji Hassanal Bolkiah Mu’izzaddin Waddaulah ibni Al-Marhum Sultan Haji Omar ‘Ali Saifuddien Sa’adul Khairi Waddien, Sultan and Yang Di-Pertuan of Brunei Darussalam in a titah, reaffirmed the close friendship between Brunei Darussalam and Singapore and acknowledged the wide range of cooperation that has flourished between both countries.

Delivering a titah during a State Banquet hosted by President of Singapore Halimah Yacob at the Istana Singapore yesterday, His Majesty also reaffirmed the importance for Brunei Darussalam and Singapore, as two small countries in Southeast Asia, to work together for continued prosperity and resilience.

Earlier, His Majesty received the Salute of Honour mounted by members of the Singapore Armed Forces, before being introduced to the members of Singapore Cabinet Ministers.

Following the welcoming ceremony, His Majesty attended a courtesy call with the Singapore President to discuss the excellent cooperation between both countries in currency interchangeability, defence, education and people-to-people exchanges.

Both leaders also welcomed the resumption of bilateral engagements with the re-opening of borders, including the 8th Young Leaders Programme held on August 3-5, as well as the signing of four Memoranda of Understanding between both countries.

After the courtesy call, His Majesty attended a State Banquet hosted by the Singapore President. 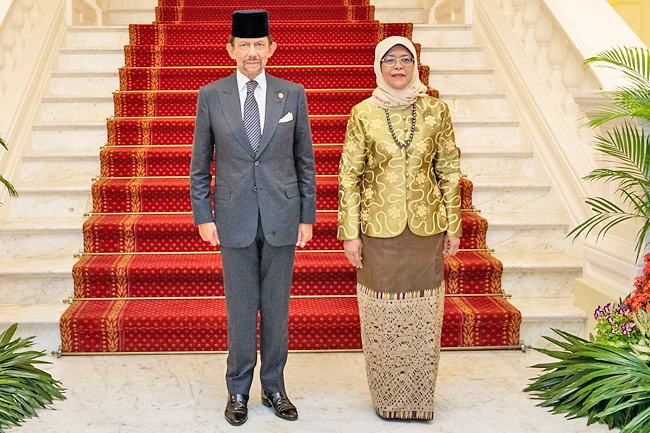 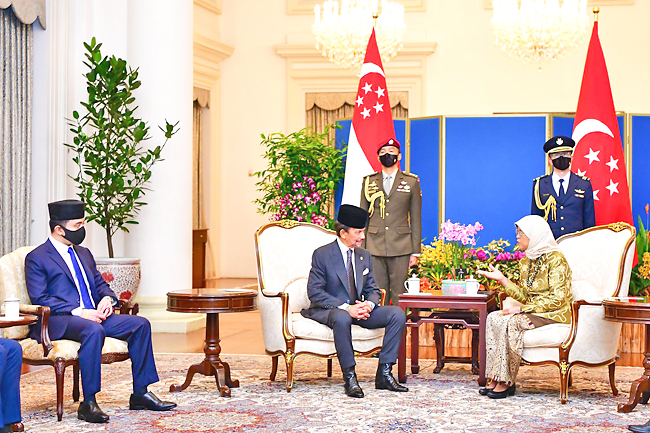 The monarch welcomed the signing of four MoUs during the State Visit in contributing towards the future preparedness of both countries.

In this regard, His Majesty acknowledged and thanked Singapore for the role it has played as a regional partner and friend, as well as its continuous support to Brunei Darussalam.

In concluding the titah, His Majesty looked forward to the further strengthening of the unique and special relations enjoyed by both countries. His Majesty also wished the President, people and Government of Singapore for continued progress and prosperity, particularly on the occasion of their 57th National Day, celebrated on August 9.

Meanwhile, the President of Singapore recalled His Majesty’s first State Visit to Singapore in 1990 and highlighted that this State Visit is a highpoint of high-level exchanges between Brunei Darussalam and Singapore, especially following the re-opening of borders.

She also recalled the recent visit of His Royal Highness Prince Haji Al-Muhtadee Billah, the Crown Prince and Senior Minister at the Prime Minister’s Office for the 8th Young Leaders’ Programme.

In this regard, these exchanges aim to deepen the strong bilateral relationship between both sides, as well as to forge new paths of cooperation.

The president affirmed that the relations between Brunei Darussalam and Singapore are underpinned by longstanding and defence and economic cooperation, including the currency interchangeability agreement established in 1967, which remains a symbol of mutual trust and interdependence.

The Singapore President extended appreciation to Brunei Darussalam for its chairmanship of ASEAN in 2021 towards building a more resilient, people-centric, inclusive, and forward-looking region, particularly during the COVID-19 pandemic.

Furthermore, the president reiterated the special bond between Brunei Darussalam and Singapore, as demonstrated by the close cooperation in areas including vaccinations, supply chains and connectivity between both countries during the pandemic.

Accompanying His Majesty to the ceremonies was His Royal Highness Prince ‘Abdul Malik.